CB is beside himself!

Technically, he’s beside himself three or four times, as he’s out in the Rens system, making multiple jumpclones for distribution throughout known space, but he’s also a little stressed about being back in highsec. I answer questions as best as I can, and try to comfort him as he moves from station to station in the heavily populated market system. His twitchiness is a common problem for anyone who stays out of known space for long stretches — you get hardwired to lock and fire the moment you see a neutral pilot on your overview, and when the overview is showing you a hundred viable targets, you can get a little tense.

“I feel like an old guy on a subway about 15 minutes after a metal concert lets out,” he comments. “Or Clint Eastwood in Gran Torino.” 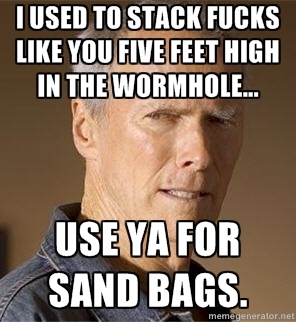 As CB deals with his identity issues, I comb through a backlog of evemails until I get to one from our old friend Moondog, who is announcing his intention to get with all this cool-kid wormhole business.

My timing is good; MD logs in just as I start drafting a reply, and rather than finish the message, I get him on voicecomms and start making arrangements to get him moved. He’s a tidy sort, shipping only the bare essentials with him — a good hauler, a scouting frigate, and the Omen-class cruiser what brung ‘im. Little more is needed, since Gor and I already have Harbinger-class and Prophecy-class battlecruisers sitting in the hangar with his name on them. (Literally.)

The only real concern is getting him safely into the home system, since our current exit to known space lies through a heavily-populated stretch of low security space with more than a few predators circling. I fire up a flare, and pilots from Walrus join me and CB and spread out through lowsec to get eyes in all the connecting systems — perhaps a bit of overkill, but it’s important to me to get our new bunkmate home in one piece. Losing a ship or ships while moving in is a bad way to get things started.

Still, the process takes time, and by the time we land at the tower and get Moondog moved in, he’s ready to be done for the night, so his first taste of wormhole hijinx will have to wait.

Not so for us, as Em has it in his head to start blowing up the NPC-owned customs offices and replacing them with our structures. The outlay for this little project has been fairly significant, so we’re going to pay the bill with a tax of our own on Planetary Interaction (still considerably less than what the NPC offices are charging).

We announce our intentions for the evening, and pilots start reshipping into vessels more appropriate for bashing structures into tiny bits.

The one nice thing: the customs offices aren’t surrounded by a force field sixty kilometers in diameter, the way player-owned towers are. This means that we can sit at point blank range to the customs office and bring high-damage, short range ships that would be useless if we were shooting a tower.

The result is a cluster of ships rarely seen for structure bashes, like the newly buffed-up, small-but-deadly destroyers, and a number of Gallente-made ships boasting short-range, high damage, heavy blasters.

The process isn’t fast, and it can’t be said to be particularly exciting, but it’s nice to have a project to work on with everyone in the system. Eventually the first of the customs offices comes down, and Em begins anchoring the new structure in its place, stamped with our alliance logo. Jobs a good’un.

By the time we’re done, the hour’s running late. We’ve got five more customs office to blow apart, but they don’t all have to go tonight. We make plans for another bash the following evening, and call it for the night.

Notes: Dayjob has returned to more normal levels of activity, contract work is done, other contract work is waiting on the client, and the novel line edits have gone back to the publisher! Happy New Year! Time to get back to some EvE!

Also, it appears that there are people out on the internets who don’t use RSS readers but DO know how to use email. These strange, venn-diagram-defying creatures have contacted me in accordance with the practices of their people, and requested some way of being notified of updates to this blog without the tedium of… you know… going and looking every day. Uncharacteristically, I have obliged them, via the stylish “subscribe via email” button, top-right.

I’ll get the requested fax and telex options implemented just as soon as I can.