Back to the Village

Having re-read some of the stuff related to leaving and then reentering the Depths of a site, I have a feeling I’m going to hold some ill-will to Gertruda for making me escort her back to town, but whatever.

We get back to town an hour before dawn. I’m working my way through a long list of stuff to do. So let’s wrap up a few things, starting with delivery Gertruda to her mother. 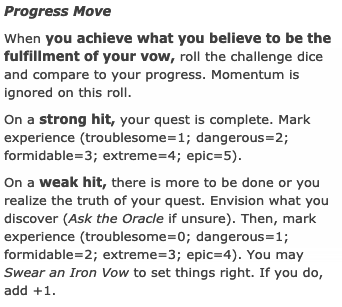 Really? That’s great. Okay. I “realize the truth of the quest.”

I’m going with something like the Dracula movie with Keanu. Gertruda’s been tainted, but not turned – let’s say by some lesser vampire who’s been pretending to be Strahd to the besotted, idiot girl, and toying with her while slowly corrupting her.

So I can’t let that stand, obviously. I’ll take my measly one xp and Swear a Vow to fix the girl by finding who- or whatever was toying with her in the castle.

Nice. I have a clear picture of what I need to do next, and +2 momentum.

I’ll have this be a Formidable quest, since just retrieving the girl was Dangerous, and this feels like it should be a step up from that. In the meantime, the hyperprotective Mary is given instructions to keep a damned close eye on her daughter. (I’m sure nothing will go wrong there.)

Then, quite exhausted, I return to the Chapel of Barovia and make the somewhat riskier attempt to conclude my quest to “Return the Ahmeshti to the hallowed ground of Chapel of the village of Barovia.” (A sort of halfway-point quest for all the stuff that probably needs to happen with that thing.) 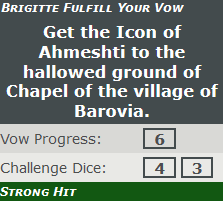 Nice! That’s just a troublesome quest, so 1 more XP there brings me to six total, 3 unspent after getting Ismark as a “kinsman.”

I know what I’d like to do with that XP, so after setting up both the Icon and the holy symbol of Barovia in places of honor, I return to the Icon of Ahmeshti, take out the Flail, get on my knees, and begin a sort of impromptu vigil, for all that I’m quite worn out. I’m trying to forge a bond with this, an ancestral weapon of the Freewardens.

Okay, well, this isn’t actually as annoying as it seems at first – there are three pretty easy responses here:

I’m actually going to go with option 3, here, because I don’t NEED a strong hit – the benefits for that do nothing for me (my spirit and momentum are maxed out right now. 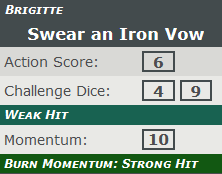 Well, I’m not burning momentum for a Strong hit that only gets me back some of the momentum I just spent, so I start off with a vow sworn, but not EXACTLY sure how to “Drive the Qashida out of Barovia” – since I don’t really know where they are or what they’re doing. (And I’m still getting my head around the idea they EXIST, so…)

Anyway, swearing that vow to the Flail and/or the Farwardens that have come before me let’s me spend 3 xp to pick up a new asset, Blade-bound (in this case, Flail-bound, but whatever). 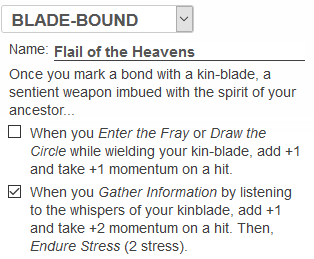 I was really torn about which aspect of the Asset to take first, but while the first one is really useful, the second one is really fun and potentially horrible, so I went with that first. In short, I envision not a spirit but MANY spirits of past farwardens, whispering advice and knowledge from the mace and generally unnerving me and getting in my way.

Obviously, I need to end my vigil/vow-swearing session by trying to get answers from the Flail, specially about the Qashida.

“I’ll drive them out, but how do I find them,” I implore the whispering spirits of the farwardens that seem to surround me and fill the empty spaces of the chapel. 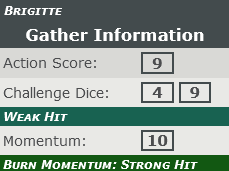 “Few knew of my mission, or my intent,” says the heavy, accented voice of my friend and mentor, Reinhardt. “Someone in the town must have alerted the Robed Brotherhood – they were waiting for me in the Castle.”

So, the new danger is Qashida agents in the village.

I also need to Endure Stress from hearing the ghostly whispers of my dead farwardens. Awesome. 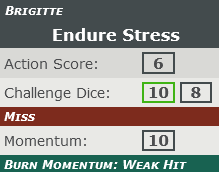 Oh for crying out loud.

Well, the consequences of a miss is -1 momentum, or I can burn EIGHT momentum for a weak hit that does nothing for me. No thanks. I’ll take the miss.

So that’s me coming into the village strong, with pretty much maxed out numbers, but now I’m down Spirit and Supply. I’m tired, I feel surrounded by enemies, and I have to get back to that damned castle. (On the upside, two new assets!)

“I’m taking a nap,” I mumble to Ireena and Ismark. “Don’t let anyone stab me.” Then I but collapse in a pew while the priest, bemused, looks on.