No, I’m not saying that playing DnD is a waste of my time, settle down. Breathe. 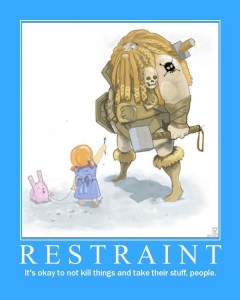 I ran into a pretty interesting thing I wanted to talk briefly about, though.

This week, I have a lot of gaming going on, which is kind of exciting; after months of pretty much nothing in the way of RPG play, I’m playing DnD, running Dragon Age, and then playing Burning Wheel — all in about five days.

Last night we played the DnD game; that gave rise to this post. (Which should have probably been called ‘Wasting my time while playing DnD’, but who’d read that?)

Anyway, to my point.

For the last over-a-year, I’ve been lucky enough to have a pretty regular game going on weeknights. We’ve played quite a few games, most notably (in my mind) Don’t Rest Your Head, Diaspora, Primetime Adventures, and other stuff like that. Games in which, speaking broadly, there are a lot of ‘flags’ attached to your characters — things where you’ve said “this is something that interests me about this guy: I’d like to play around with that in the game, please.”

For instance, in the Diaspora game, Kate’s ‘flags’ (read: Aspects) had to do with being a bit of a lapsed pirate, something of a swashbuckler, a ship’s captain, and having some unfriendly family members looking for her. This was the stuff that was interesting to her, and as the GM I usually felt pretty safe if I planned for something or someone to come along and hit one of those elements of her character.

I could list many more examples, but they’re all pretty obviously along this line, and they all have a few things in common: “hitting” those things in an interesting way is what the players want, so it’s socially rewarding in the game, and most of the time it’s also mechanically rewarding.

Also, if I’m doing something as the GM that doesn’t touch on anyone’s flags in any way… well, the question to ask at that point is “What the hell are you doing, dude? I trust you, but get back on task.”

And that would be fair.

Now, Tim and I have been hammering on his Return to Northmoor campaign for awhile (him for QUITE awhile — I’m Johnny-come-lately), and for the ‘first arc’ of the game I think we’ve done a good job of creating a ‘flag and reward’ system for play that isn’t much of a rules hack.

This short game we’re doing right now isn’t that, though — it’s the mid-arc part of the Northmoor saga, and as such the original ‘secrets’ stuff doesn’t work, exactly. We did some in-character secrets-to-be-revealed, but they didn’t really work in the same way, and they made things a little wonky at the table.

(We’re addressing that by cribbing from Dragon Age and setting up Goals, rather than Secrets-to-be-Revealed, and I think that’ll work better for this arc, but I digress.)

How wonky? Well, when I answered Tim’s ‘secrets questions’ for my character, some of my answers were pointed at Kate’s character. I was all enthusiastic about this ‘what if Beren and Luthien hadn’t hit it off right away’ idea, and went with that — didn’t check with Kate on it (should have), and rattled it all off.

So… guess which were the only “flags” flying for that first session? Guess what every scene seemed to center on?

Which is fine, except those weren’t Kate’s flags for her character. At all. So it wasn’t much fun for her. I think the quote was “it was fine for the first scene, but it’s every scene.”

For her, every scene was wasting time on stuff she wasn’t that interested in.

Second session, everyone else has had time to fill stuff in. I was trying not to play up my flags, because I felt like I’d got enough time on them the first session, so I played extra hard on whatever anyone else provided.

One of those ‘provided things’ was this kid I’d known in the past who was now all grown up. I’d introduced him to the game, Tim brought him in, so I felt obliged to play up whatever he was potentially doing in the story…

… which was trying to propose to Kate’s character. Oops. More time spent on a thing Kate was already tired of.

Then there was a kind of echo chamber thing with the Mysterious Bog Avenger that Tim introduced, who was some kind of vigilante who — inexplicably — dresses up like my character.

Yeah. You see where that went. Or didn’t. I couldn’t drop it, though, cuz the only other thing I had going on was the thing with Kate’s character that I didn’t want to mess with at all.

And I couldn’t play to the flags on the other characters, because we hadn’t done the “Goals” yet — we just had Secrets, and I didn’t KNOW them because… yeah. Duh. SECRETS.

I finally fell back on a half-mentioned obsession with the MacGuffin we’re hunting down, just for something to talk about.

So what do I mean about wasting time?

I’ve gotten in the habit of playing to the flags on the characters at the table, trusting that doing so will (a) please and entertain the player of said character and (b) reward everyone involved in some mechanical way. Playing to those themes is, in fact, part of the game.

Well, no: it’s part of those games — the one’s I’ve been playing. It’s not part of DnD, and even though we’re in the middle of hacking that, we didn’t have the hack up to date last night, so it wasn’t doing what it’s supposed to do — give people indications of what everyone wanted play to be about and reward them for it. Without that, the whole hack is just a cool ‘power up’ chip we get for free each session.

(And in any case the hack will always and only ever be something extraneous to the Original Game — like having a battery mounted DVD player mounted in your car — nice, but easily forgotten and unused, unless you keep giving it power.)

In DnD, if you’re just playing to your own flags (or, as with the Bog Avenger, to no flags at all), it feels like you’re wasting time.

Well, A, you’re not hitting interesting elements of play for anyone (or only for yourself); and B, you aren’t engaging DnD itself by doing the stuff it’s good at doing (combat).

Which means you’re just spinning your cogs, not interacting with any of the machinery — you might as well be chatting about the most recent Dancing with the Stars, because you aren’t playing any part of the game, (even the part you added).

(Yes, you might be roleplaying… but about what? And who cares? Improv is great, but the audience needs to give a shit, y’know?)

I’m not sure where I’m going with this, except to note that it’s given me a lot to think about with regards to what I’ve started thinking of as ‘the Northmoor Hack’.

That, and I’m looking forward to all the games happening this week.