First, a disclaimer: I’m not very good at Fate.

There are players out there who can wave their hand, summon up ever-folding images of the Fate Fractal to illustrate off-the-cuff google+ posts, and write up detailed hacks for the core rules three times a week.

That’s not me. I’m running these supers games using nothing but the rules in the book(s), without any variations.* I basically ignore things like the “Extras” chapter in Fate and FAE, and mentally summarize the whole chapter with “Sometimes you’ll want the game to do something a certain way that is different than anything else in the book, and if so, that should cost something.”

(* – No variations that I’m aware of – it’s possible that stuff from older versions of Fate have crept in, but if so I haven’t noticed and didn’t do it on purpose.)

The reason I bring this up is that, in this section of the game, there were a couple of situations where I wanted specific effects, and set up stuff in a way to make that happen. In hindsight, I can see ways I could have elegantly applied existing rules to accomplish the same thing, but the actual solutions I came up with on the fly aren’t lovely crystalline matrices – they’re rickety Rube Goldberg machines that held together only so long as I kept thinking about them. I don’t recommend replicating some of the stuff here, verbatim.

Unless you think it’s cool. In which case, go ahead.

Now then, where were we?

We we last left our heroes, they’d just recovered most if not all of their memories of abduction by Braniac’s troops, and now knew that if they didn’t get off this ship soon, their friends and families were probably dead (or digitized and deleted, which amounts to the same thing).

Grim and determined, they ask Oracle for a new destination – someplace they can go to stop the digitization of their home neighborhood.

Oracle does a bit of searching – really all she seems to be able to do inside Brainiac’s system right now is find information; her access is too limited for serious hacking – and gives them a new direction to head: a control center located near the center of this section of the ship.

They proceed, and hit their first barrier in the form of an Automated Security Checkpoint in the next Junction Chamber.

Characters need to make Good forceful overcome rolls to act each round (roll at the start of the round). If they don’t, they can’t move (defend, whatever). This is because of the Robotic Brain in the center of the room. The brain’s in an invulnerable forcefield and can’t be harmed.

At the start of the second round, three-unit squads of sentry-bots start showing up (3 stress for each squad, +2 at the stuff they’re good at, -2 to stuff they aren’t good at). They don’t have to make Overcome rolls to act.

If, in any round, all the heroes managed to overcome successfully, the Brain shorts out for a bit, and the forcefield drops for a round. The brain has 4 stress and, if destroyed, stops summoning patrol squads.

Or, you can do it this way:

Brain in a Jar
Aspect: Telekinetic Construct
Forceful: +2
Stunt: Forcefield – Armor:4 versus all physical and most energy attacks. Does not work if Brain has Aspect: Shorted Out. If I am defeated “with style” on an Overcome vs. my Defend, I gain the Aspect: Shorted Out for one round.
Stunt: Summon Bots – Because I am a security construct, once per round I can summon a security bot patrol to the room.

There are probably better ways to do it, but whatever.

Anyway, the trio enter the room. Due to her native telekinetic abilities (and related stunt), Angelia is able to forcefully overcome the telekinetic field immediately. Anna struggles but manages to keep moving by focusing on rescuing her parents (fate point and her new aspect), while Mikenna is basically immobilized.

The doors across the room open, and a trio of security bots march in and open fire. Angelia deals with them while Anna tried to freeze the metal Brain in the middle of the room on a pedestal (to no avail).

Angelia clears two of the three bots, but the remaining soldier gets reinforcements as three more bots rush in through a side entrance. Anna hurls ice at them to help out Angelia, but the girls are clearly struggling. Mikenna still can’t move.

On the third round, the bots are building up, and Anna is struggling to keep moving against the telekinetic force blanketing the room. Mikenna musters everything she’s got and manages to break free of the telekinesis. This added resistance shorts out the Brain for a few seconds and Mikenna takes that opportunity to turn the gold-plated bit of machinery into a non-functional pin-cushion. The telekinetic field drops, and the kids make short work of the remaining bots.

Alarms start sounding, and a stentorian voice starts droning about escaped prisoners needing to be stopped – converge on the control rooms – et cetera.

The kids battle toward the control room, moving fast so that resistance can’t get organized, and storm inside. Oracle has explained that, based on schematics, she thinks there are four ‘connections’ between the ship and a shield generator that, if disabled, will allow her to send reinforcements to them via Boom Tube (whatever that is).

It turns out that the four ‘connections’ are a bit more robust than that: four giant bolts jut from the floor in the large room – all of which need to be destroyed. They’re about this big: 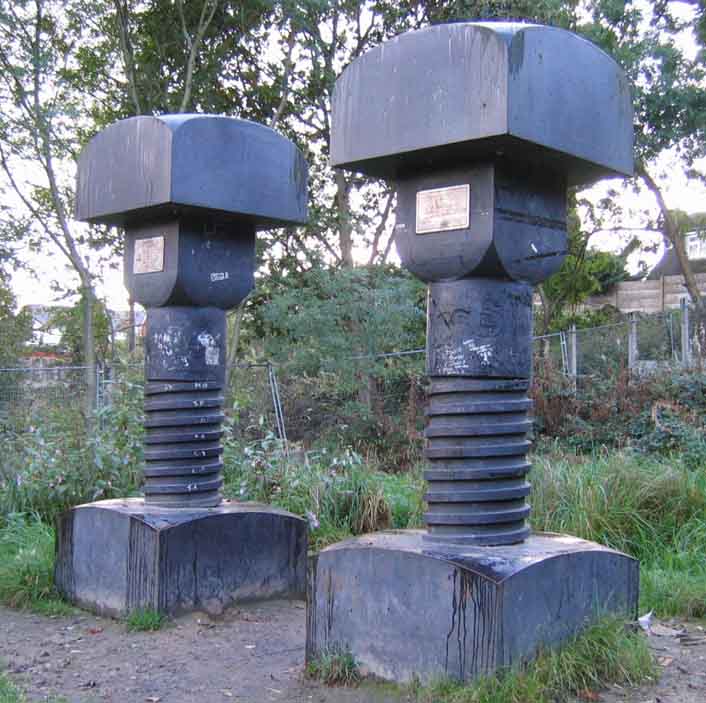 Also, there’s a big combat-grade command bot in the center of the room where Oracle’s schematics say a “control unit” should be: 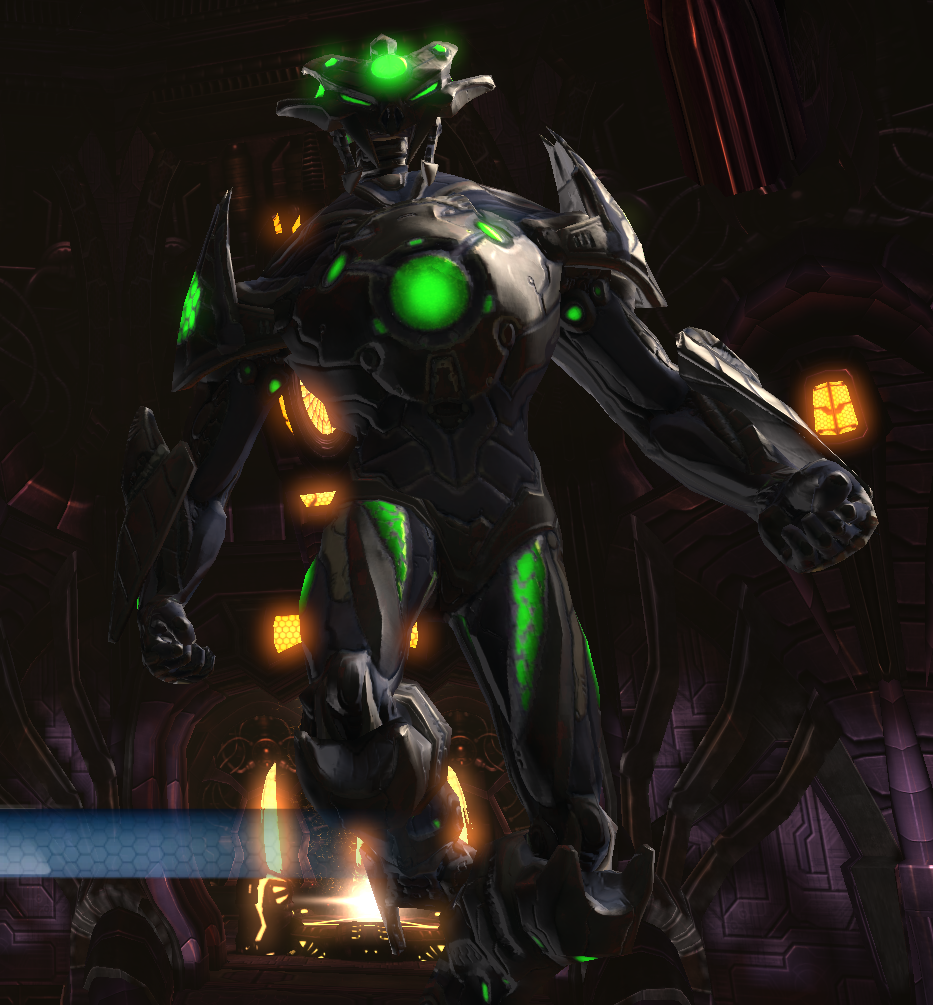 Finally, while they entered from the ‘south’ and jammed the entrance, the other three walls in the room are deep alcoves that basically look like teleporter platforms – looks like a great way for reinforcements to arrive.

At this point, they group tries a number of things, but the situation quickly stabilizes to a number of key facts.

The kids decide the reinforcements need to be dealt with.

Anna puts up an Ice Wall covering the ‘mouth’ of one of the teleporter alcoves. (I just made a … thing … Barrier? that the bots had to destroy to enter the room, with stress equal to Anna’s successes. That’s old-Fate thinking, probably: should have just made it a means for her to active defend against them entering the zone.)

Angelia blocks a second alcove with a force wall.

Mikenna fills her alcove with arrows and mows down the reinforcements there.

Anna ices over the alcove that Angelia had before. Mikenna keeps firing on her alcove, and Angelia tries to unscrew one of the massive bolts with her telekinesis… unsuccessfully. (I decided to do some kind of ‘gradual success’ thing here, and didn’t have time to look up to see if that’s a thing that exists in Fate Core, so I just give decided on a total number of successes she needed to accumulate to totally unscrew the thing.)

Anna ices over the third teleport node. Mikenna takes pot-shots at the Command Unit, but does nothing. Angelia keeps twisting.

Anna and Mikenna team up to freeze and damage another bolt. This kind of works, but… reinforcements are slipping into the room through the shattered ice walls.

Anna reinforces the ice walls while Mikenna cleans up the bots that got through. Angelia gets a bolt loose and starts on another.

Anna, from this point on, is basically playing a game of ice-blaster whackamole with the ice walls, reinforcing whichever ones seem closest to going down. It keeps the others clear to act.

Angelia gets the third bolt free and turns to the fourth-and-final. Mikenna is assisting Anna.

The Command Bot drops his shield and starts powering up a MAJOR blast at Angelia’s back (one round to build up an Advantage first). Mikenna fires a couple shots at it.

Angelia has the bolt loose!

Mikenna defends Angelia from the Command Bot’s blast, taking the hit herself for a Moderate Consequence (burned torso).

Oracle hollers “Shield is down! Reinforcements incoming! (pause) I can get into their servers! *gleeful cackle*”

A boom tube opens, and through it comes Wonder Woman, armed with sword and shield, armored in red and gold. She takes in the room at a glance, nods to the three holding back Brainiac’s troops, and says:

“We must hold this control room until Oracle has done her work.”

She leaps across the room and buries her sword in the chest of the Control Bot, then turns.

“Will you fight with me?”

The rest of the battle is a blur. Mikenna runs out of arrows and resorts to hand to hand. Angelia is smashing swaths through the incoming troops with the shattered halves of the broken bolt. Anna freezes robots solid until there is literally no more moisture left in the air to crystalize.

And still they come. And die, and die.

Wonder Woman tells them they can’t use the Boom Tube to exit the ship (Watchtower security clearance only), but helps them hurriedly clear a teleport pad that Oracle has commandeered.

Its destination? Their home neighborhood – the massive shield unit, tumbling from the ship, destroyed the magnetic jar below the ship, freeing their friends and family.

They arrive in the middle of the street, covered in ice crystals, sweat, blood, grime…

… and drowning in the cheers of those who know them best.

Every one of us, sitting at the table, is grinning from ear to ear.