So the player of this episode’s spotlight character didn’t show up for PTA last night (Khaaaaan!), I suddenly needed to run something off the cuff, and we didn’t get started until 7, due to the waiting to see if the Spotlight guy would show. 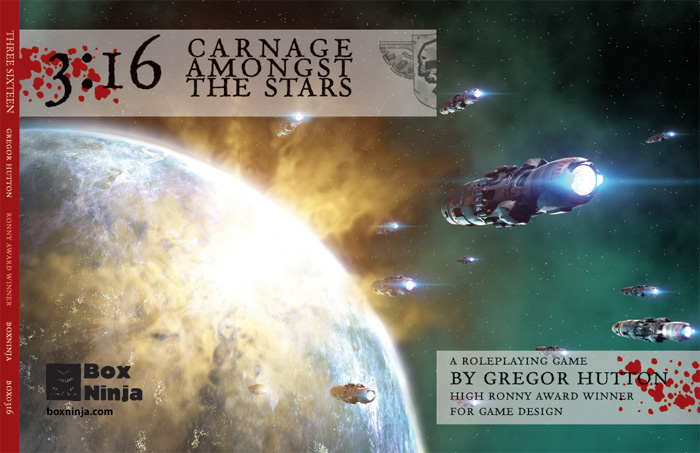 3:16 is (on the surface) about Space Marines blowing the hell out of aliens. It’s Warhammer 40k, Spacehulk, Aliens, Starship Troopers (the movie), and not a small amount of Full Metal Jacket and Platoon all rolled up into a thick, fleshy ball, shot full of stims, and dropped out an airlock.

We went with it.

Their briefing by the prissy Lt. informed them that an asteroid-belt mining facility had gone signal dark. Command was sending in 3rd Army, 16th Battalion to reestablish comms and make sure nothing had gone amiss.

The troops were warned that Aliens were active in the area: reptilian humanoids with a POWERFUL MIMICRY ABILITY. They were to be DESTROYED WITH EXTREME PREJUDICE.

Note: the actual “alien threat” that I rolled up was Corrupt Troopers with the Armor ability.

So the troopers get in the drop ship and head on down to the mining base. In flight, while the Lt. droned on, the ship is hit with… something and starts to heel over and tumble.

Cpl. Boll immediately pops the back deployment hatch and orders everyone to EVAC NOW!

Weevil and Boll succeed, Trib does not.

What followed was a firefight in the hangar bay with well-armed opponents who had taken out the transport with guided missiles.

Afterwards, the troopers noticed the dead ‘reptiloids’ looked just like dead troopers. In power armor identical to their own. With the same weapons.

The proceed into the mining facility tunnels, getting harassed by one of the “enemy” (voiced by Clancy Brown), who taunted them with their ignorance of what Command was really up to out here, and how they didn’t know what they were really being used for, and how the troopers should be joining forces, not fighting.

The Lt. ordered radios shut down.

They came to the mining base/town in the heart of the asteroid. At the center of the company-built town, they found a mass grave and a crudely built monument. The “Enemy Voice” came over the town’s loudspeakers.

“You see what happened here? We were told the miners had been taken over by mind-controlling alien leeches — that we had to destroy them for their own good, and the good of Terra.”

“That wasn’t what happen. What happened was these families wanted better pay. That’s it. We got sent in to gun them down.”

Having used a Strength, Boll is now eligible for promotion at the end of the mission… and he’s 1/10th of the way to acquiring his final Strength/Weakness: “Hatred of Terra”.

From that, I think you can guess at one possible arc in this game.

They marines chase down the enemy as they retreat to their own ship, and there’s a final showdown versus the Enemy Voice marine right at the gangplank of the ship, before it flies off.

Once again, he tries to get the troopers to come with him – to see the truth – and to DO something about it.

Then Sergeant Happypants shot him in the face (and considered fragging Cpl. Boll into the bargain).

Back on the TCST Dortmunder, Cpl. Boll is promoted to Sergeant (again), and the unit requests (and gets) a number of weapon-grade improvements (though Weevil’s request for a tactical shotgun was denied). Weevil’s NFA went up to 4, Boll’s FA went to 8.

We were done playing in a little over 2 hours.

Good stuff. I didn’t have the rules down too well – hadn’t read them in maybe six months – but we muddled through and I only forgot one important thing (NFA rolls out of combat give you a bonus in later rolls).

And honestly? I’d kinda like to play this again and see what happens with these guys. All told, what more do you want out of a quick and dirty night of gaming?

Finally, as promised to the group, a series of links to hacks, tweaks, discussions, and actual play. I marked the particularly good stuff.

Talking about the game: