It’s an early Saturday morning, and the cupboard (by which I mean “our home system”) is bare. The random number generator hasn’t been particularly kind the last few days, and there’s nothing interesting to shoot as far as the eye and my on-board scanner can see.

However, my scanner can’t reach into our neighboring system, so I’ll head over for a bit of a shufti. The local class one system is empty and boring, but we have an inbound connection from a class two system like our own, and that looks a bit more promising.

My first directional and on-board scan is a bit odd. I don’t see any towers or ships, and there are a fair number of Sleeper anomalies showing up on my overview, but not the several dozen or so that you tend to see in an overgrown, uninhabited system. So: someone has been active here, but not in the last few days. Interesting.

I jet around the system in my Cheetah cov-ops frigate and after a bit more searching I’m able to find the local residents’ tower, anchored at one of the twenty or so moons orbiting a gas giant. No ships, piloted or otherwise, float in the tower shields, though at least some of that can be explained by the time of day — the corporation is German, and I happen to be quite familiar with the play schedule of pilots from that part of the world; they generally wouldn’t be on right now. Also, a quick check of Wormnav and a few other info sites shows a very distinctive pattern — every five to seven days, there’s a huge spike in Sleeper ship kills with deep valleys of almost no activity in between. This would seem to indicate that we are GO for sleeper killing, except for the somewhat troublesome fact that the last Sleeper-killing binge was about six days ago, which means I’m poking around the home of some weekend star-warriors who might wake up to find me eating their porridge.

This doesn’t prove to be much of a deterrent.

I wake up Bre, and she and Ty strap into pointy ships for a bit of internet spaceship mayhem. Once back in the neighboring system, I review the anomalies available and notice that there is a very nice group of high-profit sites in a convenient cluster that’s within the 14 AU directional scanning range of the local tower. Perfect: I can shoot sleepers with the most lunch money in their pockets and still watch the tower for any change in activity.

The combat proves to be fairly easy — maybe the sleepers don’t like the hour of the day either — but in any case I have to deal with very little target-switching nonsense taking out my poor helpless combat drones. We’re able to mop up a half-dozen sites in less than an hour and bookmark the location of the wrecks left behind so I can come back afterwards with a salvaging ship.

The timing of this is important — given an hour to decant, the elements of the sleeper site that make it incredibly easy to locate with a simple onboard ship scanner will have vanished (postmortem decay?), but the wrecks with all their lovely candy innards will still be floating in open space — this means that it will be that much more difficult for anyone to find me while I’m poking around with a fragile salvaging ship.

Which is exactly what Ty does. Bre jumps into a Buzzard covert-ops ship simply because she’s more comfortable in that than her drake, and I’m off to my bookmarked wreckage in a Catalyst-class destroyer with tractor beams and salvaging modules bolted on in place of railguns.

Two sites go down in quick succession and I’m on to the third when Tira pokes her head in to see how it’s going.

“Just shooting sleepers and taking their stuff in the system next door.”

I can hear her roll her eyes. “Do unto others and then shoot them when they try to do unto you?”

“I guess.” I continue to suck wrecks into the hold of the Catalyst. “But the thing is this: I might like it if folks didn’t wildcat our system, and if not doing it to other people meant that other people couldn’t do it to us? That would be great.”

“Definitely. So if I’m going to get done-to…”

I nod, and check d-scan again.

I spy with my little eye… Germans, logging on for a little bit of evening Sleeper shooting.

The first couple ships that show up are haulers and other non-combat types, but that doesn’t last for long. I can only imagine the bustle of activity as their first d-scan shows them dozens of sleeper wrecks and a salvaging ship.

Industrial haulers and mining ships are swapped for battleships, which don’t actually worry me since they won’t be able to determine my location. New pilots keep connecting, however, and one of them switches to a scanning ship, which is somewhat more worrisome. A few seconds later, my d-scan is showing scanning probes in the system, and I know that my time is running out.

A smart man would have already left.

A more reckless but still smart man would have left as soon as the scanning ship showed up.

Me? I keep salvaging.

Why? It looks like they aren’t going to be able to find me directly, because the scanning probes in the system are those designed for finding wormholes and other anomalies, not the combat scanning probes used to locate ships. This isn’t that unusual — the combat scanning probes are bloody huge, and require an expanded probe launcher that is an absolute pain in the neck to fit on most ships. These guys don’t seem to have them, which means that they’ll have to find our wormhole connection and wait for me there.

I figure I’ve got a least a few minutes before —

That’s about when Bre tells me that she’s watching the home-side of our wormhole, and a battleship just jumped through and went into close orbit.

Well, at this point, I can launch my own probes and scan for the other exit out of the system (just as likely, if not moreso, to be covered), or I can make a run for our wormhole and hope for the best.

Or, I could keep salvaging wrecks.

I decide to keep salvaging wrecks.

I’ve just got to the final anomaly, and I set about collecting the most valuable stuff while I consider the situation.

I have a riled group of pilots who seem to think I have shot their Sleepers and am currently packing all the loot into a giant red bag, like a spacesuit-clad Grinch. No idea where they would get that impression.

Said pilots are parked on both the home side and, let me check… yes, also THIS side of the wormhole leading home. Said ships include a couple of battleships and — far more worrisome — a small stealth bomber on the this side of the connection; a ship that’s actually small enough to get a lock and jam my engines before I can warp away.

I can imagine them right now: sitting on the wormhole, weapons hot, pounding the d-scan for everything they’ve got, watching the list of sleeper wrecks on the overview dwindle, one by one.

Which of course gives me an idea.

Since they are very likely watching d-scan for their cue as to when to expect me, I grab only the wrecks most likely to have valuable resources and, with a lot of loot still on the field of battle (and still filling up d-scan), I warp to the wormhole.

I think it’s fair to say that I catch them with their lederhosen down.

The Manticore-class stealth bomber not only doesn’t try to lock me, but is actually a few thousand meters too far away from the wormhole to follow me when I drop out of warp and slide into the wobbling distortion that will take me home. A Dominix-class battleship follows, but it’s far from likely he’ll be able to lock me before I’m gone.

I don’t wait for my session change timer to elapse on the other side before I move — in some cases, it’s smarter to do that, because it gives me the chance to use the wormhole to escape back the way I came, but in a ship like the one I’m in, I couldn’t take the pounding such a move would require — if I can’t warp away, I’m as good as dead, and successfully warping away comes down to the simple question “did I surprise the bomber pilot enough?”

I initiate warp, and the destroyer slowly wheels in the direction of our tower. The battleships (two) start to lock me, but my eyes are on the wormhole, which shudders as the Manticore slips through. I can see the ship fade into view, can imagine the pilot getting his bearings, find me on the overview, and start his target lock. He will need only seconds.

He doesn’t get them. I’m gone.

Safe in the tower, I tally up the loot while Bre watches the activity around the hole. 75 million isk and a healthy shot of adrenaline to start off the day — not bad for ninety minutes of work.

Tim and Kim are waiting, and it’s time for us to head out for the day, so I sign out and shoot a quick message over to my other corpmates.

Exercise caution in the system today. It’s possible I riled up our neighbors.

About a half-hour later, my phone rings. It’s CB. The conversation that followed was weirdly familiar. 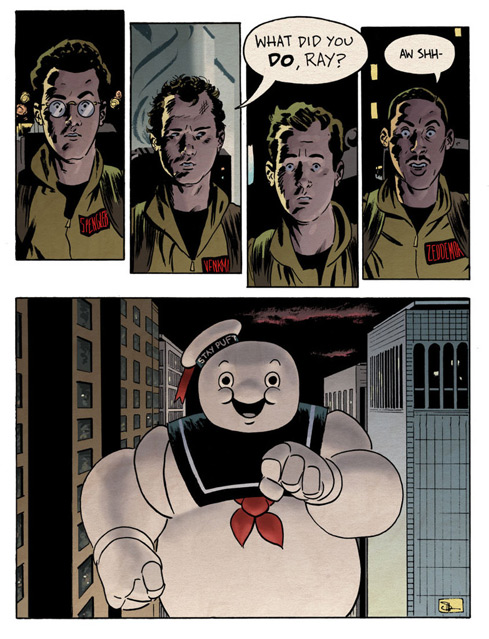