S. John Ross (creator of Risus) mentioned a plan to run some one-shot game sessions online. I, like many others, voiced interest in this and (through a combination of luck and getting woken up before 6am by my kids) managed to snag a spot in the first game he decided to run: a one shot supers game this Friday.

Pre-generated characters were available, and while I was fine with that idea, I also pitched a short concept for a character a few people may be familiar with from back in my City of Heroes/DCUO days.

John liked my proposal, and we bounced feedback back and forth until we had nailed down a version we were both happy with. I’m putting it up here both to document the results and because I think it’s neat and interesting how the same basic character concept takes on different nuances when it’s expressed in different game systems.

The bullet lists beneath each cliche for this character are essentially the tools of the trade that come along with each cliche (defining those tools was a lot of the back and forth that John and I focused on). By default, tools of the trade are literal things you might possess, but as you can see, they can also cover demeanor, talents, areas of expertise, and ‘color’ for the character in question.

I’m looking forward to the game.

Lukacs Tolbathy, bastard child of a conniving war-witch and one of the Earth Princes of Utumno. (One of. His mother might know exactly which one, but she’s not saying, and rumors of her misspent youth indicate no less than fifteen likely candidates and twice the number “possibles.”).

With nothing in common with his mother and no connection to Utumno, Lukacs set out into the everworlds to find a life of his own. The alien invasion [or whatever Big Meta Thing is going on in the setting] lured him to Earth — providing him both a place where his native abilities were of use (in the role of a ‘superhero’), and where he stands some small chance of finding… What?

Half-trained witch’s apprentice: (2)
– basic cantrips and few ‘oh crap’ spells.
– might be able to cobble together a ritual, maybe. Given a lot of time and books he doesn’t possess.
– generalist knowledge of the comic book “supernatural” (as opposed to tech or mutant/metahuman stuff) 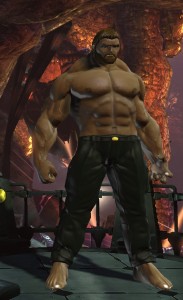