Last night, I swapped out normal bedtime activities for a little RPG fun with Sean and Kaylee. I’ve done this in the past, and I’ve even done stuff with Kaylee and Sean before, but it’s been quite a while since we’ve been able to find time (blame moving, swim practice damn near every night, too much homework, and a two year old who’s neither ready to play, go to bed, or leave the big kids alone).

I didn’t have much time, but I’d kind of promised a game of some kind to Sean, Kaylee allegedly had her homework done, and dammit I wanted to do something.

That something, somewhat unexpectedly, turned out to be Mouse Guard.

Last week, Kaylee was poking around my gaming shelves. She pulled out a copy of the Mouse Guard RPG, asked what it was, and basically lost her mind when I told her it was a roleplaying game based on Mouse Guard. This reaction was unexpected; we’d been pitching game ideas for the last couple months and hadn’t really hit on anything that totally thrilled both of us, and I knew she and Sean both liked the comics, but Mouse Guard simply hadn’t occured to me.

So: setting and story solved — all I needed was a system.

Now, I’ve run the official version of the game in the past, and it’s fine – parts of it are brilliant – but it’s not something I’m going to play, these days. I wanted something lighter, something five year old friendly, and aside from all that something I personally wanted to run.

I got pretty excited when I found Mouse World – the author mentions the documents aren’t quite done, and he’s totally right; but while they may need an editing and reorganization pass, they are absolutely playable, and Kaylee and I took a few minutes this weekend to make up a guard mouse scout named Laurel. I love the PtbA mechanics, and I already know Sean can handle adding a couple d6s and a stat. The fact the MW hack uses checkbox conditions rather than hitpoints is another pro-kid vote in favor.

I’m looking forward to running the game at some point, but that didn’t end up being what I ran last night.

When push came to shove and I was moments away from the forty minute window we had to play, I decided on Risus, with a few optional rules added.

Risus has been around quite awhile, with a very dedicated fan base, and has a deserved reputation for being light and easy. It also has a rep for being a silly, comedy RPG (partly due to the author’s undeniable humor in presentation), and while it can certainly do comedy, I’m quite sure it could do lots of other stuff as well. I’d already been thinking about it for Star Wars, and had refreshed myself on some of my favorite optional rules, so I grabbed three six-packs of d6s for me, Kaylee, and Sean, some index cards, pencils, and headed downstairs.

Risus characters are pretty straightforward. You get ten dice to allocate to character-defining cliches (and a few other things), and when you want to do something, you pick the cliche you want to use, roll as many dice as the cliche has for its rating and, in the basic rules, add them up and see if the total is high enough. Here’s what we came up with: 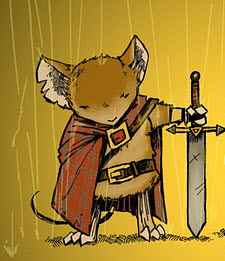 Any Risus-heads will recognize the optional rules we’re using so far: Sidekicks (trade in one die for a three-dice rated companion who can help you out sometimes), and Lucky Shots (trade in one dice for a pool of three renewable dice that can be added to any roll (one per roll) as a boost).

The only other optional rule I decided to use that’s pretty close to the rules for Simpler Risus. (I don’t know if that name is accurate, to be honest, but it’s something I wanted to try out.) Basically, instead of rolling your dice and adding them together, you count the dice that come up >3 as Successes. There were two main reasons for this:

Also, at his reading level, a *World character sheet isn’t going to fly. I needed something he could read.

(I may do something like Mouse World conditions, rather than the Risus diminishing dice pools, but it didn’t come up in play this time, so who knows?)

Why didn’t you just run Hero Kids, with mice, like you’ve talked about doing before?

I couldn’t find the books. 🙁

I think they’re still in book boxes until our basement is finished. (Just a few more weeks!)

Blah blah blah, rules-nerd: What happened in the GAME?

Right. Time to play. We now have 30 minutes.

The spring thaw has come, and with it, Gwendolyn’s first missions of the season. Laurel and Conner are dispatched to Elmoss with a satchel of mail. (Normally, she’d send at least three guard mice, but as Laurel is an experienced scout and grew up in Elmoss, it’s just two of them.)

I started off by asking Laurel to check the weather and plan their route. I told her she’d need a lot of successes to do a perfect job (4), because success-at-cost at that point in a mission is fun, but she shut me down with a perfect roll of four successes on four dice. Nevermind, then.

Basic route charted, I let the kids decide who was going to be the trailblazer (finding the best route forward, on the ground), and who would be the lookout. Laurel was the trailblazer, since she’s a scout, and we figured Conner was good for roaming lookout, since he’s sneaker. In this, both kids rolled, and came up with a few successes each. Laurel guided them along well enough, and things are going smoothly until they hit a wide, fast-moving stream that isn’t supposed to be there – spring runoff has cuz them off and left Laurel scratching her head on a muddy riverbank.

Meanwhile, Conner catches the sound of some birds approaching. He can’t find them in the overgrowth, but sneaks back to Laurel without alerting them. The mice hear them coming, and not knowing what kind of birds they might be, take cover.

Turns out it’s a couple ruffled looking robins, who drop in next to the stream, drink a bit of water, and start pecking around, looking for worms in the muddy bank.

Laurel decides this might be just the help they need to get past the stream and steps out to hail the birds in their own language.

Unfortunately, it’s been quite awhile since she’s spoken Robin, and she’s rusty. Adding to that, the robins are grumpy, rattled (they were just chased by a falcon!), and hungry. When Laurel asks if she can trouble them for a lift over the stream, they say they’ll do it for food: about about those two big bugs the mice have with them?

“Well don’t be greedy, little mouse… you can’t eat both of them yourself…”

Laurel calms down and suggests the two guard mice can help the robins find more appropriate food and, once the birds have their fill, they can carry the guards over the stream.

What this means is the mice do a lot of digging and mucking around in the muddy river bank, hauling out nightcrawlers for the ravenous robins. By the time they’re done, they are muddy, grumpy, and tired, but the robins are happy and carry them over the rushing water with no more problems.

The mice continue to Elmoss, are hailed and recognized by the local militia, and enter the town. Laurel knows the way to the post office, but (very low roll) once they get there, they find only a weepy assistant, and no master postmouse.

Apparently, just the night before, something terrible happened at the postmaster’s home; the whole place has been wrecked, with doors and windows broken and off their hinges, and no one seems to know what to do.

Can the guard mice help?

Tune in next time to find out!

All in all, a fun little session, and this morning, Sean said the nicest thing I’d ever want to hear about one of our games:

“Can we play it again tonight?”