We’re back! It’s another long flight, so let’s run through Masks sessions to the latest and see what to make of them…

I like when we can start things in media res, if only to skip the fiddly front-loading on a session. 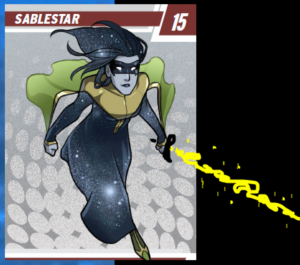 In this one, I skipped away from the school, working off the assumption Leo and Adam would want to get the action as far away from the school as they could. The players agreed, though in hindsight I probably didn’t need to play it so coy with the framing and just tell them what I was thinking. Lesson learned, though unfortunately not until now, and not when I needed it in session 13. More on that in a few.

At any rate, this fight went off quite well, I thought. The team has only had a few fights up to this point, and I was starting to think I’d need to bring in at least a 1-for-1 matchup to really test them, since they pretty much wiped out everyone up to this point.

Sablestar provided an additional and very different data point, proving a real problem for the heroes without me needing to bring in any further bad guys. Part of that was simply using mixed successes to complicate the scene with additional ‘stuff’ – when the heroes can take out a villain with 3 or maybe 4 solid hits, giving them something to do besides punching is much more interesting. This was definitely the most dynamic and interesting combat scene we’d had up to this point, and started to add some great backstory to Adam/Concord.

As things wrapped up, the last big move saw me handing out a pile of ‘take a powerful blow’ moves. I hemmed and hawed about this during the game – it felt right, and normally that’s enough, but for some reason I’m way way way more tentative with GM moves and even narration in this game. I have no idea why, and honestly I don’t think that extra care has benefited anyone very much, so I think I need to trust my instincts a bit more.

Weirdly, this is born out by a fairly egregious overstep I made a few sessions later. More on that in a bit.

(Hell-day part… four? seriously? – or part 4 and part 0, maybe, due to a flashback? It’s complicated)

This session was a bit weird, and weirdly short. 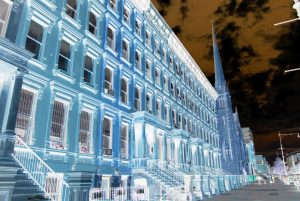 We started off with a flashback to cover what Ghost Girl had been up to during her Condition-clearing reckless investigation (a scene I should have had in the previous session and never got to). This ended up taking a long while, and didn’t involve anyone else, so that’s just poor use of time on my part, despite the fact I was happy with the stuff we got into and found out. Good narration, bad group-involvement. No GM cookie for that one.

The only other thing we got to was the big reveal that the robot that assembled itself in Link’s home base and came after him at school was actually a back-up of Pneuma that had activated after some kind of “Emergency: Go To 10″ protocol was activated when something bad happened to her.” There was some drama (and comfort/support moves) around this that I liked.

Buuuut, there is a problem I didn’t recognize until it was too late – putting Pneuma in danger is basically a board-clearing, table-flipping deal for Link, which presents problems when we already have a couple-three major plot chainsaws in the air. Bill gave me some good tips on ways to make that sort of thing a bit more of a timed slow burn, and I’ve tucked those away for later, but lesson learned.

Day of Hell, part the Fifth

So I screwed up.

The obvious thing I screwed up is that I started in media res and framed the heroes into the middle of a major assault on… the secret basements and sub basements beneath the evacuated Halcyon International Airport, and I did so without checking with anyone first.

Which, when I sum it up like that, is so blindingly obvious a fuck-up it seems impossible I didn’t see it coming.

Now, that sort of framing is fine if you’ve taken the measure of the team and know that’s where things are going and just decide to skip to the higher action parts of things.

The thing is, it wasn’t DOING those things that was the actual screw-up.

The mistake I made was in getting talked into a hard-framed in media res thing in the first place, because I hadn’t prepped for it or really thought about it much, so I was ad-libbing the whole thing without communicating first, during, or after. (My only defense is that I was tired and punchy going into the night, but that’s pretty weak tea.) If I’m going to do something like that it needs prep, and communication. That was the real mistake.

This reinforces, in a weird way, the ‘need to trust my instincts more’ note I made a few sessions back, because my instincts were to not do this, and I didn’t listen.

So that’s both ways not trusting myself (not doing and doing) messing with me, inside two or three sessions. Bleh.

On the Bright Side

It was a deprotagonizing set-up, but everyone agreed the assumptions made were fair, if extrapolated without anyone’s input (damn it just seems to stupid and OBVIOUS every time I think about it). “If we’d played through the whole lead-in,” went the response, “it wouldn’t have looked exactly the same, but it would have been darn close, so it’s okay.”

Put another way, I’m annoyed with what I did, but I think the results in the fiction were good and added a lot of great stuff to the campaign – the introduction of Rosa Rook gets associated in everyone’s mind with the situation being out of their control and with high-handed manipulation by adults, and I guess that’s a plus, there; she’s a great addition I think the whole game really needed.

So… I really wish we’d gotten there differently, but I was glad for the final destination? I dunno.

The very best suggestion in post-session discussion was that getting everyone on the same page with the start of the session could have been handled beautifully with love letters, like that ones I used in Session One and which, in one player’s words “I’ve hoped we’d use more.” Great, great idea.

AEGIS swept in for a PR coverup (“those young heroes were at the airport to stop a power-suited terrorist!”), which leads us into the next session, where I’d take the love letter feedback to heart.

I started off the session (and, really, pretty much filled up the session) playing off of love letters I’d written for each character.

I distributed them days earlier, giving everyone time to process and consider their choices, which gave everyone a lot more buy-in. I was also open to feedback and modification of the letters, but all the feedback was positive, so nothing to do there.

As I said, playing through all this stuff pretty much filled up the whole session, and saw the realization of the 6- rolls from the past three or four sessions that I’d had on my to-do list for awhile. 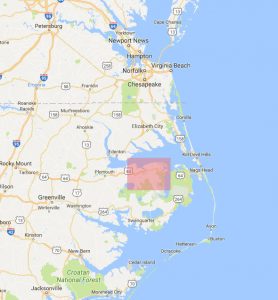 Jason started … let’s call it ‘hallucinating’ a 10-year-old version of Alycia Chin, bringing the total number of holographic AI relationships on his dance card to something like 4 or 5. I’m pretty happy with that result, and I think Dave was as well, as he had mentioned during the week wishing he could get all the success AND failure results from the love letter.

Concord’s … ‘shard’ finally woke up, which is going to give him something else to contend with – a ‘voice’ for the superhero side of his Superhero/Mundane existence, which we’ve both been looking forward to. The final scene with him and his family was awesome and brutal.

I was happy to see Link protecting his people to the press – I think that was really nice to see after a couple sessions of having them at risk. Also helped us highlight his friend Otto’s accessibility issues.

I was VERY happy to have Harry in a position where we could see him being more of an expert in the public side of being a superhero. It went well, and rolled into some good stuff in the following session as well. I really liked him in that space, and alienating him from his family a bit, which we haven’t seen yet, but will.

Everything else was revealing information (background about Ghost Girl) and laying the groundwork for same (Pneuma has a weird memory error in her backup, and AEGIS has a video of the moments surrounding Jason’s Dad’s … death? which Agent Waters slipped to Quill).

All in all, very happy with this session, and the use of the love letters. I’m thinking about using a “lite” version of this for the coming session to get things sorted out a bit more.

Issue 15: In the Clutches of Late-Night Melodrama!

Thank god this Hellday is ov- WHAT DO YOU MEAN PART 7?!?

Link moves in with the Gales, a twist I did NOT see coming. Need to think more about that, because there’s some completely unexplored territory there. Yet more good stuff with Harry, which I really liked. 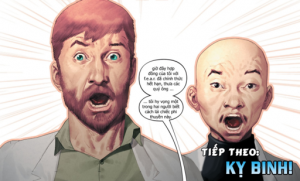 Jason gets some information about his dad, working with Achilles Chin, working against someone… else? Who? What? Jason’s response says he’s expecting this to really blow up in his face in short order, in a big way. I’ve got some more stuff to lay out here.

Concord’s parents tell him they want him to stop working for the Concordance. Maybe. They want to talk about it. I think Mike and I are both excited about where that’s going.

And… a couple rolls go sideways and Ghost Girl starts out investigating her family’s ties to mystic secret societies and… ends up in the Sepiaverse.

So that’s gonna be a thing.