Okay, it looks like time for our first actual fight in the system, so I figured I ought to take the time to make sure I get it right – there are a few more moving pieces with combat than some other situations, because RPG. Anyway. 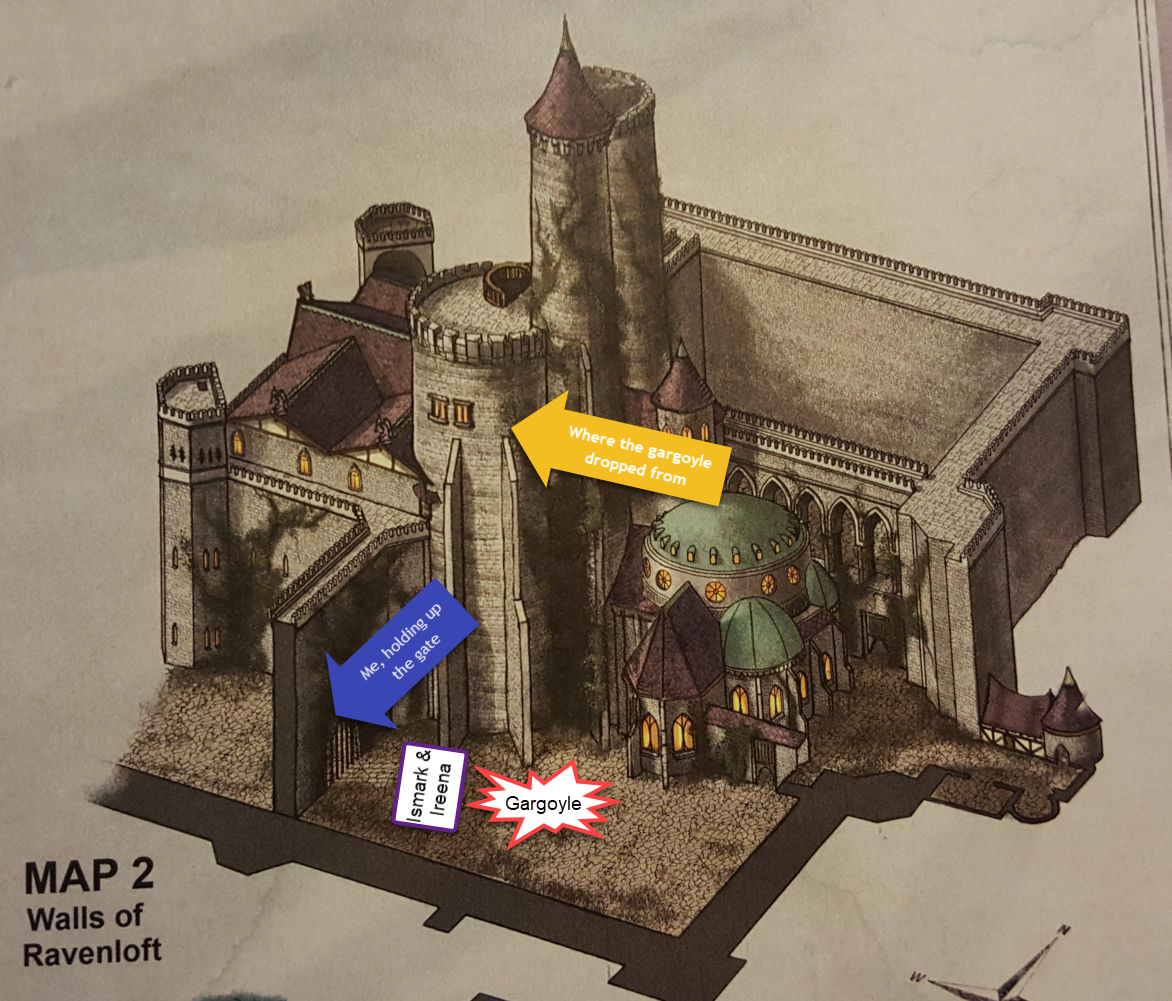 Brig has pushed up the rusty portcullis separating the southern forecourt from hind court, and Ismark and Ireena scrambled through. I was left to figure out how to get let the gate down and get out from under the thing without making a godawful racket and alert the whole castle.

While this is happening, a gargoyle dropped down from the buttresses above (see picture) and into the courtyard just behind the Koyanas, and Brig’s choices got a lot simpler.

Brigitte charges, and the first thing I’m wondering is whether that gate comes crashing down right away. It could make it a move, but honestly there’s not a lot of skill being applied here – it’s just dumb luck, and I’d guess there’s about a 50/50 chance that the rusted track lets the portcullis slam back down.

Well, okay then. The gate is a little shimmied in the track, and when Brig lunges free, it slips a couple inches, gets hung up and cockeyed, and sticks. Lucky us, so far.

Brigitte charges at and past her new friends, both of them wide-eyed and a little surprised – years of training making the unlimbering of shield and mace an automatic thing. 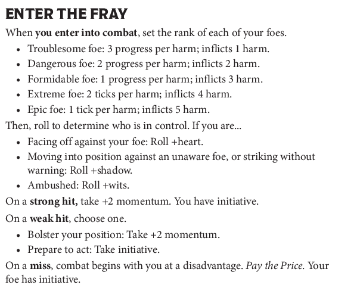 I don’t need the gargoyle to be some terrible foe – I suspect they may be pretty common, at least around the outer grounds of the castle – but they’re more than a basic farmer with an angry pitchfork, so let’s make this thing a Dangerous opponent. (Inflicts 2 harm, takes 2 progress per harm.)

Then, roll to determine who’s in control. Ooh, I get to roll +heart. Nice. (Burning 10 momentum on a basic roll reminded me I didn’t envision Brigitte being very stealthy, and that I didn’t give her the stats to pull it off.)

Very cool. I have initiative (which doesn’t mean what it means in DnD), and +2 to my momentum track, which moves things in a happier direction.

With initiative, I can go for a Strike (which acknowledges I have the edge here) instead of Clash (which is a riskier kind of melee exchange).

Brigitte’s charge isn’t a means of closing the distance – it is the attack, in a very real sense, and her momentum only builds as she charges across the courtyard, each step coming faster than the last. She smashes straight into the gargoyle, leading with her heavy, reinforced shield – the mace blow she follows up with is almost an afterthought. 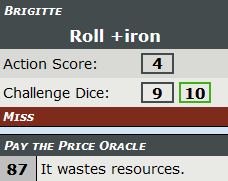 It’s… super neat when I write up a really cool opening attack and the dice just SCREW me. Ahh well.

The gargoyle is ready for Brig’s attack, and it catches the shield with both it’s clawed hands, absorbing the impact even as it’s pushed back a few steps. It takes the mace strike on a shoulder, like a teenager shrugging off a younger siblings attack in a pillow fight, and then reaches over the shield with a stony claw. Brig likewise turns a shoulder to protect from the claw, and the thing gets the strap of her pack, pulling, then tearing it. Triple-stitched, reinforced leather tears like wet paper, and half the contents of Brig’s pack spray across the courtyard, first at the thing tears at it, then as Brigitte pulls back and tosses it aside.

[-2 supply, based on the Oracle’s result. Super. Also, the thing has initiative now, which means I’m Clashing.]

Brigitte shucks the pack away and wades back in, stalking now, rather than charging.

Gaaaad dammit. I cannot get a break. Okay. Keeping it a bit more simple this time, I’m going for the obvious Pay the Price of Enduring Harm. The thing’s claws are just tearing through my gear like it’s nothing. I’m taking 2 harm (since this is a Dangerous foe) and Enduring Harm:

I don’t know how to feel about being more lucky when it comes time to take a beating than give one, but whatever; I’ll take it. The 8 comes from a +1 I get from my Ironclad asset, which also gives me a +1 momentum on a hit, which I’ll happily take.

The strong hit on Endure Harm means I can choose either to exchange a momentum for +1 health, OR take another +1 momentum. In the long term, I’ll probably want the health – it’s harder to recover than momentum, but that +5 momentum might help me turn the tide RIGHT NOW.

Also, I should give through to that Match. That gives me an opportunity, and it want it to be a real one this time (I’ve been bad about making my positive matches kind of weak, sometimes.

SO: okay. I’m going to take the ‘heal’ option, I think, but I think that Match gives Brig initiative back.

Brig would have sworn she was wearing armor, but you’d never know it from the way this thing is tearing at her. If it weren’t for her shield – for the years of training against her mentor (also bigger and stronger than her), she’s be cooling meat on the cobblestones already. Even so, she’s reeling, stumbling back.

And then and arrow skips off the things head. Then another, snapping and striking sparks. Ismark is stringing a third arrow, and his sister is at his side, sword out and ready for the things charge.

The gargoyle turns, lowers its head, growls (somehow? It doesn’t have a throat!), and takes two steps… before Brigitte crashes into it from the side.

[You know, I’ve pondered on several occasions whether I should move Brig to the “challenging” stat array, but the fact of the matter is, I’ve yet to miss a roll by anything close enough that one more point would matter. This is no exception.]

Okay, so I need to pay the price, but I don’t want to just ‘hit point’ them back and forth, so let’s keep it interesting and see what the Oracle says.

Same situation as last time, but without the twist. I’m not going to pick anything else, either – I don’t relish trying to get my health back up in an enemy castle, so I want to mitigate as much of that as I can. This means my heath is +3, and my Momentum stays stead at 3, thanks to getting one from my Ironclad and then trading it right away, twice.

The charge was exactly as effective as the last one.

“Get behind me!” I shout at Ismark and Ireena; my shield is up and I’m circling the thing, trying to maneuver it somewhere useful. Further back into the courtyard? No. Wait, WE can go further in. Yes. Maybe. Find another gate. Something we can get between us and this thing. “Try to get past and see what’s ahead!” 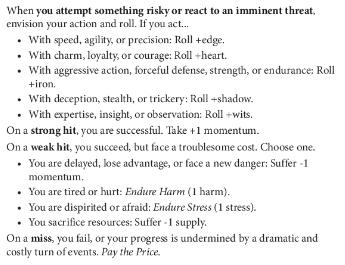 I’m going to Face Danger, using my shield as cover, which gives me a +1. I’ll take whatever break I can, frankly.

Ooh, and that +1 is just what I needed for the Strong Hit. I could kiss my shield right now. 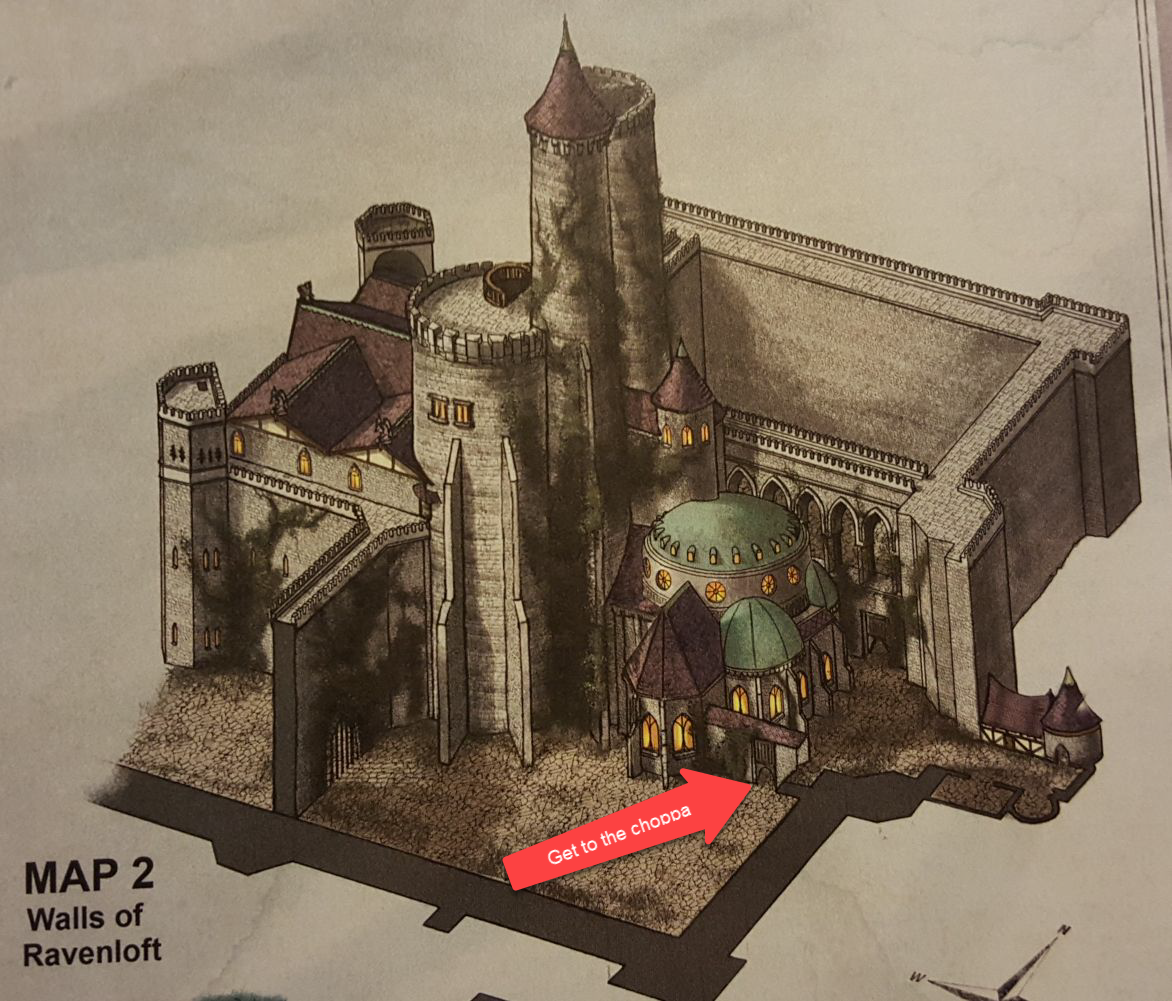 I’m going to try to Secure Advantage while Ismark and Ireena slip past me and I keep this stony bastard busy.

“The good news is, the gate’s up!” calls out Ismark. “The bad news is, it’s probably rusted in place.”

Eh. Fine. No worse than a strong Face Danger – +1 momentum is a net good, undeniably.

“Fine.” I grit my teeth and plant myself in front of the opening, and ready myself for the thing’s next attack, wishing I had heavier armor on. [seriously, it would really help my on this Clash roll…]

Inflict your harm, but then Pay the Price. Your foe has initiative.

Finally at HIT at least. That fills the first 4 of the ten ‘progress’ boxes on this enemy.

I’m ready for the thing’s claws this time – mostly – I catch the first slash on the edge of the shield, then bash it over the eye ridge with my mace, right where Ismark’s arrow left me a bright white target gash. The thing punches straight out with its other club-like fist, right at my chest.

I take it on my shield again (seriously, totally having a shield make-out session later); I stumble back into the wall next to the gate, and slam into a release catch hidden beneath the vines on the wall. The small portcullis gate come rattling down, narrowly missing Ismark, and cutting me off.

Our eyes meet through the grating.

I turn back to the gargoyle and clench my jaw. “Yes.” Then I charge.

[Note: this is stupid. I want to acknowledge, for the record, how stupid this is, before I roll.]

Okay, I’m Turning the Tide. I’m taking back initiative, and going straight for a Strike (getting out of this fight by just getting away is no longer an easy or likely option, thanks to that gate coming down.)

According to Turn the Tide, I get a +1 on the roll, and +1 momentum on a hit. Cross all your fingers…

Okay, that’s 3 harm, each one of which fills in 2 boxes on the progress track, which maxes the track out with all ten boxes filled. Nice! I’m coming off a strong hit, so let’s End this Fight. 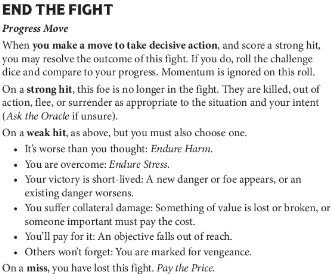 The creature wasn’t expecting either the timing or ferocity of the attack. My mace comes down once, twice, a third time – claws shoved aside and then joints attacked, until the stone begins to the crack and, once cracked, break.

I do not stop. The smashing, breaking, growling attack does not let up until the thing is rubble at my feet and I am covered in thick, violet ichor with an eye-watering, sour odor.

I shuffle over to my pack, retrieve what I can, and shuffle back to the gate, where Ismark is dragging the chains back up. 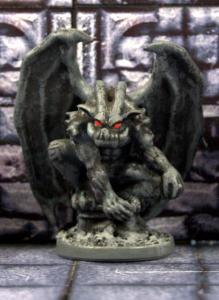 [I’m picking Others won’t forget. You are marked for vengeance. Because seriously: fuck gargoyles.]