The Gates of the Castle

So I’ve been sick for about a week, and finally feeling well enough to get back to Brigitte and Ismark and Ireena. During the break, I spent a bit of time wondering if I missed a chance to swear a vow to Madam Eva – something about breaking the Vistani’s arrangement to Strahd. It’s interesting, because in a ‘normal’ game of Ironsworn I think I would have been quick obvious to do something like that, but with Ravenloft it never occured to me, since the vistani themselves are little more than set dressing (and sometimes a random encoutner) as originally presented.I got stuck in that mindset.

I’m not so far along in the story I couldn’t go back and retcon the vow, but I decide not to – mostly because it’s pretty redundant with other vows i already have going, and because I just have one more ‘open’ vow slot left, and I’d like to save it for something … I dunno. Different. We’ll see.

Once again, we continue up the dark, fog-shrouded road, dead leaves crackling under foot. The road splits in two again, after several miles. A narrower road, curving back northeast, continues toward the castle, while a broader track road leads west into the heart of the mountains and dense forest. Cobblestones still show up in patches on both, but neither sees either much attention or traffic, these days.

[Oracle: Do I stick with the cliche thing at the crossroads, from the module? I think it’s unlikely, and the oracle agrees, so we’re tossing the two-horse carriage waiting for us.]

After passing between the nearest peaks, the narrower road takes a sudden turn around the shoulder of granit and startling, awesome presence of Ravenloft itself towers ahead and above. Ismark comes to a stop just in front of twin guardhouses of turreted stone, broken from years of exposure. Beyond these, a 50-foot-wide crevice gapes between the cliff and the walls of the castle, a chasm that disappears into the darkness below. A lowered drawbridge of old, shorn-up wood beams sags slightly between us and the arched entrance to the courtyard. The slack chains of the drawbridge creak in the wind. A rotting wooden portcullis, green with growth, hangs above the entry tunnel.

[Basically this, but with no eye-glowing crows.] 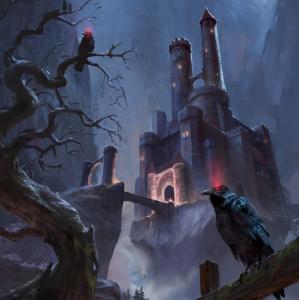 Through the gates and on the far side of the courtyard, the main doors Castle Ravenloft stand open. A rich, warm light spills out into the courtyard. Torches flutter sadly in sconces on both sides of the open doors. 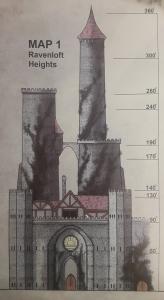 If I want to go in, pretty much the only way is across the drawbridge, which looks reasonably sound but also like it’s definitely suffering from long years of exposure.

So it’s not a question of where we’re going but how; whether we go in like we were invited, or go quick and quiet and try to get out of sight.

Yeah, DEFINITELY want to sneak in. 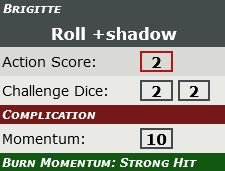 Yeah I’m also DEFINITELY not going to start things off with that crappy roll, so let’s burn my momentum and get into the castle a little further than the front gates before things go south.

The drawbridge looks a bit rough but it’s more than strong enough for three people walking. Once through the portcullis and into the entry proper, we can either go right up to the front doors of the castle (no), or sort of circle around the castle out in the courtyard and see if I can find an alternate entrance.

Thick cold fog swirls around in this darkened courtyard. Sporadic flashes of lightning lance the clouds overhead, but too far away to cause much thunder. Light rain patters down, sporadically. 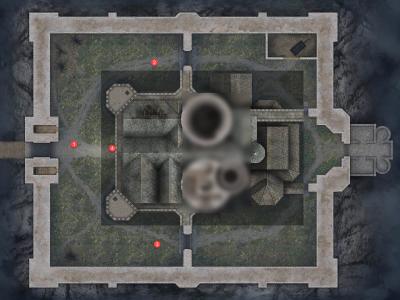 Directly ahead, the large main doors of the castle are wide open. Warm light spills from those open doors into the courtyard. The dark towers of the keep loom above in the mists and drizzle.

Ismark eyes the open doors of the castle. “I’m concerned they’re expecting us.” His tone is flat with irony.

Brigitte might be able to explore the courtyard around to the northern side of the castle, where she can see carriage tracks worn into the damp ground, or south and around, which seems to see less traffic.

1 is roughly Brig&co..
2 and 3 are ways we can circle around the castle.
4 is the wide open front doors.

Brig could also maybe try to get up on top the wall along the walkways, but with the mist and rain, the walls are going to be quite slick and hard to climb.

After a bit of pondering, Brig opts to head south and around the castle (3).

The walls of the castle don’t have many arrow slits or windows in the front half of the side courtyard, and those that do (right off the corner tower) let into a room that is completely dark. It’s impossible to make out anything inside.

A massive wall separates the side courtyard’s ‘front’ and back, (that wall just past #3), and connects the walls of the castle to the outer walls of the keep. That big wall is pierced by a single gate, 20 feet wide, leading through the joining wall. The gate is blocked by a rusting portcullis, which is

NOT raised. Brig will have to try to move it to keep going here. Or double back. Luckily, she IS strong enough to give it a try…

[Face Danger, with Iron – I could maybe be using some rules from Delve here, but give me a break, I’m still sick..]

Ugh. -1 momentum kind of sucks, since I’m already down to 2, but I like that better than anything else. “Face a new Danger, hmm? Okay…”

Brigitte strains to lift the massive iron portcullis, pushing it up through the rusting grooves in the gate opening, and (with a bit of Ismark’s help) manages to get it up to about shoulder height – barely – at which point both he and Ireena slip underneath and through, and I try to figure out how I am going to get through and let the gate down without alerting the whole castle to our location.

Ismark and Ireena have backed away from the portcullis to give me room to get under and dive away from the gate, if that’s what I decide to do, and they are both watching me, so they don’t see the hulking, humanoid shadow rise up from the eaves of the castle several floors above us, and drop – silent as a cat on soft grass – into the stone courtyard behind them, it’s broad wings flaring.

Again, my two companions aren’t looking that direction, but with Ismark’s torch raised, high, I can see the looming form of … one of the castle gargoyles, come to life through some horrid magic, and coming toward them!