Dinner with the Baron

Okay, here we go with the next part of the Delve.

In the Delve rules, I’m categorizing Castle Ravenloft as an Ancient (Theme) Stronghold (Domain). Before I progress, I check the oracle for that theme and domain and see that I’m progressing toward a “Large Hall.” Cool, that tells me where to go, in general, based on what GM-me knows of the place.

Brigitte looks around the chapel. Two of the smaller side archways seem to lead into alcoves that (she guesses) either dead end or lead into stairwells – probably up the dark balcony overlooking the chapel itself.

The main double doors are what draw her attention.

“These should lead us back toward the central portion of the castle,” she says.

“You say that like it’s a good thing,” Ismark says, though he helps her pull the doors open. 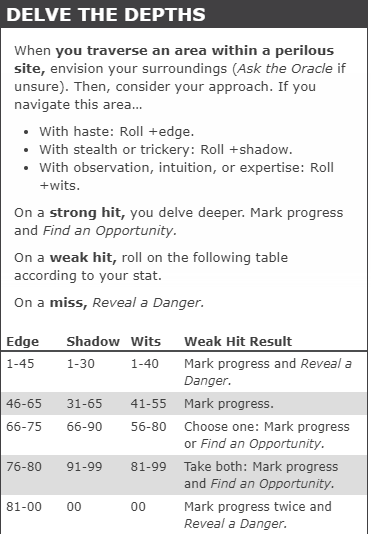 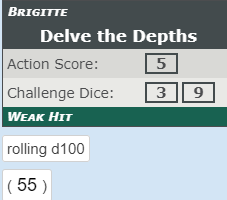 Mark progress. Okay. Looking around at the other options non the table tells me that this is fairly middling result – nothing particularly good or bad. Fair enough. How do I see envision the next section?

In my case, the Delve the Depths move tells me sort of where I should end up, and from there I’m using some of the “Oracle” of the Ravenloft module to get me there.

The double doors open into a long hallway: dusty, long unused, and lined with statues whose eyes seem to follow us as we move past them.

The doors at the western end of the hall are bound in heavy bronze, but aren’t blocked or locked. We swing them open and move into the great entry hall of the castle.

Cobwebs hang from dust-covered columns that line this hall, illuminated by lit (?!?) torches fluttering in sconces. The dust and webs cast strange, moving shadows across the faces of stone gargoyles squatting atop the columns, all around the rim of the domed ceiling of the room. The cracked and faded ceiling frescoes are largely impossible to make out after what may be centuries of neglect. To the north, a broad staircase climbs into darkness.

Sad and majestic organ tones float from a lit hallway to the south.

Okay. Lots to process here. Double doors to the west probably lead to the entryway of the castle. Fine. The stairs seem broad enough to be meant for “public” traffic, so that’s probably going to take us to some kind of big receiving space or a grand hall or dining room or … something.

South is tricky, because on the one hand, it’s lit and more welcoming and generally seems ‘interesting’ because there’s music coming from that direction, but on the other hand there’s the thing where it seems like we were expected and that whole direction seems to scream “COME CHECK THIS OUT IT IS WHERE YOU ARE MEANT TO GO.”

By the same token, I do NOT want to hang around this room, because those gargoyles make me REALLY NERVOUS.

So. Yeah, I’m heading for the trap. Let’s follow the music. 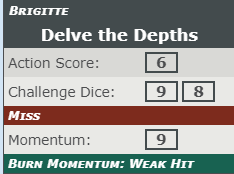 I’m not burning all my momentum just for a Weak hit, so I’ll take the miss and Reveal a Danger.

I can work with that.

Torchlight flutters against the walls of this vaulted hall. To the east, a dark and forbidding hallway runs into darkness. Beside that opening, a suit of armor, oiled and glistening, stands on display in a shallow alcove – the first thing we’ve seen not covered in dust. To the west, large double doors hang slightly open, a steady bright light escaping through the opening. Swells of organ music come from behind the doors, spilling a melody of power and defeat into the hall.

I’m definitely going to check out the slightly open doorway, and I want to be sneaky, which (like my last Delve the Depths) is based on Shadow, which so far as been a total disaster for me. But nevertheless… 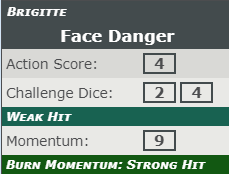 Okay, I’m taking this as a Weak hit, in which I am “delayed or lose advantage (-1 momentum).” I think falling for this lure means I’ve somewhat dropped into the channel Strahd has set for his visitors. Here’s what we see through the crack in the door.

This is a magnificent 40-foot-square room, brilliantly lit by three massive crystal chandeliers. Pillars of stone stand against dull white marble walls, supporting the ceiling. In the center of the room, a long, heavy table stands covered with a fine white satin cloth. The table is laden with delectable foods of every type: roasted beast basted in a savory sauce, roots and herbs of every taste, and sweet fruits and vegetables. Places are set for four (one at the head of the table) with fine delicate china and silver. At each place there is a crystal goblet filled with an amber liquid. At the center of the far west wall, between floor-to-ceiling length mirrors, stands a massive organ. Its pipes blare out a thunderous melody of greatness and despair. Seated before the keys, its back toward you, a caped figure pounds the keys in raptured ecstasy.

Slowly, the music winds down and the caped figure turns on the stool before the organ to face the door, seeming to look directly at us. I hear Ireena suck in a sharp breath. 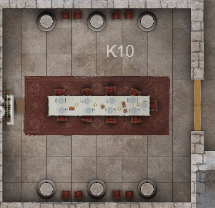 Now, I’m a genre and rpg nerd, so there’s a great big Vampire Lore clue in this scene, but when I ran it with my daughter, she totally missed it because she didn’t KNOW it – so I’m introducing it as one of those “weird vampire things that may or may not be common knowledge,” and seeing if Brigitte catches it. I’m doing this as a Gather Information. 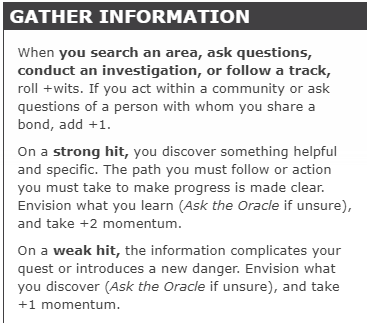 My kingdom for a Strong Hit.

The figure at the organ raises a graceful hand. “Please. Be welcome in my home. Come in. Dine.”

Ireena trembles at my side, but I barely notice – what has my attention is the fact that Strahd can be seen in the mirrors on either side of the organ. Everything the farwardens have ever been told about these fell creatures of the night say that should not be the case.

“It’s some kind of illusion,” I whisper. “A vampire casts no reflection.” I indicate the mirrors, through the cracked doors.

“Please,” alleged ‘Strahd’ says, “come out of the shadows and into the light. Let me see you.”

“Illusion it may be,” Ismark whispers back. “But it’s no mindless thing – it knows we are not yet in the room… or whatever controls it does.”

It’s not a comforting thought, but I feel Ireena calm herself somewhat, realizing she is not facing the monster of Barovia directly. I turn to her. “It is nothing, see? Only a trick. A puppet show.”

It is not Ireena who replies, but the figure of Strahd. “A puppet show? Oh, delightful!” And it laughs: long and loud and mocking, and then vanishes.

The moment the figure disappears, a fierce, bone-chilling wind roars through the halls, blowing out all torches and candles. We hear the screech of ancient hinges and the solid thud of heavy doors slamming shut, one after another, off into the distance; a portcullis clangs down in the middle distance and, ponderously the tired groan of the aged drawbridge pulling up.

Crystal sings in the darkness of the dining room as the great chandeliers rustle in the sudden wind. The fragrance of food wafts its way through the darkened hall.

“I think we may have offended our host,” Ismark mutters. “We should move.”

“One moment,” I say, shoving doors open, much to my companion’s surprise. Ismark manages one aggrieved “hssssst!” as I stride into the now dark room, following my nose and unslinging my pack.

We’re being taunted by the smell of food and right now my Supply is at 3, so… 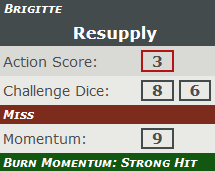 Oh screw you, dice. What the hell, man.

Fine. The game wants me to burn momentum so bad, I will. Strong hit on Resupply says “on a strong hit, you bolster your resources. Take +2 supply.

I scoop the fruit and some of the least messy foods, working mostly by smell and touch, wrap them up in cloth napkins probably worth more than all the clothes I’m wearing, and jam them into my pack, then stride back to the door, where Ismark has got a torch going.

“I’m angry,” I say, though my face and voice are calm, my eyes scanning the area. “This Strahd is picking the wrong sort of fight.”

I’m going to Delve the Depths again, and roll the Oracle to get an idea where I’m headed: a 97 means “Something Unusual or Unexpected.” Duly noted, Oracle. Thanks. Now then…

I’m Delving based on Observation and Intuition (what I can see, and what my gut tells me), so that means +wits – to heck with any more of this +Shadow nonsense.

That’s fine. I roll and get a 43 on the results table, marking Progress on my way to “Something Unusual or Unexpected.”

Brigitte takes in her options. Heading back to the main hall with the gargoyles looming seems like a bad plan, the only other option then is the dark, narrow hallway just across from the dining room of Vampiric Fuckery.

Theory: Vampires are melodramatic as a form of behavior-based informational security. While their ridiculous collection of odd mannerisms make it easy to tag them as vampires, it also makes it extremely difficult to tell which of those mannerisms stem from an esoteric weakness or limitation on their powers, and which are just them being fuckin extra. In this essay I will…

A chilly wind rushes down the circling stairway at the end of this short hall, seeming to kill the very heat of the torch Ismark carries. The stairs spiral both up into the castle and down into the depths.

I do NOT feel like going down into the depths right now, so it’s up one floor and an unadorned wooden door… 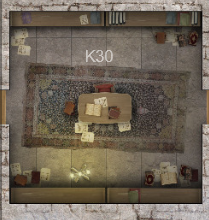 Dusty scrolls and tomes line the walls of this room and are scattered across the floor. In the center of all this clutter stands a huge accountant’s desk. A old man slouches atop a tall stool, scratching a seemingly endless scroll of paper with a dry quill pen. A rope hangs next to the old man from a hole in the ceiling.

And… that’s where I’m stopping for now. Next time, we’ll meet Lief Lipsiege, accountant. (Something unusual or unexpected.)