Well, it’s been a minute since I’ve been able to find time to play, but luckily I can read all my lovely game notes and get caught right back up.

The google doc where I’m saving everything is 96 pages at this point, which makes it exactly three times longer than the original Ravenloft I6 module. Nice.

Brigitte sleeps for seventeen hours. Gets up, sees to her necessaries, eats, and goes back to sleep for another six hours, which puts us close to 24 hours since our merry band staggered back into down. Probably enough time for Gertruda to do something stupid, but I don’t have time to worry about that right now.

What I should be worried about is what the Qashida are up to. I realized after wrapping up last session that my failed Gather Information probably gave the Qashida (the Threat attached to one of my Vows) an opportunity to get up to shenanigans, so let’s see if they take advantage of it. 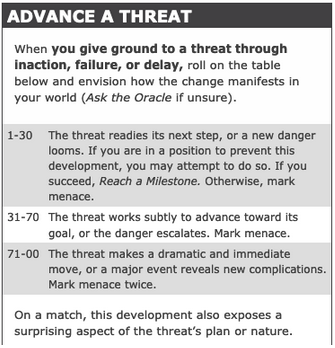 Okay, so they’re basically working the shadows, sneaking up on me and I mark a second menace on that threat. Fiiiine.

So I’m a bit demoralized (down by 2 in spirit) and my supplies could be better. I’m back in town, which is exactly what the Sojourn move is FOR, so I’m going to do that. There’s a lot going on in this move, so buckle in. 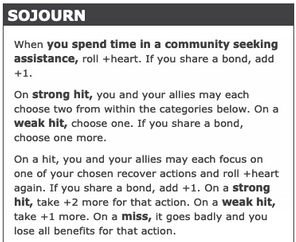 Okay. That first bit is pretty straightforward. Roll +heart, and I do have a bond with the village, thankyouverymuch, so I’ll be having that +1. 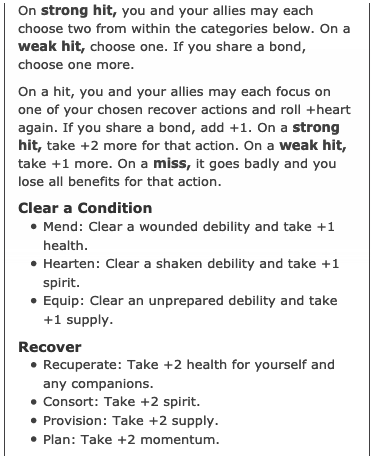 I’m focusing on the stuff in the Recover section, and since I share a bond with the town, I still get to choose two things.

So, rolling heart a couple more times, both with a +1 from the bond. You’ll have to trust me on these, since I’m not going to copy-paste in two more rolls for the same move.

(This is a VERY roll-y move – if I was in a group of three players and got a strong hit here, that’s 7 or eight rolls at the table before the whole thing is wrapped up. Crazy. It’s worth noting that Starforged does this differently now – there’s just the one roll at the top, and then all the selected recovery actions are assumed to have succeeded at a similar level, basically. Much faster and cleaner, without the Mouseguard-like messiness of “oh, I screwed up all my recovery phase rolls, so now I’m worse off than I was.”)

Anyway: In Ironsworn, I still have to roll, and on my rolls I get a 9 against a 6,5 and an 8 against a 4,3 (I’m quite happy to have prioritized Heart when rolling up Brigitte) so that’s two Strong hits for Consort (+2 spirit), and Provision (+2 supply), which maxes me out. The Strong hits give me 2 additional points of both spirit and supply recovery, but that does nothing for me in this case – I’m already maxed out. It’s a good problem to have.

I envision this as a pretty chill day spent around the town. Word gets out that I and Ismark and Ireena braved the Castle and returned alive and basically unharmed, which is pretty much unheard of in living memory when it comes to outsiders who decide to mix it up with the Baron. Ismark embellishes some of the heroics a bit, and the mood in the village lightens considerably during the day, especially when Gertruda and Mary are seen at the front door of their home. It’s just a generally upbeat day of smiles and nods and a lot of hopeful faces.

Brigitte will happily take it, though she turns down any offers of free dinner and bunks down in the chapel again, reasoning that right now it’s probably the safest place in town if Strahd decides to make a move. (Hooray for a high concentration of major holy artifacts.)

So. One good day. Let’s see if we can ruin it by asking awkward questions the next day.

“What can you tell me of a cult called the Qashida, shopkeep?” She asks, not so casually, the next morning. 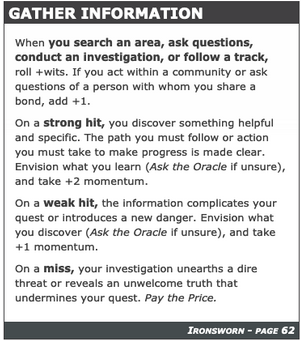 That’s a natural six on my action die, plus the bonus from my bond with the village. Hot dice tonight.

On a strong hit, +2 momentum (bringing me to 10), but more importantly the path I must follow is made clear.

I’m going to ask the oracle about the next step, because I’d like to see if it gives me an interesting twist.

The shopkeep’s eyelids lower, and he shoots a glance at the door to the street, but the only people within earshot are Ismark and Ireena. He seems to relax.

My first roll on the “Character Goals” oracle was “roll twice”, and I followed that up with Protect a Person, and Create and Items.

“They are sworn to the Count,” whispers the man, his lips barely moving beneath a bushy mustache. “Generations, they have been his willing lapdogs, as bad as the worst Vistani.” He spits to the side.

“Power, why else?” The man’s face looks sour. “The baron has been alive for centuries. The knowledge he has – the secrets he knows – they want them. Rumors say there is some unholy phylactery they would assemble, if only they possessed the final puzzle pieces. They think if they can keep the baron beholden to them long enough, they will have it.

The words chill me, because I think I know what it is the old man speaks of.

And I know now I must return to the castle as soon as I can.