So last night we got got together to work through the Pitch Session for a new Primetime Adventures game.

((For those who don’t know, Primetime Adventures is a game meant to emulate action/melodrama television shows. The purpose of play is to create a short-run television series (5 or 9 episodes) driven by the Issues of the show’s stars. Players in PTA are both the Actors of their protagonists as well as Authors of the TV series. The GM (called the Producer in this game) has two jobs: make sure scenes move toward Conflict and work the overall story arc for the Season into play.))

Pitch sessions for PTA are always strange beasts, because people come in to the session with random ideas for shows, almost none of which ever make it through the whole process, and by the end, you have something pretty cool that everyone’s excited about… and no one’s entirely sure how it happened.

Right, so here’s what happened.

First, I was running a little late from a class I was teaching, so we got going around six-thirty or so. I had a notebook in my pocket with a few pitch ideas, and not much else.

So we chatted a little bit and then I asked everyone what kind of television show they didn’t want to see / do. Tim said that he really wasn’t much into the idea of a ‘straight’ one-hour dramedy like Gilmore Girls or Felicity or something like that. No one looked too disappointed by that – I think we’re the sort of folks who expect a little genre weirdness in our TV. Cool.

Meera spoke up and requested we avoid setting things in any war between the Amercian Civil War and today, simply because her history-fu for that time frame was weak. Again, that sounded good to everyone (for myself, I was merely homesick for the “Strange Allies” PTA game we never finished.)

That was pretty much all the “I’d rather not”s for everyone, so we talked a bit about what kind of pitches we had.

Randy piped up (a bit tongue in cheek) with the idea I dubbed “Left Behind… Because You’re An Asshole”, where something akin to the Biblical Rapture occurs, but only people who are, objectively, good people actually transcend.

We talked a little bit around this topic, until I admitted that, while I liked the idea of a kind of “oh crap, all these people are gone, how will we survive?” event, the idea of an event with biblical elements left me pretty cold.

Tim jumped in and said he was also into the idea of a kind of a post-apocalyptic survival story, though not just “straight zombies” in the vein of The Walking Dead, which is an idea I’d mentioned earlier in the week.

((I’d like to pat us all on the back at this point for not mentioning the Swine Flu once the whole night.))

Right around that same point, Tim also mentioned that he enjoyed “resource drama” – where you’re scrounging for supplies and making do with whatever you can find. The A-Team was mentioned, which is a little too camp for me, but also elements of Mad Max and things of that nature.

We threw around a lot of Survival Drama at this point, and talked about the kinds of story arcs you could do in there: a hellbent run from Point A to Point Z, basic survival, defend the base, find a weakness of and destroy the Big Bad… things like that.

I thought it might be interesting to start well AFTER the initial “inciting event,” and Tim agreed, mentioning that flashbacks would certainly explore that event more.

So we tossed around ideas of what the apocalypse might have been. Zombies… vampires… dragons… robots… robots created to fight zombies (yes, seriously), then turning on their owners…

Somewhere in there, Tim commented that some kind of Faerie Attack had never been done as an Apocalypse Event, and I said something like “Well, then we should do that.”

(I believe Meera would like me to state, for the record, that the faeries were not her idea… she just (gleefully) went along with it.) 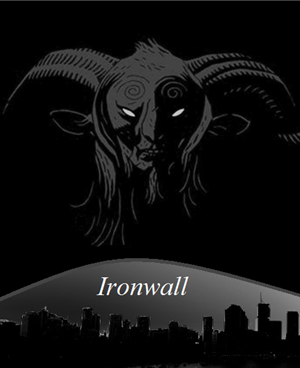 That seemed to provide quite a lightning rod for ideas after that point, and coalesced into a show concept that The Producer is tentatively calling Ironwall (until we think of something yet more awesome).

SOMETHING had caused the Fae to reemerge in our world, and those fae (a collective term that we decided encompassed everything from fairies and pixies to trolls and dragons to bakemono and oni — all presented in the style of Hellboy II and Pan’s Labyrinth’s art team) were Very Angry. The result of this re-emergence was hundreds of millions if not billions dead (either from fae attacks or from jumping off bridges when they realize that the bogeyman is real).

We tossed around several ideas about WHY they had come back, including:

… and in the end we decided it didn’t matter, or that it would come out during the show itself. The basic idea was that humanity was on the ropes, hiding out in the ruins of big cities, where the Iron content was high enough to weaken the fae magic. Something had recently happened to put the status quo in danger, and Our Heroes would be doing something about it.

Tim asked what would be happening that would bring the characters together, and Randy came up with a pretty awesome idea (and the First Scene of the Pilot): somehow the Fae had made it into the City (tentatively, Manhattan – Detroit would work better, but we know nothing about Detroit) where the Settlement was and had swapped in EVERYONE’S children for Changelings. The “First Scene” idea for the Pilot is all these adults dragging their crying, screaming children into the middle of the settlement and throwing them into a bonfire, where the audience finally sees that the people in the hoods and robes are not the bad guys, and that the things in the fire are monsters.

That opening scene lets us do a lot of stuff during the pilot:

… which is basically everything a Pilot is supposed to do.

There was a bit more background stuff, during which it became clear that SEX was going to be a big element of the story, because the Fey need humanity to refresh their bloodlines (and humans… well, are human, and the Fae are hot and sexy). Plus, Tim made “Sex with Fairies” his character’s main Issue. I wrote all that background stuff down in the Series Bible on the Wiki page, so check it out.

Then we came up with characters:

So… right. That’s where we are now. Pretty much nothing at all like any of the pitch ideas we’d been thinking of, pretty cool… and no one really knows how we got there.

I’m rather excited to play.