I got a copy of The Burning Wheel… hmm. My first mention of it on the blog was early 2004, and I know it was the first edition of the rules, so that probably means sometime in 2003.

I read some of it. It intimidated the hell out of me (and turned me off — I was NOT in a good place to read about a super-crunchy rules system back then). I let the pair of books accumulate dust for a long time.

Sometime around 2006 or 2007, I started reading a lot of good things about the revised version of the rules (BW-R), so I ordered the shiny new version.

And tried to read it.

Too much. I let that pair of books accumulate dust alongside their older brothers.

But I kept reading those interesting actual play posts while I ran other games. If it came up in conversation, I mentioned that I really wanted to play the game with some people that understood it before I tried to run it myself. My gaming was taken up with other things — limited gaming time and ever-shrinking schedules meant I was more likely to choose games with a lower level of required brain-investment than BW. The thing with Burning Wheel is that it really requires system familiarity — it is through system knowledge that one achieves nominal – rather than exceptional – performance from one’s character. That’s a little daunting.

I never quite abandoned my interest in the game. Everything I heard about the game sounded – to my tactical-loving side – quite cool, and the raves and praise heaped on the “story” elements of the game (Beliefs and Instincts especially) were just as effusive. But despite all that, it was still a game that took too much time to learn, too much time to prep.

Then came Mouse Guard. A streamlined version of the Burning Wheel engine. The sparest, most elegant iteration of the rules, to date. It was, by all accounts:

I’ve since run MG quite a bit. I’ve enjoyed almost every session immensely, but it’s been hard for me to get my ‘regulars’ to dive into an MG game, basically because of the setting.

But I really wanted to get into that system with them.

Burning Wheel. I felt like MG had been a good primer on the system — I felt like maybe I was ready to understand Burning Wheel. Thus emboldened, I dove into the system. Once the main books were read and grokked, I ordered the rest of the Burning Wheel books: Monster Burner, Magic Burner, and finally the new Adventure Burner, which is basically a 350 page collection of engaging epistles on running Burning Wheel, compiling years of experience and discussion.

On the second page, I read this (paraphrased):

Burning Wheel asks only for an open, honest desire to try it out and see how it works. You may be reluctant, or you may be skeptical — that’s natural, but for the game to have a hope of working, everyone at the table has to say “Let’s give this a fair shot.”

Last night, we finally got to give it a fair shot. 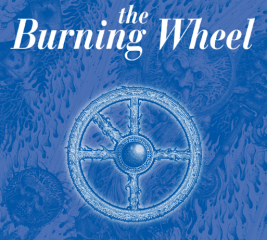 Burning Wheel is a weird critter

On one hand, it is far more character focused and player-driven than a traditional fantasy game, but it uses FAR more intense rules than the nontraditional, “lighter” RPGs I’ve played before, like In a Wicked Age or Shadow of Yesterday or Heroquest or… hell, anything. I’ve mentioned that the rules are crunchy, but they’re crunchy in odd places. For example, there’s no battlemat or miniature rules (honestly, I think they’d confuse things), but there is SUPER HIGHLY DETAILED rules for positioning in combat, weapon length, weapon speed, armor penetration, and all that stuff.

And of course all the major conflicts are resolved through double-blind action scripting, which can be… harrowing.

I loved the way Beliefs and instincts worked. We played a one-shot (that we decided to stretch into a second session next week) with pre-gen characters lacking only a few player-selected items to be finished, but given the Beliefs and Instincts right at the front of the (seven page!) character sheet, everyone had an immediate grasp on their character and started moving things toward the stuff their guy wanted.

Implied Details. Burning Wheel characters are like the game itself — detailed through hints. Burning Wheel has no setting, but the lifepaths (NONE of which have actual descriptions or explanations) very strongly imply a culture and perspective through the skills that are available and the Traits that one gets. The characters are like that — you look at three Instincts like “Always lead prayer at the appropriate hours” and “Always speak my mind” and “Let the slave do the work”, and you have a pretty clear picture of a character — a picture you’ve deduced only via the things they do.

Modular Rules. Burning Wheel rules and the Characters are alike in other ways. The system itself is modular; whole chunks of it can be ignored or simply kept on the side until needed. Likewise, I mentioned the seven page character sheets, but in play we only really looked at the first page (Beliefs and Instincts and Traits (and stats)), and the fourth (skills). Randy had to look at the combat and injury page once, and De had to look at the page where her Faith stuff was at, but they’re outliers: yeah, it’s seven pages. The rules are thousands of pages in total… but most of the time you only need the first chapter.

Color through mechanics. There is very little ‘color fiction’ in the books — almost none, actually. The culture and setting is conveyed through the skills and traits. Likewise, there is very little space on the character sheet for the ‘character concept’ (and that little entry is largely ignored once play starts), but the character’s Beliefs and Instincts and Traits and skills speak volumes  — they are vitally important to play and constantly referenced. Like all good characters in fiction, Burning Wheel characters are best understood by what they do and why.

The game is deep. Not like water is deep, or a philosopher is deep, but like a cave is deep. There are rules in there that won’t get touched for months if not in fact years of continual play. You can do one-shots in Burning Wheel, and short-arc adventures, but this is a game optimally designed for long term play. In fact, I think it would play *best* as a weekly, weeknight game (two and a half to three focused hours) that went on for at least six months.

I also think it would play as well with six players as with one player and one GM. Differently, but just as well. That’s pretty remarkable in itself.

How did the game go?

I’m going to recount the game itself in a second post, but in short I thought it went well. There was a lot of page flipping, and I wussed out on damaging a character at one point, and I feel like Tim was kind of thumb-twiddling for too long during the session, but on the whole it was good, and there was a lot of interesting stuff.

At the end of the night we could have called it complete: we had the shape of the thing in our minds, though no one’s Beliefs/Goals had been resolved.

But the players unanimously decided to come back next week and find out what happens. Plans are being planned — I can see it in their eyes — stuff is going to happen; beliefs are going to be fought for.

I think we have a winner.