It seems like everyone in the EvE blogoverse is talking about Planetary Interaction right now, and since I’m wrestling with setting up something like forty PI colonies right now, I figured I’d share the tiny little bit of information I’ve learned on the process.

Planetary Interaction is a very terrible, Civ-like mini-game in EvE that lets you exploit the resources of all those balls of dirt floating out there in your nice clean Void. The basic idea is:

A lot of the stuff you make in the game is created via EvE’s own particular brand of crafting (a subject I’ve already written about),  but a fairly sizeable chunk of stuff gets created via factories that players set up planetside all around New Eden and Anoikis to extract raw materials and turn them into useful things like Mechanical Parts, Enriched Uranium, Polytextiles, and Livestock.

If you don’t know what you’re doing, you’ll fiddle with this once, retrieve your crappy low-end product one time, sell it for pennies, wonder why you bothered, and never go back and mess with your colony ever again.

If you do know what you’re doing, a single character with about twelve days worth of skill training can produce over 20 million isk worth of materials per day, via a passive income source that (once you get it all set up) takes about five minutes of tweaking every few days.

Now, as it happens, the quality of a planet in terms of the amount of raw materials it produces is determined by the security level of the space it’s in. Wormhole space is the lowest of null-security space, therefore, planetary interaction colonies in wormhole space can be quite profitable, if you happen to have set up shop in a system with a good selection of planets. Even if you haven’t, it’s possible to use PI to create most of the materials you need to make fuel blocks for your tower, and maybe even sell off the excess.

Let me give you an example, using a common PI product: Coolant.

(Non-EvE players: I won’t be hurt at all if you stopped reading here.)

Coolant is (relatively) easy to set up, and it’s pretty easy to find planets on which you can make it, since it can be produced on virtually any gas planet, which are very common in EvE.

As an added bonus, Coolant is quite profitable if all you want to do is make it and sell it. The obvious reason (and the one everyone thinks of) is because it is one of the ingredients in the fuel blocks used by every kind of player-owned tower in the game.

So, you know. Coolant.

It gets used in stuff.

It’s not one of the “20 million isk/day” products, but it’s pretty decent, and not too horrifying to set up.

So this is your basic Coolant PI set up on a Gas Planet, assuming you have the Command Center Upgrades skill trained to 4 (which you should absolutely do). 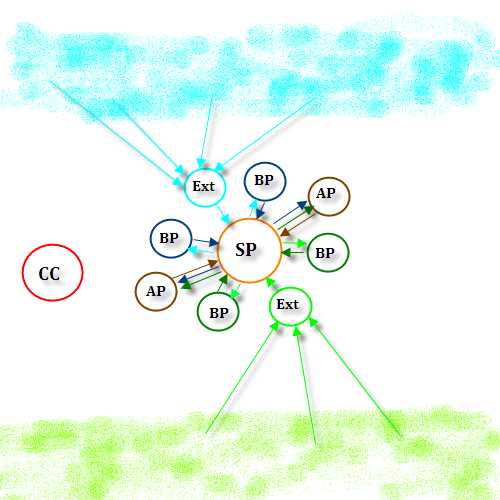 … and here’s how I put it together.

When your starport starts to look full of nothing but coolant or the m3 of coolant is getting close to your single-trip hauling capacity, send it up to the POCO, fly out, and pick it up.

The only difference between this and doing some other tier-2 product like, say, Mechanical parts on a Barren world, is that with mechanical parts, you aim to pull 18000 units of basic junk out of the ground each hour, and you use more processors (6 BPs and 3 APs). You can do this because most planets are smaller than Gas planets and require less infrastructure to run, so you can build more Processors on smaller worlds. It’s otherwise the same.

And that’s PI, which I’m spending an inordinate amount of time doing right now, so I can fuel the tower and (hopefully)  even enjoy some profit in the future.