No time or inclination to put up an organized post, so instead you get a bunch of random stuff I’ve been meaning to share.

February was our corp’s second-highest kill total since the corp was formed. Only December (when we were part of Ushra’Khan and involved in many fleets violently and constantly clashing over the Eugidi constellation) was higher, and only barely. February was also (no surprise, really) highest in terms of ship losses, though we still came out well ahead in the end.

FNGs: We’ve brought in quite a few new pilots – mostly guys recovering from post-boredom wormhole syndrome – and they have taken to Faction Warfare like ducks to water.

Anyway: welcome to the corp and quit making the rest of us look like we’re fucking afk. Jesus. 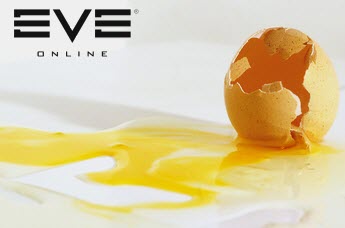 Our monthly combat efficiency would be better if we hadn’t lost a bunch of pods early in the month (I was certainly not immune, and I have the newly-retrained Battlecruisers 5 to prove it 🙁 ). That got a lot better in the second half the month, so I’m going to chalk that up to a string of bad luck and smart-bombs.

My dislike of ECM system has been replaced by the broken mechanics around off-grid boosting alts. It’s getting harder and harder to find a fight with anyone who doesn’t first “need” to get their their half-billion-isk tech3 cruiser in-system to hide at a safe spot and provide ridiculous boosts to a pack of shitty little frigates.

The guys in our corp could do off-grid boosting — we certainly have the skills required — but we don’t because off-grid boosting is (in terms of risk to reward) broken, and I don’t like using broken mechanics.

Following a particularly ridiculous fight with whatever I.LAW is calling itself this month, Em and I have established a new policy with regard to boosters: if you want them on the field, great. If you bring them in system and hide them off-grid, you are not going to get a fight. Period. Full-stop. No exceptions.

One way of looking at this is that it’s just good target selection. To quote a certain FC: “If I see a fight, and know we have no chance of winning why should I fight?”

But it’s not really about that, it’s about rewarding certain kinds of behavior. To go back to my playground analogy, if you’re trying to organize a dodgeball game, but you always bring a medicine ball and the flubber-enhanced sneakers, no one’s going to play with you. Sure, it’s legal. Yes, it’s currently ‘working as intended.’ Fine.

But it’s not behavior I intend to encourage. Sometimes, I censure my kids’ behavior by simply walking out of the room — if they want to be fucking annoying, that’s fine: they’re 2 and 7, their brain chemistry is ridiculous at that age, and maybe they can’t help it. But I don’t need to subject myself to it, and I’m not going to. I find the same sort of response is the easiest option for me in Eve as well; there are people who don’t roll with off-grid boosting bullshit every day, and I can easily go and find them. Denying known off-grid booster addicts a fight doesn’t hurt my game at all.

You want to leave the medicine ball at home, you’re welcome to rejoin the rest of us. Until then, you can pound sand.