So about a month ago, it became evident that the pilots in our corp would need to get into replacement ships often, and probably in a hurry.

It also seemed as though, while all the pilots were pretty smart at building interesting ships, sometimes we didn’t need ‘interesting’ as much as we needed ‘good and effective’. There was nothing wrong with the ships we were flying, but there was some functionality I often wished we had in the fleet that simply wasn’t occurring to anyone.

At the same time, I wasn’t (and never will) hand down some kind of ‘directive’ on what people can and can’t fly.

So, with all that in mind, I flew over to a market hub and spent most of an afternoon and evening buying the parts for about 50 ships, hauling them a few jumps away from the warzone, putting them together, and setting them up on corporation-only contracts, at cost.

The goal was two-fold:

1. Make it quick, easy, and cheap to get back into the action if you lost a ship.
2. Increase the odds someone would be flying one of those go-to ships I often wished we had.

And at the same time, if someone wanted to do their own thing, then no problem: this was in no way stopping them.

I got everything all set up, and Ty sent out a corp-wide message informing everyone that the storefront was open.

I probably shouldn’t have used the word “storefront.”

I also probably shouldn’t have left the default name (mine) on every one of the ships I’d assembled.

I’d like to say it stopped there, but of course it didn’t.

I have a habit (I think it’s a good one) of reminding everyone to turn on their Damage Control modules as we drop cloak and warp toward a fight. Mostly, I’m reminding myself, but if it saves someone else’s ship, then all to the good.

Apparently, I say it often enough to be noticed. 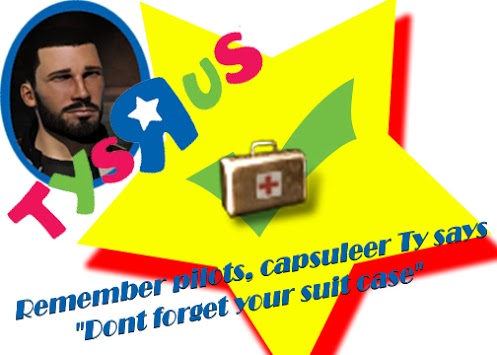 And it’s not always about me. The most recent addition to the advertising campaign celebrates how March has been going.

I also like that it doesn’t specify whether it will be our ships or the opponent’s that will blow up — whether the Slasher pictured is more deadly to the target or the pilot. This is what’s known as “Truth in Advertising.”