April got off to a rocky start, so I wasn’t really sure how things would look as the month wrapped up. Let’s review.

After a really, really excellent March, our hunger for good, challenging fun led us to take a lot of fights we probably should have avoided. Adrenaline withdrawal had set in, and the junkies did not react well. One week into April, we’d racked up about a third of the losses we had all through March, and one-twentieth of the wins. Ouch.

It wasn’t, in my opinion, that we were flying any worse, but we were making poor decisions, often fueled by desperation for some action. Everyone has nights like that in Eve, I think, but in this case we had about eight days of it, and it had gotten a little ridiculous. Familiarity had bred too much contempt, I suppose — it seemed the (vanishingly few) Amarr-held systems were full of nothing but off-grid fleet boosters, up-shipping nonsense, or (most often) pilots who simply wouldn’t engage.

In short, we felt we knew the enemy’s standard ploys and found them tiresome.

A change of scenery was called for. New territory, new faces, different pirates to shoot. Tuskers and Black Rebel Rifter Club active in the area — generally always a plus. Gallente loyalty points to earn. More familiarity with the whole war, and basically doubles the space we can effectively roam.

Everyone seemed to agree, and off we went. Carriers were unlimbered, beacons were lit, and the HMS Marmoset set out for the “other front” in the war.

Things went moderately well. Probably at least two weeks were chewed up trying to figure out where the best options lay in terms of good opponents, but we slowly managed to pull ourselves out of the hole we’d gotten into.

There were also some cultural shifts to deal with.

Eventually (following another smaller move where we settled into more permanent digs), we found a hot pocket (heh) of Caldari resistance that seemed to suit us right down to the ground. It called for a fairly significant shift away from frigates and into destroyers, but we’d wanted to try that sort of thing out anyway. The tail end of April saw us back in the brisk business of explosions.

Our ship losses for April were down slightly from March and February, and the total and average value of the ships lost was lower, even though we’ve started flying larger classes of hulls. Our wins for the month didn’t match the ridiculous totals we tallied up in March, but they beat February both in raw volume and value — the first truly active “post Ushra’Khan” months. The rough, rough start of the month hurt us, and it took us awhile to find our feet in the new war zone, but we still ended up ~65% efficient for the month. Several pilots went inactive when we moved to the Gallente front, which affected our numbers slightly, but our active pilots certainly picked up the slack.

Solo kills were down a bit, which I attribute to a general unfamiliarity with the war zone and not knowing if an apparently solo opponent was actually solo or just bait, but started to pick up near the end of the month.

Friga — wait what? Actually, the most-flown ship for April was a destroyer. We racked up almost three times the number of wins in a Talwar then we did in any other hull type, and five other destroyer hulls made the list as well, whereas in March we didn’t (successfully) fly any.

Once again, escape pods made the Top 10 list for “ships flown by a pilot during a successful fight.” I call this the “putting skin in the game” statistic.

How about me, personally?

My statistics pretty much mirror the corp. April was all right: not my best month, but easily in the top three. I lost a few more ships than I have in the previous two months, but at the same time April marks the third month in a row where the total ISK value of my lost ships has gone down. Overall, I pulled my all-time efficiency up.

I didn’t fly quite as many different ships has I have in previous months, but I did vary a bit more in ship classes. Talwars topped the list, followed by Fed Navy Comets. I got wins in some other types of destroyers, one quite memorable fight in a Vexor cruiser, a couple in a Prophecy battlecruiser, and a single very special kill in stealth bomber that earned me both a bounty and a string of invective-filled evemails that culminated in this zinger:

“I hope you die of cancer.” 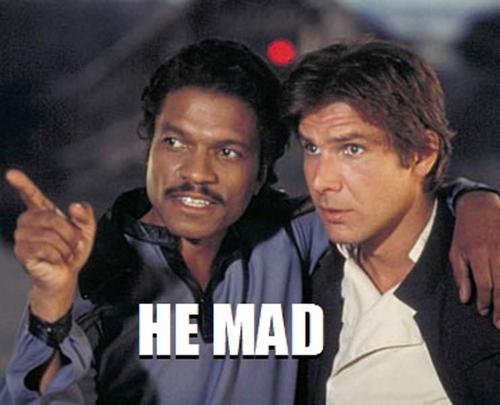 And what about the War?

I’ve already talked about the differences between the Calliente war zone versus the Minmatar/Amarr, and why our old stomping grounds got a little bit too trampled to bring the fun. I still don’t know if I love the new area, but we’ve got stuff to shoot at, and maybe some null-sec roams in our future, so we’ll see how it goes.

As a side note: if you’re interested in trying this kind of gameplay out, drop me a comment. The corp has no assets, no bank account, and no intel worth the effort of a spy, so we’re pretty welcoming to anyone interested in learning how to blow up, take some guys down with you, and have fun as you explode. So far, our ‘new’ recruits include former wormholers, ex null-bloc soldiers, people we’ve blown up and then recruited, and one random guy who opened comms with me as we flew through the system he was in and shouted “Please take me with you!”

Generally speaking, just don’t be dick, don’t talk in local, don’t whine when your shit blows up, and we can talk.