March was a really, really good month for our corporation. By most any standard, it was the best month the corp has had since it was formed, and aside from the dry statistics, there’s the more interesting fact that we had gotten fairly well-known in the warzone.

“Props to you and your guys, Ty,” said one enemy pilot in local comms. “You guys always bring a fight.”

April… has not gone so well.

Here’s a sample of our comms this month:

“Can I take on a Hookbill in this Atron?”

“There’s a dragoon in the medium complex… can we even fight that?”
“Let’s… give it a shot… I guess?”

This was two guys in slashers. The Dragoon had backup.

We did. It ended about how you’d expect.

“It’s horrible odds, but… whatever. We’re only two jumps from Auga to reship.”

“We’re only three jumps from Auga to reship.”

“We’re only four jumps from Auga to reship.”

“We’re only five jumps from Auga to reship.”

“We can always fly back to Auga to reship.”

In fact, in the last couple days, everything is grim. Tone of voice. Topics. The sense of desperation.

The desperation of a junkie. 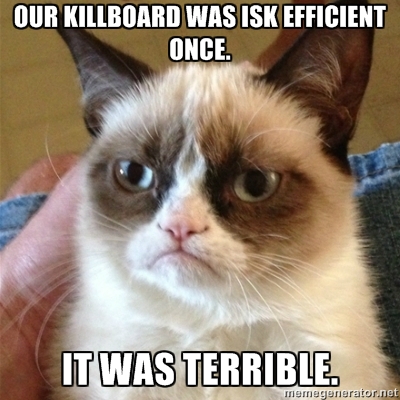 In April, so far, the Corp has already racked up about a third of the losses we had all through March, and have snagged about one-twentieth of  the kills (my personal ratio is even worse, at least in terms of losses).

It seemed due to the simple fact that there are less fights available: the Amarr have been particularly scarce, especially in groups anywhere close to the size/composition we can realistically engage, and when we get anything that looks even sort of doable (if you cross your eyes and squint), we go for it.

Most of the time, though, what we decided was ‘sort of possible’ was really nowhere near that, but we go for it anyway.

Because March turned us into junkies, and April is making us go cold turkey.

Consider: in March, I was involved in at least one hundred fifty fights, give or take. Not all of them were recorded, because one side or the other ultimately managed to escape, but that’s a (low) estimate of the number of times a fight loomed. Probably, it was closer to two hundred, so let’s split the difference and call it one hundred eighty.

That works out to six fights a day, give or take, during March. Every day, six jolts of adrenaline (yes, adrenaline dumps from MMO PvP: an experience — for me — all-but unique to Eve).

A guy can get kind of addicted to that kind of thing.

We’ve got guys in the corp who, in February and March, have gotten in more fights than all the rest of their time in Eve, even if you count shooting NPCs.  It’s fun. It’s exciting. There is really nothing else in the game like it.

And we’re taking those chances anyway. Of course. We’re junkies.

It’s not… good.  The frustration from not finding fights is bad already, and coupled with the stream of bad fights ending badly…

Time to make some changes.