Today, I was walking around the neighborhood with my daughter, looking at trees and houses. (There are only 3 or 4 house templates in our suburb, and we like to try to spot ‘our house’ in other places.)

While walking, we were talking about the concept for Save Game. (Short version: there’s a world-destroying evil virus on the internet that can only be stopped by the characters from videogames – Wreck-it Ralph meets Lord of the Rings.)

I paused. “I think it’s supposed to be characters like… Mario, or Samus, or the Minecraft guy.”

Now, I’d heard her and her friends mention “Steve” in the context of Minecraft before, so I knew who she was referring to. “No. I mean the guy you build stuff with. Steve’s just that one zombie guy with the different-colored shirt from all the others, right?”

“Right, but he doesn’t start out a zombie. He starts out alive in every world.”

“Really.” This was news to me.

“Yeah. His brother kills him.”

This was really news to me. “What?”

“Yeah. My friends and I figured it out. See…” She settled her hands into ‘this is an involved story’ position as we walk. “There’s this one guy who can get into your worlds, even your private ones, and he goes from world to world, looking for the really good worlds.”

“He glitches into them,” she said, as though it was obvious. “And when he finds a really good one, he — well, the first thing he does, he finds Steve and kills him.”

“Then he glitches the world. It kicks you out of the game, and destroys the world so you can’t ever get into your world again and even have a really hard time making a new world after that.”

“He takes them,” she explained. “He takes all the really good worlds away from the kids that make them.” She paused. “From grown-ups too, I guess.” (She’s vaguely aware that grown-ups also play Minecraft.

“Has this ever happened to you?”

“No, but… I’ve got one world I really like, with a bunch of really cool stuff, and I try not to log into it very much, because I know if I go there too often, he’ll find it.” She scuffed at a leaf. “I’m sort of expecting it to happen, eventually. It’s like fate.” 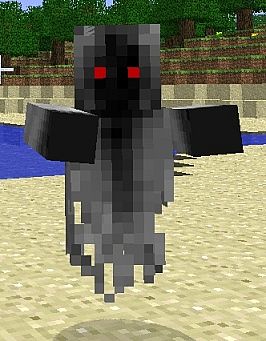 We walked for awhile, then she said “You’re being really quiet.”

“Well,” I said, “I’m pondering the fact that you and your friends basically invented a Minecraft/internet version of the book I read last week.”

“Yeah,” I said. “And I can’t decide if that’s really cool or incredibly creepy.”

She shrugged and grinned. “How about both?”