With the holidays looming, my schedule was basically nuked from orbit and much of my normal online/offline tabletop gaming (which wasn’t a LOT to begin with) was disrupted, to put it mildly. Then one of my Monday-night players linked Adam Koebel’s first look into Ironsworn – and reminded me of the game, which I’ve actually had for a while (the PDF is free) but hadn’t dug into. So I decided to do that.

Because I had no one else to play with.

You see, Ironsworn is a PbtA fantasy adventure game (same inspirational/systemic roots as Dungeon World, Masks, whatever) but supporting three “modes” of play (Guided (with a GM), Co-op (several players, no GM), and Solo) equally and viably.

I enjoyed Adam’s video, and doubly enjoyed the actual play podcast from the game’s creator and his son (search for “Ask the Oracle” on your favorite podcast platform.) Thus inspired, I decided to do a game.

Now, by default, Ironsworn presumes a low fantasy, fairly gritty setting – basically “Logen Ninefingers’s chapters from The First Law trilogy”, which may or may not mean anything to anyone but me. Additionally, the game setup presumes world building to make a version of the Ironlands that is your very own, which is really great.

I’m not going to do that, though.

I have something specific in mind – a use for the game which seems to be okay with the game’s designer in terms of “other potential uses for this game”: using Ironsworn to run a fantasy game/setting/scenario I already have readily available. 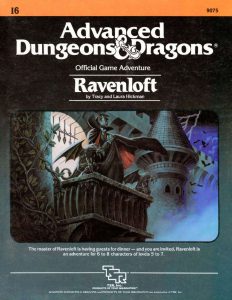 In short, I’m going to play a solo game of the original Ravenloft – I6 AD&D module, augmented with some PBtA style tweaks from a World of Dungeons version of the scenario I ran for awhile with my daughter.

Well, in a standard Ironsworn game, you’d either start character creation or world building, and then move on to… whichever of the two you didn’t do first. (The podcast AP from the creator starts with worldbuilding, then does the characters second, for example). The steps look like this:

Mostly, the part I’m not going to especially worry about is creating the world, because I have one readily to hand in the form of the (implied) setting for Ravenloft. I’m going to do a BIT of world building, to sync the setting to Ironsworn’s assumptions (lower/subtler magic than DnD, etc), but that’s about it. Let’s start with that and then move on to our hero.

There are several sections that the game says we can make decisions about:

Again, I’m not making decisions about all these things, though most of the questions WILL be answered by virtue of using the Ravenloft module as the baseline setting for our adventure. Let’s go.

The first question is about “the old world” that Ironlanders are assumed to have left behind for the Ironlands. I’m discarding this, as it’s not relevant to the setting.

Iron. The next question also seems like one I’d toss in the bin. Basically “why are the Ironlands called the Ironlands?”, but I like the second option we can choose from, so I’m making a note of it anyway.

The weather is bleak. Rain and wind sweep in from the ocean. The winters are long and bitter. Someone complained, “Only those made of iron dare live in this foul place”

That just fits. Absent any other plot, I could take that, plop my hero down on the Barovia map with the related Ironsworn quest starter, and I could go. Nice.

I’m discarding the Legacies question (what lived here before us?) as not especially relevant to my needs.

What are the Communities like? A good question, and I’m going with the first available option:

We are few in number in this accursed land. Most rarely have contact with anyone outside our own small steading or village, and strangers are viewed with deep suspicion.

That suits the look and feel I’m going for right down to the ground.

Leadership is as varied as the people. Some communities are governed by the head of a powerful family. Or, they have a council of elders who make decisions and settle disputes. In others, the priests hold sway. For some, it is duels in the circle that decide.

For Barovia, the answer is both in keeping with this answer and… something else.

How do we defend ourselves?

This is an interesting one. I was initially going to go with: Supplies are too precious and the lands are too sparsely populated to support organized fighting forces. When a community is threatened, the people stand together to protect their own.

But another answer lets me integrate my character concept in much more smoothly, once some of the edges have been sanded.

There are wardens are act as soldiers, guards, and militia. They serve their communities by standing sentry, patrolling surrounding lands, and organizing defenses in times of crisis. Most have strong ties to their community. Others, called free wardens, are wanderers who hire on to serve a community or protect caravans.

This is a really good starting place, though I might tweak the answer a bit in character generation, as we learn about our hero – but basically, I’ll call her a freewarden, and a young member of the order. It works.

Mysticism? Magic is rare and dangerous, but those few who wield the power are truly gifted.

Religion? The people honor old gods and new. In this harsh land, a prayer is a simple but powerful comfort.

There’s a question about the Firstborn – elves and giants, basically, but it’s not especially relevant to this game, so I’m setting it aside. I’m homing in on a pretty human-centric setting, but with beasts and monsters aplenty.

Speaking of: Beasts – which is to say, non-sentient monsters and the like.

Monstrous beasts stalk the wild areas of the world. (To which I’ll add “and the wild areas are cheek and jowl with what’s loosely termed ‘civilization.’“)

Horrors – the monsters you can have a conversation with, sometimes.

For the world in general, this:

We are wary of dark forests and deep waterways, for monsters lurk in those places. In the depths of the long-night, when all is wreathed in darkness, only fools venture beyond their homes.

The dead do not rest in these lands. At night we light torches, scatter salt, and post sentries at the gate. It is not enough. They are coming.

Okay! That’s the world stuff answered. Next post: moving on to character generation.