Ismark leads us down the street, past Mad Mary’s to E4, which is the Burgomaster’s home. 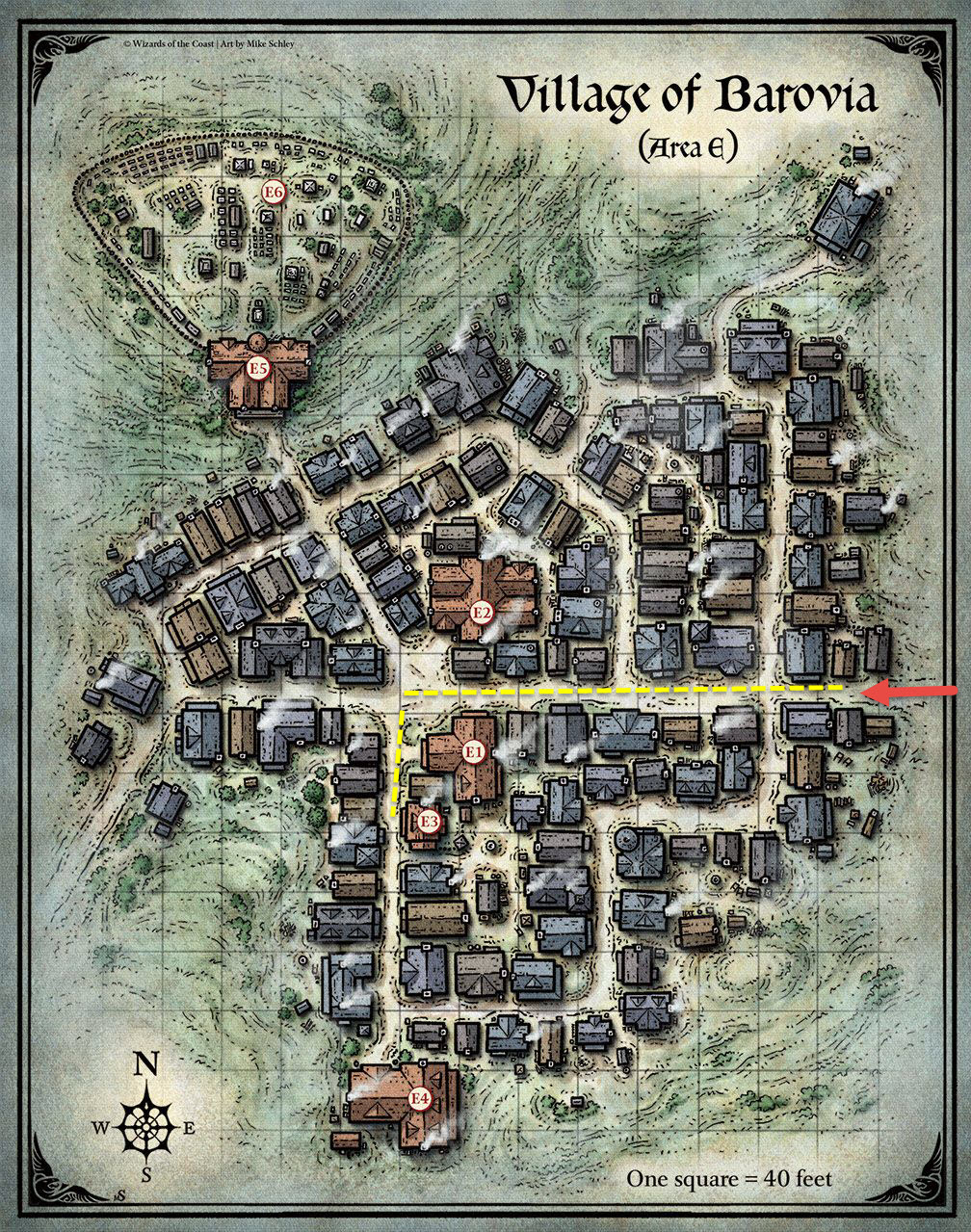 A weary-looking mansion squats behind a rusting fence. The gates are twisted and torn. The right gate lies cast aside while the left swings crazily in the wind. The stuttering squeal and clang of the gate repeats over and over and over…

Weeds choke the grounds and press in on the house itself, but against the walls the growth has been trodden under to form a path all about the place. Heavy claw marks have stripped the finish. Great black blotches tell of the fires that have assailed the walls. Not a pane nor shard of glass stands in any window. All the windows are barred with heavy planking, each plank marked with stains and gouges.

It’s obvious Ireena only lets me in because Ismark is with me, and vouches for me, and even then only because I apparently came at their father’s request.

The interior of the house is well furnished, although the fixtures show signs of considerable wear. Obvious oddities are the boarded-up windows and the overuse of holy symbols in every room. The Burgomaster’s body is in one of the sitting rooms — on display as if for a wake that never happened. His body has not been preserved in any way, and it’s been 10 days, so despite the candles burning in his honor, the smell in the house is quite horrible.

Ireena and Ismark barely seem to notice, so I don’t comment on it.

A bit of time passes….

It’s already the third time I’ve assured Ireena I’m here to help, but her reluctance or outright disbelief is starting to get to me.

“Sister, this farwarden tapped iron and swore to free Barovia!” Ismark exclaims. “Let her help us!”

[I’m trying to Secure an Advantage and build up some momentum.] 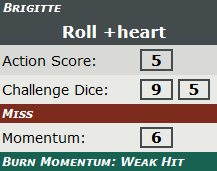 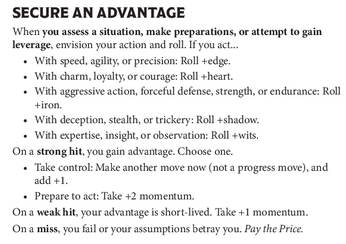 Ugh. Okay, that’s… not great. Either a miss, or I have to burn all my momentum for a weak hit. Basically the opposite of what I’m looking for. If I burn momentum to get a weak hit, I’ll be down from 6 momentum to 3. Bleh. Otherwise, I either fail or “your assumptions betray you”, and in either case I pay the price. Hmm. Give me a second so I can think about what my assumptions are. 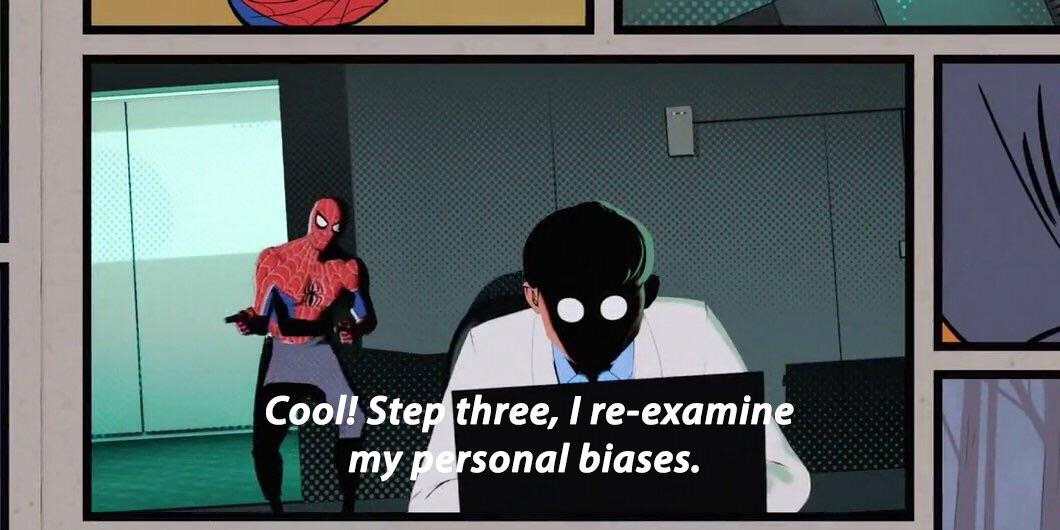 Hmm. So either I fail (to secure an advantage – getting Ireena on my side like Ismark is) or my assumptions betray me, and in either case, Pay the Price. Or… kill my Momentum to get a weak hit, but still a hit.

Pay the Price, if I go that route, would be…

Hmm. Okay, for that I’d go to the “Oracle” of the module and check the random encounter table for “Barovia Daytime”, in order to complicate things.

You know what? Fine. Let’s see where this goes. There’s an angry hammering on the front door of house. Ismark and Ireena tense. I keep my hand free from my weapons, but the hand holding my shield tightens where no one can see, and I move to the door.

Who is it? Oracle says… 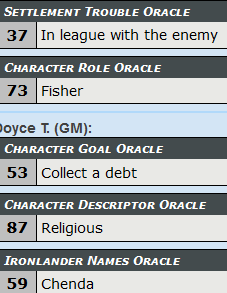 That’s… a lot to unpack.

“Come out of there, Ismark!” shouts a deep but somehow reedy voice. “Bring that foreign bitch with -”

I open the door fast enough that he cuts off what he’s saying. His eyes widen, he takes a step back, but then his expression pinches down and the grip on a nasty little fisherman’s knife tightens.

“Chenda?” Ismark says, stepping up on my right. “What in four hells are you doing here?”

“I heard about that blasphemy and treason at the tavern – you and your little -” he shoots a look me sidelong and chooses better words. “foreigner, too far in your cups, saying things you ought not, and her making promises she can’t keep, and be hanged if she tries.”

“Hanged? Treason?” Ismark snorts. “Wishing the monster Strahd dead isn’t treason, Chenda, and blasphemy? Are you entirely out of your mind?”

“The Baron is the Land, the Land is the People, the People are the Blood,” says Chenda, and it has the rhythm of a prayer to it. Something memorized. Something believed without thinking about it.

I step forward, through the door, and man takes another step back, scowling. “Your ‘baron’ is sucking the blood out of this land, fisherman. Literally, I think. How much can you lose before dying?”

[I’m looking to Compel this guy to back down, but while it might be nice for me to go in with +heart, I don’t think that’s how it’s going down. I’ve been binging the Witcher too much…] 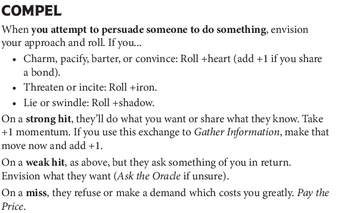 Okay, weak hit on a threaten, but that’s fine because I’m not being especially threatening. (And maybe this was a heart-based convince, but whatever – the result would have been the same either way. So.)

The move says they ask for something in return. I already rolled “Collect a Debt” on character goals, but I’m really not sure what that is.

[Meanwhile, I’m scrolling through the oracles idly, while thinking, and I spot “your actions benefit the enemy’, and the first batch of oracles on old Chendra says something about ‘in league with the enemy.’ Okaaaay. Yes.]

The man’s eyes narrow. “You speak like one who knows and fights evil. And you claim to be a farwarden, but I don’t know from a scarecrow, and the last farwarden that came through here promised much and then ran off. Tell me who you are, girl. Who exactly – by what right do you interfere?”

[Basically he’s demanding my bonafides, which we know from the oracles he’s going to jog off and report to who’s knows who. It’ll eventually get to Strahd, who’ll know that much more about me. Awesome.]

Brigitte glares at him, then lets out a sound that’s somewhere between a sigh and a grunt.

“I am Brigitte Lindholm, youngest daughter of Torbjörn and Ingrid Lindholm. I’ve been a farwarden proper for three years, and before that I squired under Reinhardt Wilhelm, one of the greatest knights of the order, and my godfather. Traveling alongside him was the greatest honor of my life.”

She sighs, and it’s a proper sigh this time. “I craft armor in my spare time, horse hair makes me sneeze sometimes, and my favorite food is semla. Is that quite enough?”

Before the man can answer, Ireena steps forward, her arms wrapped tightly around her waist. “It is enough, farwarden. Thank you. Chenda…” Her said eyes come up to meet the angry fisherman’s, and he looks away first. “Your behavior embarasses this village. Go away.”

He opens his mouth to reply, but she is already walking back into the house, and I and Ismark follow, closing the door in the man’s face.

Strictly reading the text of the move, I still secure an advantage, I think, because of the choices I picked. Let’s review:

“On a miss, you fail or your assumptions betray you. Pay the Price.”

Okay, cool. My assumptions betrayed me and I pay the price. My betrayed assumption is “the villagers are all on my side, and the Pay the price is

… which is Chenda reporting back on everything he learned about me. Sweet.

However, I don’t get the momentum I’d get from either a strong or weak hit. I just secure an advantage in the narrative, which I’m fine with: that result is why I had Ireena come to my aid at the end of the exchange with Chenda – she’s on my side now. Not enough to form a bond with, but enough to be “NPC generally on my side.” Cool.

Also, since I have a bit of Oracle-level knowledge about what Strahd is generally up to, I’m going to say “getting Ireena a bit on my side” counts as a single tick in a single box on my epic quest to kick Strahd in his pointy teeth.

Given that, I actually will Gather Information.

“Thanks for the help out there,” I say, trying a smile. “I feel like I’m swimming in dark water with very, very large fish bumping my ankles. Can you help me understand what’s going on here?” 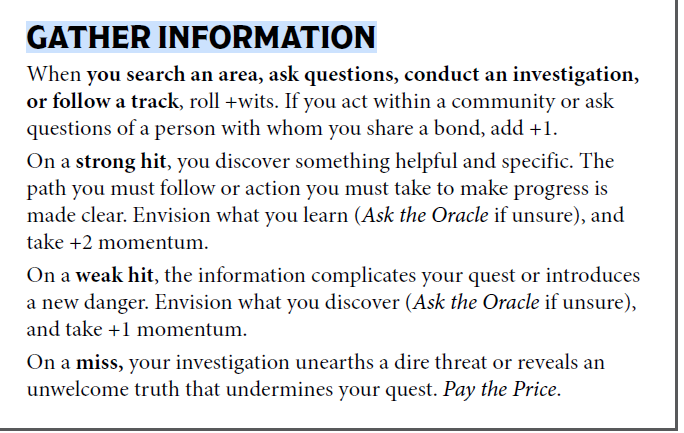 Well okay! I’m going to infodump on Brig (and mark +2 momentum!), because I don’t feel like writing everything out as dialogue. Here we go.

Ireena looks at me. “What do YOU think? What should be done?”

“If you’re going to the castle,” Ismark says. “I’m going with you. We’re doomed here, but I’d spit in that monster’s face and try to drive a stake in his heart, if I can.”

I frown, still thinking. “Are you sure?”

Irena thinks, and nods, her mouth a firm line. “if it’s what you decide to do, after talking to the priest, then yes.”

“All right,” I say, “grab what you need.” I turn to Ismark as Ireena leaves. “Help me with your father.”

“I want to talk with your priest,” I say, “and the Burgomaster needs a proper burial.”