Okay, we’re heading to the northwest part of the village, E5 and E6, the church and cemetery. Sounds peaceful. 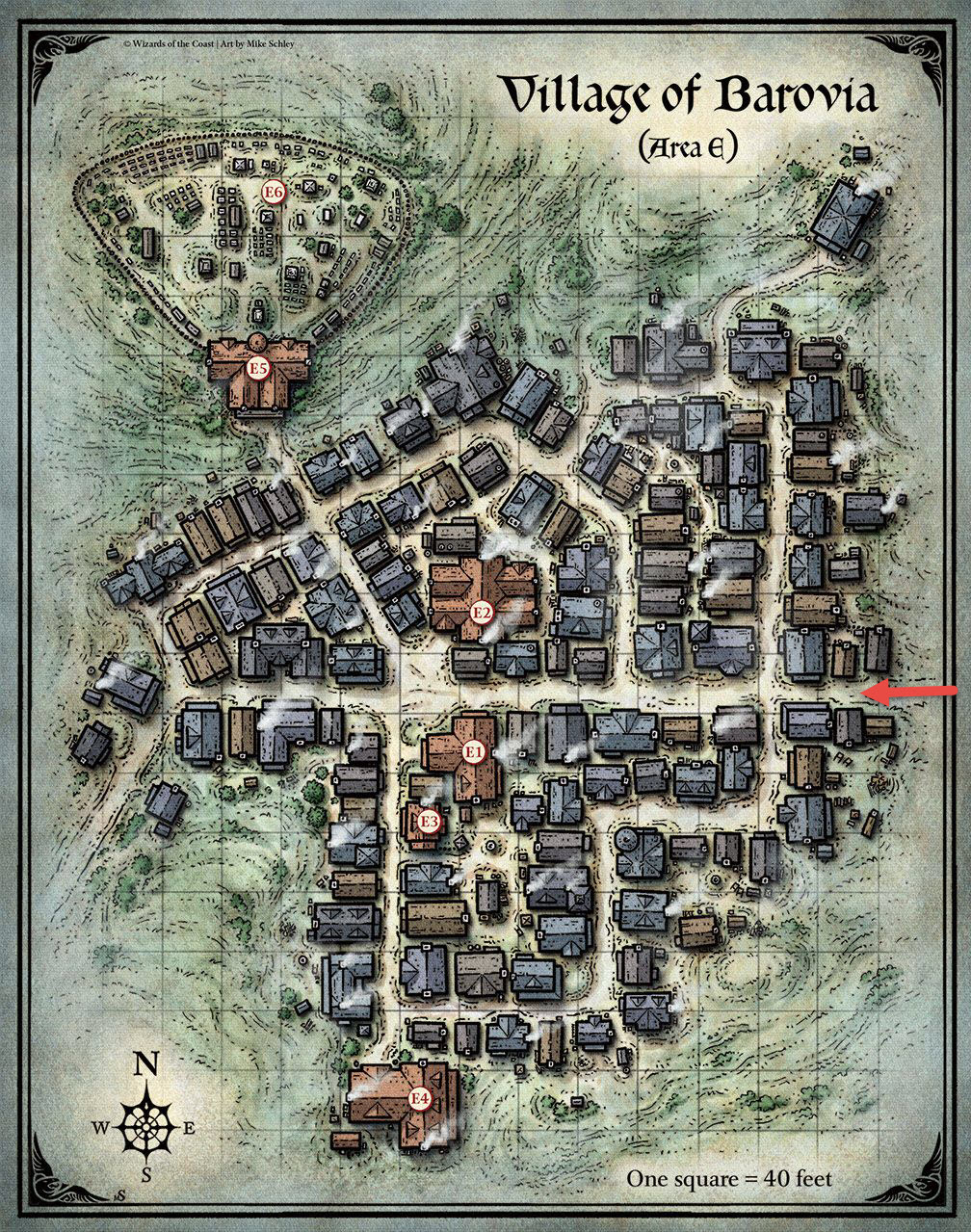 Now, not to be too much of a gamer about it, but the thing is, I’m pretty sure the only way to get XP in the game is to make and complete Vows. “Free all of Barovia from Strahd” is epic and all, but it’s not going to be meat on the table any time soon, if ever. I need to keep doing small things – side quests, if you like.

So: a troublesome vow to bury the Burgomaster. On the one hand “har har, you have to carry him allll the way across town, what a big tough adventurer you are”, but on the other, the job is exactly as tough as I choose to make it – I can elide through pretty much everything else that happens in town and just get to the road up to the castle in about a paragraph, but I don’t learn or gain anything from that, so why not have some fun with this stuff?

Anyway, I swear the vow:

Which is good. My goal is clear. No complications like “we can’t bury him here – it’s not hallowed ground anymore!” or whatever. And hey: +2 momentum brings me to the max of 10, so wooot.

I see myself and Ismark walking slowly up the street toward the church, at either end of a bier. Ireena flanks us, pensive but resolved. 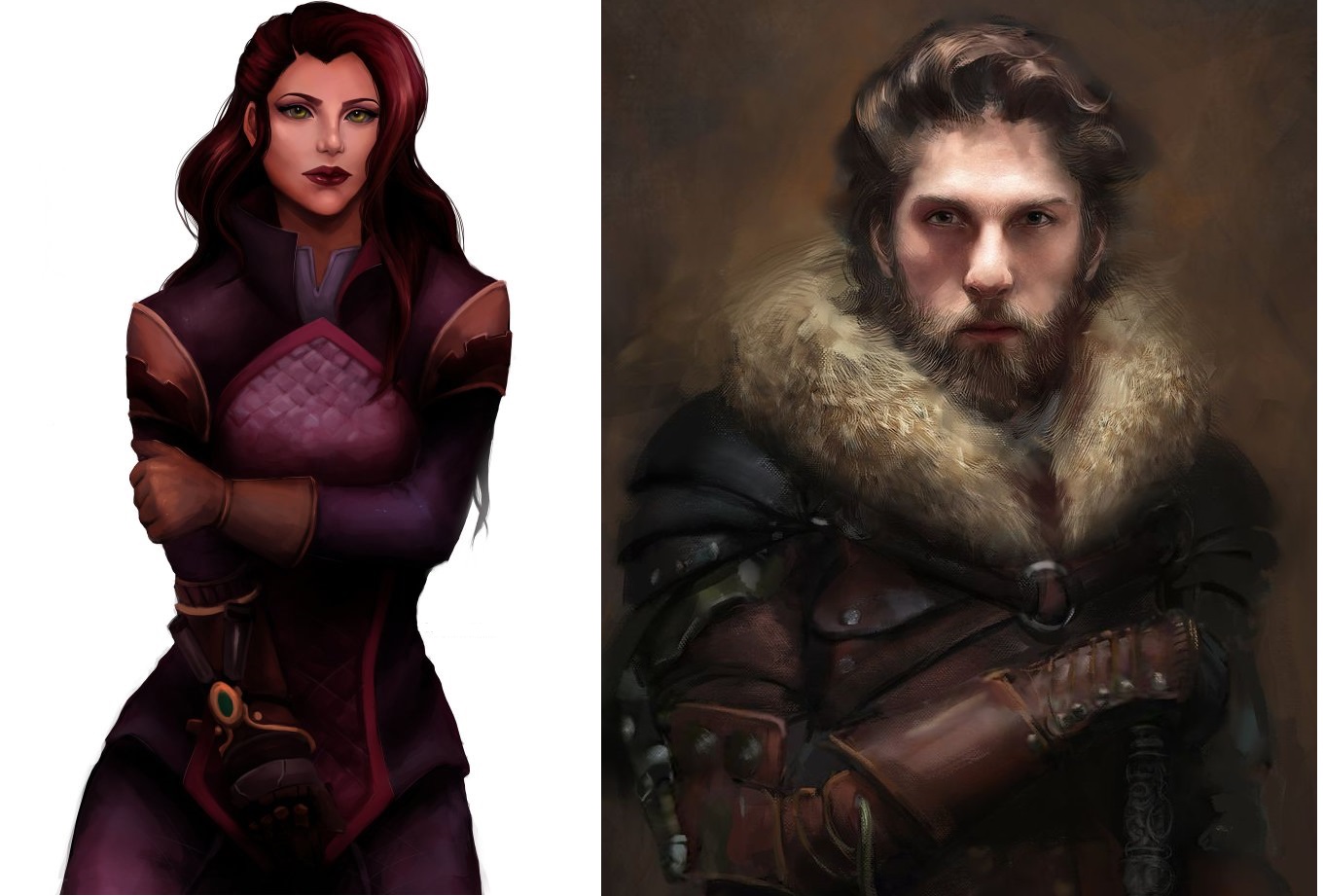 Since this is actually attached to a vow, I need to make some kind of progress here, and that means challenges. The first thing I imagine is the possibility of more interference from the village – either more superstitious, angry villagers (they wouldn’t help bury their Burgomaster in the first place, maybe they don’t want to see him buried at all, for fear it will make Strahd angry), maybe some vistani, or even something worse. We’ll see.

To reflect that, I’ll Face Danger (Ironsworn’s catch-all move for “I’m doing something generally risky for which there isn’t a better move) using Heart (loyalty, courage) as we carry the dead man through town in front of pretty much everyone.

I’m feeling pretty good about this – the challenge was strong, but I overcame. (I’ve been pondering moving Brigitte’s stats to the “challenging” stat array (4,3,3,2,2), as some folks have suggested, but so far this session the dice are making me feel silly for worrying about it.

I mark three boxes on the vow, but other than that, benefits to me are kind of slim, since I could get 1 more momentum, but I’m maxed out.

Atop a slight rise stands a gray, sagging edifice of stone and wood. This church has weathered the assaults of evil for centuries on end and is worn and weary. The bell tower hangs to one side, its strident call long silenced. Flickering light shines through holes burned through the roof shingles. The rafters strain to maintain their burden.

The church interior is a shambles, with overturned and broken benches littering the floor. At a claw-scarred altar toward the far end is the priest. 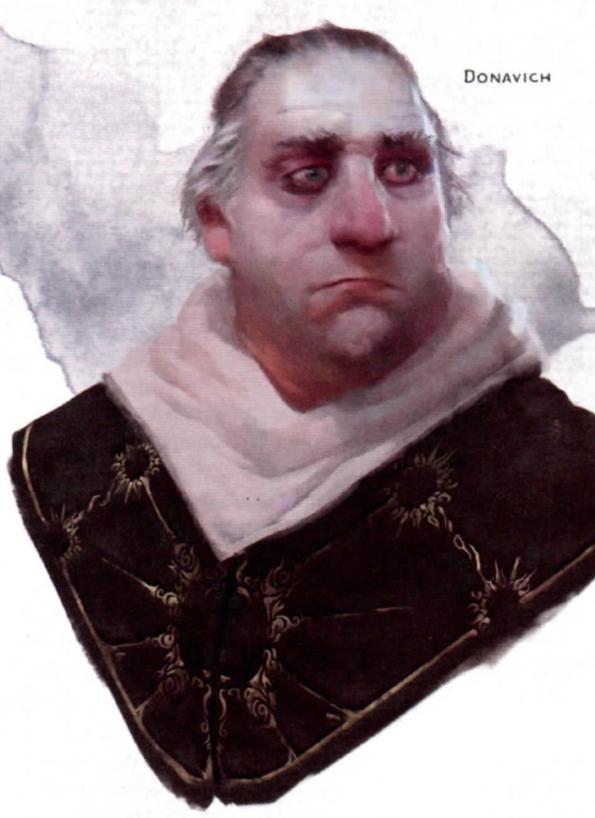 Donavich has apparently been praying and chanting throughout the night for weeks. He spends each night, every night, warding off evil from his church, and has fallen asleep against the altar.

So I need some information from this guy on several topics. I’m going to Gather Information (+1 for the community Bond) and play from there: 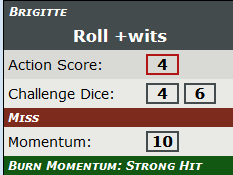 Oy. Okay, my dice are mayyyybe saying I should change my stat array. Whatever. I don’t want to snag the story at this point on this guy, so I’m going to burn my momentum to get a strong hit instead of a miss.

This works for me, since I imagine him not being too enthused about our plans – it takes a lot of energy to convince him to help us out at all and, thus, be involved. Cool.

When woken, introductions made (his voice is hoarse and weak), our intentions explained, and our will convincingly conveyed (until he finally stops trying to talk us out of “this madness”) he shares the following…

It’s possible the book of history he mentioned will explain such things – he seems a bit fixated on the idea of the thing.

Probably the thing he’s least enthused about, except for the “storm the monster’s castle” thing, is burying the Burgomaster while night is coming on. I’m going to try a fairly gentle compel, with Heart… 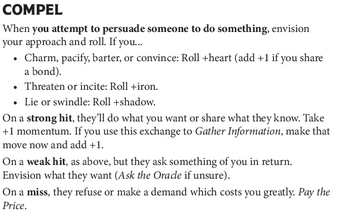 “The moon is rising soon!” he says.

He eyes the door leading to the churchyard, shaking his head fretfully, his hands trembling.

I lay a hand on his shoulder, relenting. “Don’t trouble yourself about this, Brother Donavich,” I murmur. “I know the words to say, well enough, and I’m sure Ireena and Ismark know the way to the family plot. Have you proper tools for the task? I’ve only a camp shovel…”

Maybe it’s the idea I’m letting him shirk his duty to the village. Maybe it’s asking for the tools. Maybe it’s just the pity in my eyes, but the firmness comes back into his eyes and jaw. “No. I mean, yes, they’re in the caretaker’s shed, but no… I’ll come with you. Let me get my things. Let it be done correctly and well and bravely, for a brave man.”

I’m going calling that another milestone on a troublesome vow.

Finally, and quite simply, I’m going to Face Danger (with “strength and endurance, so +iron) while digging the grave and putting the Burgomaster to rest. The day is passing, the moon is rising, and Things Might Happen, so let’s see how it goes.

Okay, a weak hit, “Face a troublesome cost.” Choose one.

Fine. I’m going to go with Enduring Stress (-1). My following Endure Stress roll is another weak hit, which effectively does nothing. I “soldier on.” Here’s what happened to cause the stress:

As we conclude the burial ceremony, I see something terrible and unexpected. The moon has risen, and its light catches faint outlines of people — an assemblage fading in and out of view at the gates of the graveyard. They seem to be… Waiting. Either calmly, or resigned.

Donavich sees the direction of my stare, though he does not look himself. “They do this every night,” murmurs the priest. “Almost a hundred souls. They assemble, then, at midnight, walk the road that leads to the castle.”

“That is terrible,” I mumble.

But what is more terrible – I recognize one of them.