“But first, I believe formal introductions are in order.”

The statement hangs in the air for more than a few moments, bringing silence to the booth at the late-night public house.

I held up a Fate point. “I will give this to you if you now finish the sentence: ‘I think I was…'”

“I think I was…” says Victor, “someone in Her Majesty’s service.”

“Ah,” replies [Kim]. “I’m pleased to make your acquaintance. I’m Ophelia Stevens.” (A name Victor seems to associate with the scandalsheet-populating hijinx of the youthful nobility.)

“Just call me Red,” says Red, and turns to their large companion.

“Barnaby Cornelius Crispin,” he murmurs. Seems he’s got a name that matches his stature.

Once introductions are done and everyone basically shares what they are willing to share. From there, they decide to check out the boarding house for which they have a key.

Situated just south of Eden Park at the northern tip of Merchant’s Gate, the Cassius is an old and respected boarding house fallen upon hard times.

The building itself is a three-story affair with a common room, six guest rooms, and indoor plumbing.

One of the rooms here was apparently rented out by Jack Smith.

A Gun
A small, snub-nosed revolver sits on top of a dresser, next to a few playing cards. It’s not loaded. It doesn’t match the holster that Smith was wearing. 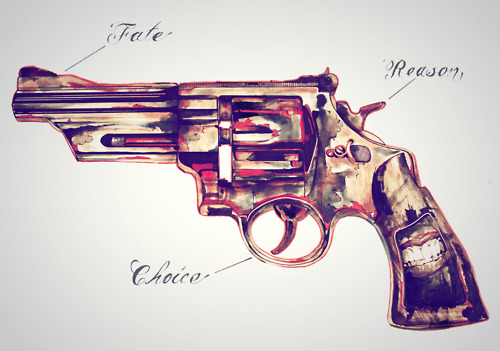 Literature
There is a flyer for the Society of Free Thought on a small table, just like the one at Smith’s house, except this one is covered with scribbles from Smith. 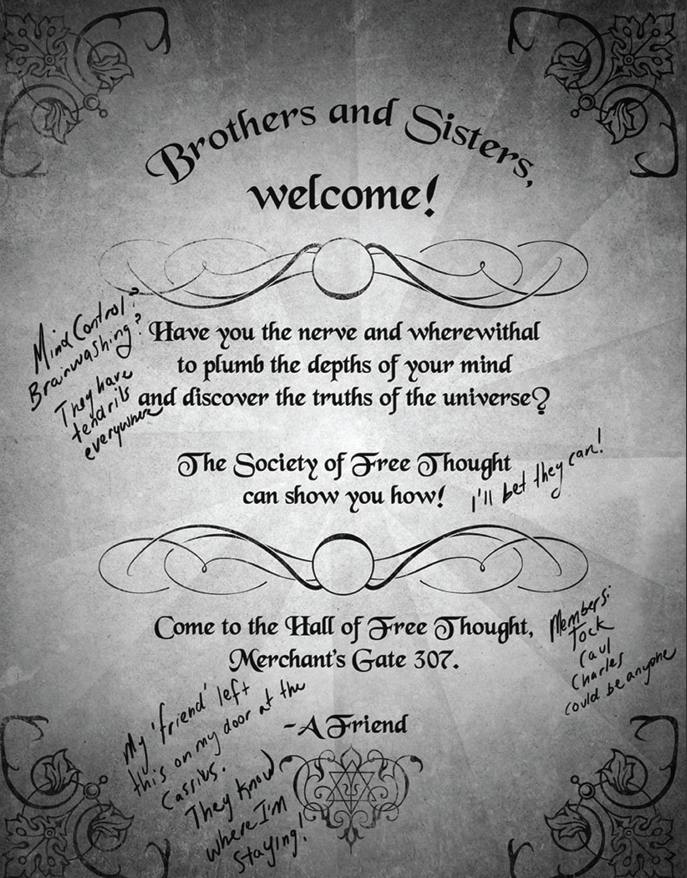 Photographs
Also on the table with the Society flyer is small a collection of photographs. One photograph is a picture of a symbol carved in stone above a door: an eye in a circle (the same symbol as the one carved in the handle of the supposed murder weapon). 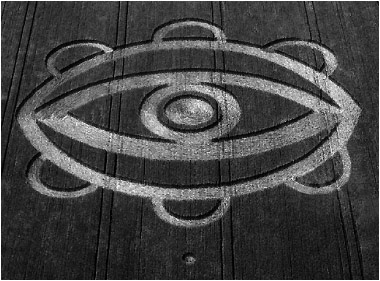 The other three seem to be surveillance-style photographs of two men meeting.

Off to the Cherub

Once the group feels as though they have found everything there is to find, they get out of the boarding house and head (at Barnaby’s request) to the Cherub, where he remembers being fairly often. Turns out the Cherub is a fairly nice place… where not-nice things are arranged for. Barnaby has the other three taken to a private room, and meets up with a petite blonde woman named Cassiel, who is the Cherub’s ‘fixer’ – someone who sets up wealthy patrons with just the right person for an unseemly job. She’s also ostensibly the sous chef. Life is funny that way.

Cassiel knows Barnaby and seems to have a bit of a thing for him, and is quite willing to help him out with his questions. She recognizes the younger man in the photos – some politician nicknamed “Velvet” – though she only knows that the older guy in the suit and robe is one of the more prominent members of the Society of Conscious Thought, though she can’t say what his name is.

Barnaby gets a few more questions answered and arranges to make contact with Cassiel later, then gathers up everyone else and heads toward the Society of Conscious Thought, with a brief stop to pick up some ammunition for Victor’s recently acquired handgun.

As befits the hall of an ostensibly secret society, the Hall of Free Thought looks small and unassuming from the outside, with only the Society’s symbol (an eye in a circle) outwardly marking it.

No doorman guards the door, though there is a desk with a receptionist of sorts just inside the door, in the foyer.

The inside of the Hall is considerably more opulent than the outside. As much of the Hall is underground, it is a much larger building than it seems to be from the outside. The Hall contains a vast common room furnished with couches, chairs, tables, and a bar. This is where members of the Society gather to see and be seen, and to engage in stimulating conversation. The occasional card game is played here, though high-stakes gambling is strictly prohibited within the Hall.

The four, escorted in by Carolyn, immediately notice the large portrait prominently displayed in the main room, obviously the robed gentleman from the surveillance photos. Carolyn informs them that is “The Beneficient One” – head of the Society.

The Beneficent One is around, but probably will not be out in the common area tonight, explains Carolyn. Mr. Tock, another senior member, will very likely be out soon, following a meeting, however.

The four basically kill time for a bit, with Mr. Crispin casing the place, Victor sitting down with the younger men playing at cards, Ophelia poking through the bookshelves, and Red getting a drink from the bartender and the other end of the room.

Victor’s learns from the junior members playing poker that only a few rooms past the common room are open to members of their level, with private rooms available to those that live in the House, and even more secure chambers reserved for the senior members who run the Society, such as Mr. Tock and The Beneficent One.

Ophelia spots all of the “six books” she saw at Jack Smith’s house, but not repeated in any suspicous manner. She also spots (and secures) two pages of a rather odd little test, apparently left behind on a small side table.

Mr. Crispin verifies that all the doors out of the common room are locked.

Red is having a frustrating conversation with the barman, who is on his guard and not likely to chat with a patron of the Society, or share secrets about his employers.

An odd thing happens as Barnaby comes over to check in on Red.

First, Red tries to convince him that he really does want to help her and, in the same way she likes to take apart the mechanisms of things they’ve been finding, it seems as though she actually does that – take the man’s head apart a bit and put it together in a way that’s more suitable to her needs.

Ophelia and Victor notice … something… when this happens, and both turn toward the bar, just as a door into the room opens and a well-dressed man steps through.

Good evening, he says, smiling at Ophelia. “I am Mr. Tock. I hope I can help you.”

And that’s where things ended. Next session: Tonight!