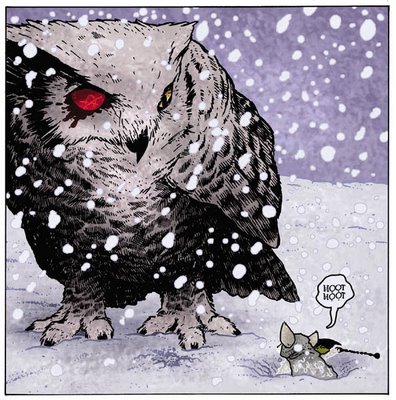 ((The title of this session is a tongue-in-cheek tribute to the finest, most awesome line in the new Mouse Guard collection, Winter 1152.))

A player couldn’t make our ongoing PTA season this week, so the remaining players and I opted to do a one-shot with Mouse Guard.

Since chargen takes quite a bit of time for new folks, I ran the whole thing as a series of questions in a (55 reply!) email thread. Here’s what they came up with:

Prep was pretty simple: I used the Mission Burner method that someone posted on Story Games, and came up with the following:

PICK A SETTLEMENT
– Pick a settlement one or more of the patrol members are from or have history with: DAWNROCK

(Jerrick is from there, and Yarrow had a friend there – a loremouse named Siaran.)

IN THE PAST
– Weather messed something up there.

(Specifically, Spring snowmelt and rain caused a mudslide that snapped the wheel off the town’s only Mill.)

IN THE PRESENT (YOUR MISSION)
– Important mice or supplies must be accompanied to the settlement.

(Carpentry tools and a Carpenter (Faolan’s old Carpentry artisan to whom he was apprenticed: Sable.))

– Wild animals are creating difficulties for the settlement.

(The possibility exists that creatures emerging from winter hibernation might pose a problem to repairing the Mill — I’m thinking, since we’re on a “mud” theme: Bullfrog.)

IN THE FUTURE
– The difficulties will experience an unexpected twist

The Mission: “This ends in Mud”

Escort Sable (carpenter who once apprenticed Faolan) to Dawnrock with supplies, then help that settlement repair their mudslide-damaged Mill.

1. Get to Dawnrock. Pathfinder Test: Ob6 (Spring).
— ((Conditions Failure: Main person is Tired, helpers are Hungry and Thirsty.)) *OR*
— ((Twist Failure: Mice are on the wrong side of a broad, swampy area that’s become nigh impassable in the Spring Thaw. Ob5 Boatcrafter or Ob8 Survivalist — Failure conditions on this are Tired (lead mouse) or Hungry & Thirsty))

2. Repair the Mill (Complex test – must perform 3)
Scientist Ob5 (Design new wheel); Laborer and/or Health Ob3 (clearing mud and damaged bits – hauling supplies); Carpenter Ob 6; Healer (to help Sable recover from the wet and muddy trip – he’s Sick).
— ((Twist Failure: A bullfrog emerges from his muddy winter hibernation where the Laborer mice are clearing, and decides to have one of them as a snack. Bullfrog Nature 5: Leaping, Croaking, Camouflage, Predator))

How it Played Out

((None of the players have played MG before. Jerrick has read Burning Wheel. The other two players have read Fall 1152. That’s it. Avante!))

After a brief overview of how the system basically worked, we jumped in.

The scene opened with mud. Snow melt, last night’s rain… whatever the reason, the courtyard in Lockhaven was muddy.

Standing in that mud, staring at a cart (like the one the grain merchant was hauling in Fall 1152) loaded to the brim with carpentry supplies and tools, are Faolan and Yarrow.

Cut to: Jerrick, in Gwendolyn’s study. The matriarch is explaining that, while this isn’t a particularly glamorous assignment, it’s very important; the water wheel on Dawnrock’s only mill was snapped off in a mudslide — although they have many skilled stone masons, the town has no carpenter to speak of; Lockhaven has arranged to provide both carpentry supplies and a skilled carpenter — in exchange, Dawnrock will send down several wagonloads of milled grain in the fall.

Gwen’s captains suggested Jerrick be sent, as he’s from Dawnrock and knows the area.

Cut back to the courtyard, where a stooped oldfur toddles up to the guardmouse and tenderpaw.

“Oy! Give an old mouse a hand up onta that cart!”

“Aye! I be a deputy guard mouse, now, boy! Time to test alla that training I wasted on you!”

“Get. Down.” Jerrick was not in the mood to humor the oldfur when he reached the courtyard. There were younger carpenters in Lockehaven, and he was at a loss as to way this old fool was being sent into the wilderness.

Much cussing ensued, and moaning about having to walk, but eventually Sable got down.

((Thing I forgot: both Jerrick and Faolan have Patrol Captain Harrow as an Enemy — Harrow is the guy behind assigning them to glorified carpentry duty, and the one who arranged for a crotchety oldfur to be sent along. I was GOING to have him show up just before they left to make sure they knew that, but I got so wrapped up messing around playing Sable, I forgot. 😛 ))

Jerrick, well-known as an expert pathfinder, turned to his newest patrol member. “All right, Yarrow — how about you find us a way to Dawnrock?”

The patrol heads… well, mostly north. Jerrick is stoically silent as Yarrow leads them, refraining from any comment more helpful than “are you sure?”

A long day ends with the group staring at the murky morass of a spring-swollen swamp. Dawnrock lies somewhere on the other side. Doubling back will add another day to the trip; possibly two. Continuing forward will require some kind of boat. Or… raft. or… something.

They decide to sleep on it.

The next morning, Faolan starts scrounging up bits of wood and vine to contruct a viable raft. Yarrow helps out by hauling the stuff (laborer), Jerrick ‘supervised’ with motivation-wise, and even Sable “helped”… by criticizing Faolan’s clearly atrophied carpentry skills.

((Boatcrafting. Ob5. Faolan has a 2. 3 helping dice from others, plus Scrounge-wise gave him six dice to roll. 3 success. GM uses a Conditions Twist.))

While the raft that Faolan finally got strapped together was enough to keep the cart (mostly) out of the water, the whole thing was terribly top-heavy and nowhere near big enough for the mice to ride (except for Sable, some of the time). Yarrow and Jerrick waded along on either side of the raft, chest-deep in the water, while Faolan pushed on the thing from the back.

The raft got hung up on tufts of grass repeatedly, and was generally a nightmare to move, but by late afternoon, they had cleared the swamp. Soaked to the bone, they’d had no time to eat — Yarrow and Jerrick were Hungry, but Faolan was too Angry to be hungry.

Oh, and old Sable is sneezing and sniffling and clearly Sick.

Back on “dry” land, they set out for Dawnrock and got there well after dark. It took some talking, but the town guard finally let them in, and let them stay in the guard house — no wandering around town for the strange guardmice, not without the See’s say-so, so Jerrick couldn’t even go stay at his family’s home — nor could Yarrow visit her friend.

The next morning, the guard were greeted by the leaders of the town and enthusiastically led out to the mill site to start on repairs. There was much to do.

First, they decided that Sable needed to be seen to. Jerrick went back into town to find a shop selling medicinal herbs and such.

((Resource test: Ob 4. Player was rolling about 7 or 8 dice, thanks to some help and being in his home town. Easy success, giving +1D to Yarrow’s next roll.))

With the supplies in hand, Yarrow set about making an eye-watering, head-clearing poultice for Sable.

((Healer test: Ob 3. Yarrow’s Healer is 2, plus the +1d for supplies, plus help from Faolan. She got two successes, spent a Fate point to blow up a 6, and got another success. Victory! Healthy old carpenter coot!))

With a revitalized (and aromatic) master carpenter dealing with building a new wheel, Yarrow started leading the laborers as they cleared mud and detritus from the wheel’s final location, and Faolan started cutting down a new axle for the wheel (something Sable figured Faolan could handle).

((Laborer, Ob3. Yarrow has 2. Helping from everyone, including ‘supervision’ from Jerricks motivation-wise (best trait EVER). Success.))

((Carpenter, Ob… 4? Something like that. Helping dice abound. Player gets 3 successes, two of which are sixes, but opts not to go for the win, wanting to see what will happen.))

Yarrow is covered pretty much head to toe in mud, ears drooping, when she hears “Y-Yarrow? is that… you?”

It’s her friend, the loremouse Siaran, native of Dawnrock, whom she was hoping to impress with her guard mouseliness (her Goal for this session).

He’s unfailingly impressed and enthusiastic about seeing her, however, and even volunteers to jump in and help with the clearing of mud. He rolls up his pant legs and sleeves, hops in, and starts shoveling with a passion only seen in over-enthusiastic scholars trying to show off.

His shovel bites into the mud and pokes a just-waking Bullfrog right on the nose.

The bullfrog is not amused. It croaks. Siaran croaks desperately back. It doesn’t seem to have much affect.

((CONFLICT! Bullfrog, Nature 5, vs. the patrol. Bullfrog Goal is “Eat Siaran.” Patrol goal is “drive off bullfrog, and keep it from ever coming back.”))

Disposition is rolled. I get 7. Players get 13! (Faolan spent a Fate point to blow up a bunch of sixes.)

Action 1: I script Attack. Players (Yarrow) script Defend (they’re new to scripting, but it worked out in their favor this time). Yarrow rolls her Nature to defend, and throws herself and Siaran down and out of the way of the whipping tongue (taxing her Nature).

I get four successes on five dice. Yarrow gets two, but they’re both sixes. She spends a Fate point, rolls the two new dice, and gets two more successes. Tie!

Action 2: I script Maneuver. Players (Jerrick, with a bow) scripts Maneuver. I get two success, and so do the players (which is a shame, cuz they were rolling a LOT of dice). We both get +2D to our next action…

Action 3: … which doesn’t matter for me, because I scripted Feint, and the Players (Faolan) scripted an all-out attack. I don’t get to roll at all, and Faolan got six success, then spent his last Fate point to blow up some sixes and finish off my last point of Disposition.

The bullfrog, shovel-smacked, bruised, and cut along its flank, flees the area. Awestruck locals cheer.

PLAYER TURN
Jerrick and Yarrow are Hungry and Thirsty, but this is Jerrick’s home town, so mom and pop fix them a nice meal, and that’s all taken care off with no Checks.

Jerrick, introduced to Yarrow’s friend, is very interested in the young mouse’s ability (unhelpful as it was) to speak Bullfrog, and spends a few days speaking of all things Loremouse. (Skill check on Loremouse. Two Success.)

Yarrow, chastised at her terrible pathfinding, gets up on the very highest parts of Dawnrock (which is atop a tall hill along the coast to boot) and takes many notes on the lay off the land she can see for miles and miles.
(Pathfinder beginner’s luck check: Success.)

Faolan’s time is spent more simply — at a pub, regaling the locals with retellings of the fight with the bullfrog, tossing back free (“medicinal”) beer, with cute young (“medicinal”) she-mice perched on his knee.
(Will check to recover from Angry: Success!)

A pretty fun time, even though we kind of forgot to set GOALS for the mission until very near the end. Bah. GM-failure.