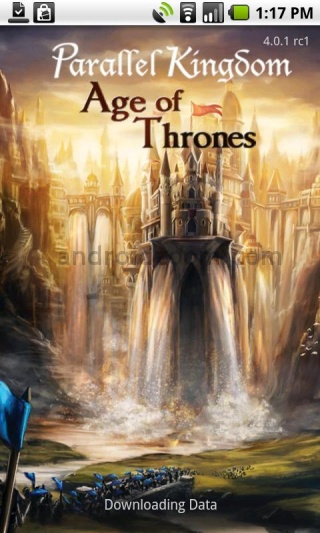 “I found a cool little game for the phone,” I told my wife on Friday.

“Yeah?” She replied. She’s a gamer and also has the same phone as I do, so these types of conversations aren’t that uncommon. “What’s that?”

“Parallel Kingdom,” I said. (Note: I don’t actually speak in hyperlinks – not yet.) “As near as I can tell, it’s kind of like FourSquare, except take out the constant spammy reporting of every restaurant you visit, and add in dragons and castle building.”

“Then how is it like FourSquare, aside from not sucking?”

“Well, it is based on where you are, and lets you kind of claim territory in ‘Starbucks Ambassador’ foursquare way, but you’re not claiming a real-world place, and the ‘claiming’ process involves the tried-and-trusted method of Killing Things and Taking Their Stuff.”

I nodded, trying to figure out how to explain something I’d only just started playing with and reading about. “See, it lays all the fantasy world stuff in over a GPS-synced Google Map of wherever you happen to be at the time,” I explained, “and builds landmarks in the game based somewhat on landmarks in the real world. Like…” I held up my phone and scrolled the Parallel Kingdom map a few blocks south of our house. “For instance, there’s a Grove – which I guess is a kind of dungeon – down in the park, and according to the help file on Groves, it’s there because there’s a park.”

She was not wrong.

Mash together a fantasy-themed ARG, MMO design goals, somewhat roguelike combat, GPS technology, and Google Maps, and you get Parallel Kingdom — in short, you get a game I’ve wished existed ever since I got a smartphone (and which actually has existed for a couple years; I just didn’t know about it). Basically, Parallel Kingdoms lays a fantasy world right on top of the real world that you’re walking through right now. You get to collect items and claim territories, as well as exploring the world around you.

I spent a remarkable amount of time this weekend learning the ins-and-outs of the basic game and laying claim to a small amount of territory in my real-world neighborhood — no small feat, considering how heavily played the game is and how long some of my closest neighbors have been active in the game. In all, I found the play to fairly intuitive and the interface to be charming if not exactly awash in eye-popping graphics.

But most of all, the game was just… fun. Granted, some of that fun comes from hunting down local land barons whose players haven’t been logged in and taking proper care of their holdings, then claiming their lands as my own, but dang it: fun is fun.

The location-based aspect of gameplay is definitely the most compelling part of Parallel Kingdom. I don’t know of any other game out there that uses your actual location to map your character’s location, then lets you kill monsters and tear off a piece of the game world for yourself. (Certainly not one that’s available on both Droid and iPhone platforms.)

And let’s talk about the game world. You think Azeroth is big? Parallel Kingdom’s map is the entire globe (the game is available globally and playable anywhere you can get a GPS signal).

That global playerbase makes for a strong MMO environment as well — the game runs dozens of live chat channels including Help, Global Chat, and language-specific chats, all the way down to chat channels specific to the map you’re currently on, the Kingdom you’re a member of, or the city closest to you. You can also connect with friends around the world, so if you know someone in Australia, Japan, or Alaska, he or she can come and visit you with the push of a button, allowing you to play together, as a group.

I also want to mention how much I like the fact that game encourages me to get out of my house. Yes, I can hop from friendly territory to friendly territory and travel a pretty good distance in-game from the comfort of my armchair, but the easiest way to reach an area of the map that seems unassailable within the game itself is to simply go there, physically. My wife and son and I spent a fun and rather amusing hour on Sunday, running errands around town and chatting while I raided mines, burned down abandoned territory flags, and claimed new lands as my own (she was doing the driving, obviously). I’d like to personally thank PK for letting me un-ironically state that I had fun while out running errands; it makes the game worth it for me, right there. For that matter, I’m really looking forward to exploring a few heavily-defended areas on my bike, once the local weather stabilizes, and the simple fact that this game has me excited to go on a thirty mile bike tour is remarkable.

Finally (although it’s less of an ‘oh wow’ point), the skills system, equipment and inventory, crafting and building mechanics are all solid. There’s nothing in there that blows your mind with ingenuity, but neither is there anything that leaves you scratching your head, wondering what the designers were thinking.

In a word (well, two words): battery life. PK puts your phone to the test, hitting the GPS, wireless, and 3G networks nigh constantly, if not constantly — in short, it’s going to wear your battery out a bit faster than Angry Birds, which is saying something.

Don’t get me wrong: there’s a ton of stuff to do in PK — having staked out a pretty good swath of territory over the weekend and built a crude house, I’m now contemplating either fortifying my existing holdings or building a proper compound up in the nearby Rocky Mountains where there is considerably less competition for land and resources (albeit fewer Roc Nests, which are usually located near our real-world airports).

The game is complete as-is, and everything I’ve read about proposed future additions to the game strike me as fun, but not ‘must have, right now’, so let’s not worry about mundane wishlists like private voicechat with your online friends — let’s shoot for real bleeding-edge stuff that probably won’t even be possible for five years — wouldn’t it be insanely cool if my phone’s camera could interface with the game, so that I could pan it around while out walking with my family and see in-game buildings or nearby creatures as 3d models superimposed on the screen?

Yes, yes it would.

But that’s for the future. In the present, Parallel Kingdoms provides an engaging play experience on your gps-enabled smartphone, and adds a fun layer of pixelated fantasy to the world around you. If you have the means (and the phone), I highly recommend checking it out.