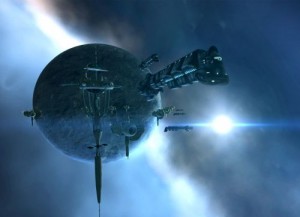 The most striking thing about EVE Online is the way in which the game is not like its digital brethren. Unique can be a good thing: when you’re sick to death of the same-old-same-old, something that works completely differently can be a real breath of fresh air. It can also be a bad thing: sometimes, the reason that everyone solves a design problem the same way is simply because it’s actually the best way to solve the problem. “Unique” is a risky balancing act — when you get it right, it can set you far above your competition — get it wrong and you’ve set yourself up for mockery and painful failure.

Say what you will about EVE, it’s definitely not a game that’s ever been afraid of being different from everyone else. Sometimes that works out well, and sometimes it makes players want to kick innocent puppies to relieve their frustration. Today, in the /diff files, I’m going to take a look at EVE’s version of the MMO-ubiquitous “quest” mechanic: Missions — and see which end of the spectrum they end up on.

Like most MMOs, the activities surrounding Missions and the Agents that assign them to players form a large part of the EVE playing experience. For all that it’s ostensibly a game with a strong PvP element and in which the actions of player factions can shake the game world, a large majority of the players (and a vast majority of new players) spend most of their online time running PvE missions for whichever contacts will talk to them.


And if a player never worried about getting higher paying jobs or pushing the level of challenge they face, then they really don’t have to worry about anything beyond the basics; except for the (incredibly small) font in which the (remarkably long) mission description is displayed, EVE is just like every other MMO.

But let’s pretend, just a for second, that you’re the type of player who likes bigger payoffs and more challenge (not much of a stretch, I know) and dig a little deeper into Missions.

The “quest-bestowers” in EVE all have a number of important characteristics that determine everything from how much they’re going to pay you, how hard their missions are going to be, and if they’ll even talk to you. Every agent has a level, quality, and a faction/corp/division they are a member of, and all of those things affect what kinds of missions they’ll give you, as well as if they’ll give them to you.

Level: In short, the higher the agent’s level, the harder their missions (and the more the mission pays). For combat missions, this means that level 1 agents will send you against lowly frigates, while level 2 agent missions will throw Cruisers into the mix. At level 3 you will see mostly Cruisers and a few Battlecruisers and with level 4 agents you will be up against all sizes of ships, and lots of them.  By comparison, higher level courier missions mean larger deliveries (requiring bigger ships) and more jumps.

Quality: Agents also have a base quality, measured on a scale of -20 to +20, that can be increased and decreased by your relationship with them (the more they like you, the higher their effective quality becomes). Like their level, an agent’s quality can also affect how well a mission pays.

Also, an agent’s level interacts with their quality in some arcane, Voltron-like way, then faces off against your standing with that agent to determine if they’ll talk to you and give you missions.

Right. No agent (or player character) exists in a void in EVE (which is ironic, given the setting): every Agent is a member of one of EVE’s factions (the principle four being Gallente, Minmatar, Amarr, and Caldari). Within that faction, an agent is also part of a corporation or some other similarly-sized group (like a pirate gang). Finally, within that corporation, the agent will be part of a specific Division, such as Accounting, Astrosurveying, Internal Security, Public Relations, or Surveillance.

At last count, there were roughly 200+ npc “corporations” in EVE (counting mission-giving pirate groups), and almost two-dozen corporate divisions, so the possible membership and allegiance permutations for a given agent are fairly… robust.

You may not care about these factions, but rest assured that every one of these factions cares (to a greater or lesser degree) about you. Some may not think about you very much, but others will love you (assuring high-paying missions and other special treatment), while others may learn to hate you (meaning you’ll get shot on sight if you venture into their controlled space). Every time you successfully run a mission for an agent, your standing with that agent improves, and that standing “trickles up” and alters (to a progressively smaller degree) your standing with their division, corp, and faction.

Why does this matter, again?

In short, money. Higher level missions pay more and have higher rewards in general (better salvage, better bounties, better asteroid fields to mine inside missions, better everything), and you can’t get higher level missions from anyone until your standing gets high enough.

Now, if you think “that’s fairly complicated, but not that bad”, here’s the kicker: this is only a small part of it. It’s not enough to get your standing high enough with a faction (or corp); you need to be aware of what division an agent is with, because different divisions give different kinds of missions.

In EVE, there are four basic kinds of missions: Courier missions (moving goods from one station to another, per assignments with varying levels of complexity), Encounter/kill missions (exactly what they sound like), Mining missions (a subset of delivery missions that specifically deal with various types of ore), and Trade missions (which require you to provide the agent with the goods requested in the mission briefing — how you get them is your problem).

But not all agents are the same — the division of which they’re a member will alter the odds you getting certain kinds of missions. For example, Accounting agents just LOVE to send you on courier missions, but they’re not interesting in mining. Conversely, you can expect someone from the Intelligence division to rely heavily on Encounter/Kill missions — what you might not expect is that someone from Legal tends to solve problems exactly the same way.

You see, before you worry about what faction, corp, division, quality, level, or standing an agent has, there’s a whole different Agent challenge you need to deal with.

Unlike almost any other MMO, there is really no such thing as “quest flow” in EVE; sure, when you create a character, you are presented with a half-dozen trainer-agents in your first station, all of whom end their time with you by encouraging you to see out a representative from the Sisters of Eve to start a 50-mission-long epic arc.

After that, you’re on your own, and without a few tips or at least some kind of outside influence (for instance, beginning your search in your corp’s home system), there’s really nothing that tells you “where to go now” or who to talk to next.

One of the two main ways to find Agents is with the Star Map. This is perhaps the easiest way for new players as it shows you all agents currently available to you throughout the EVE universe and (most importantly) their concentration, increasing the ‘glow’ of any star system where there are many viable agents. If all you’re looking for is a level 3 agent of any kind, and don’t care who they work for, this may be the way to go.

On the other hand, if you’re looking for Agents specific to a certain faction or corporation, you can use the corporation’s info window, which lets you navigate to the “Agents” tab to view all of the corporations’ agents everywhere in New Eden and whether or not they are available to you.

Both of these methods work well enough (I prefer the corp-window, personally), but they are a far, far cry from a typical MMO with easily identified quest hubs and a smiling barker at the exit who says “Oh, you’re all done here? We’ll let me give you a quest that will take you where you need to go next…”

No. The only exclamation points in EVE appear at the end of damage reports.

Higher quality/higher level agents won’t EVEmail you or contact you in any way when they become available; you have to do the legwork and research yourself, find them, then figure out how to get to them.


It’s also up to you to do the work to woo an agent who won’t yet talk to you. If the agent interesting you is not yet available, you can view their information by using “Show Info” and at the bottom of their agent info tab you will find the required standing to get missions from them. After that, it’s up to you to raise your standing with their corporation by running missions from available agents (or by giving yourself a boost to your effective standing by picking up appropriate Social skills).

The message it sends is clear: pilots are a dime a dozen; the agents don’t need you — you need them.

It would be easy to look at EVE’s system for agents and say “Guys! Step into the 21st century! How about a few tips about where to go next? How about just having agents EVEmail you when your standing gets high enough to access them? How about anything to make the whole thing a little bit more intuitive?”

And anyone who said that would not be wrong.

There is a certain kind of culture within EVE that makes the Agent/Mission system feel as though it’s working exactly as intended. EVE’s entire mindset is very much “do what you like, but your fun is ultimately your responsibility”; it doesn’t matter if you want to PvP, take over wormhole systems, mine all day, or ‘just’ run missions. Regardless of what activity you choose, tools have been provided and the means to accomplish your goal is there, but the work and effort and in fact momentum is all your responsibility.

Put another way: all the toys you need are already in the sandbox – what you build with them is up to you.

Missions – since they’re presented as assignments from an outside agency – may feel like they should be different; a little more ‘intuitive’ (a phrase that often translates to ‘please hold my hand’), but in EVE everyone (and every activity) is intended to require (roughly) equal levels of effort for (roughly) equal rewards, which means that — for EVE — the way that missions work is exactly how they should work. The system might (and probably would) feel completely broken in another game (even openly hostile), but in New Eden, it fits — the end product a result not of developer laziness, but careful design; so that even the act of getting a mission (let alone completing it) is a challenge.

You may peer at the star map in confusion for awhile. You may scowl at the long, long list of agents who will have nothing to do with you (displayed in a blocky, sans-serif, 6-point font — seriously, CCP: update the GUI). But, if you do the work and sacrifice a little brain sweat, the reward (both in-game as well as from the sense of personal achievement for figuring the whole thing out) is hard to match.

Talk to the average EVE player: they wouldn’t have it any other way.