I’d intended to just pop in and check a few bits of to-do, but a quick greeting in comms leads to an invite into an ongoing fleet lead by several pilots I don’t know, but flown in by several I do.

“It’s Ty,” one of the other pilots replies, before I can speak up. “He’s got his own corp, but he flies with us a lot. He’s good.”

And that was that.

The doctrine for the fleet was “cruisers, with some fast tackle support.” Normally, I’d bring tackle in that situation, but I was informed we already had plenty before I’d even proposed it, which left me looking over my cruiser options of which I had only a few, handy.

The problem with cruisers right now (at least for me) is that they’re all going to get quite good in a little more than a month, so unless I know the ship in question is already about as good as it’s going to get, I’m loathe to fly it right now. I don’t mind losing ships (at all), but it bothers me to lose them simply because they aren’t currently good and would have survived if I’d just waited a few weeks. All those kinds of ships are waiting for me (and December) in a market system hangar.

The only ships immediately handy include a Rupture and two Stabber Fleet Issues. The Rupture is currently set up for a weird remote-rep fit that I’ve somehow managed not to lose (and which is useless for the current roam), so I discount that. The SFI’s are another story, as they are both (a) good ships and (b) not getting tweaked next month. The first of the two is a soloing-fit that wouldn’t fare well against the damage a decent sized fleet would attract, so I settle on the second ship, much slower, but heavily tanked and ideal for survival in the face of withering incoming fire.

We wander the war zone for a while, but pickings are slim and what few ships we do snag are far too fast for my sleek, aerodynamic brick to chase down.

Finally (and, again, just like the previous two outings), we find ourselves near home, where most of the action has been happening lately. Scouts report a few ships locally, but in a complex too small to admit our cruisers. The FC glumly advises people to reship and hurry back. I speak up.

“I have lots of destroyers right here in system.”

“… okay! New plan! Everyone send Ty some money and dock up at his station. We’re going to steal his shit and kill some ships.”

A few ISK transfers later and we’re in warp to the complex in a fleet of Thrashers with suspiciously similar names. The targets warp away as we enter, and our rear guard reports enemies landing back at the entrance gate to the complex.

We can’t warp directly back to the gate (one of the ‘features’ of a complex), so the FC orders us to ‘bounce’ out to an orbit around the sun, then back to the complex entrance. Imagine our surprise when we land on the sun and see an entirely different fleet waiting for us. They aren’t war targets, but they seem perfectly willing to engage anyway, so let’s call them nascent pirates. 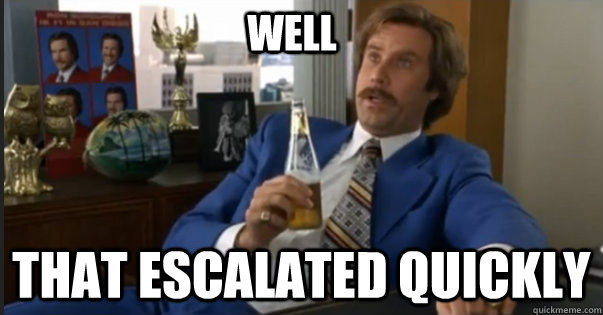 This fight goes well — we take out all their fleet, but the war targets that had been at the complex warp in and complicate matters, turning the whole thing into a grand melee. Pretty much everyone loses their shiny new destroyers, but the fight was a good one all around, and a fine way to end the evening.