First, before getting into the “thinking” part, I’ll just embed this silly song with clips from a bunch of spaceship shows. Pop on some headphones and enjoy yourself. 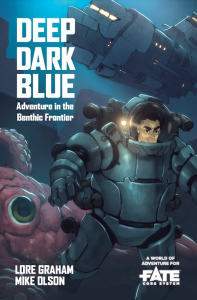 Yesterday, the Evil Hat guys released a new “World of Adventure”; I’m a patron of the project, and thus far I have not in any way regretted my four bucks a month. While only a few of the books have been one hundred percent, out of the park grand slams for me, personally (Nest and Save Game spring to mind), I’ve found enjoyable and useful ideas and content in most everything.

The newest release, Deep Dark Blue, might be that rare bird – both something I’d want to run straight out of the box (remarkable, since I generally hate underwater scenarios), which also contains bits I’d happily lift and use in some other game.

The “liftable” thing in this case are the rules surrounding the submarine the players will crew, and the way in which the crew interacts with their vessel. The designers did a really nice job setting up what I think of as “shipboard drama” mechanics, in which the cohesiveness of the crew mechanically affects the ship’s general effectiveness. (For example: the captain’s ability to lead affects the ship’s stress track, and the collective “team stress track” (which can be harmed by manipulation and discord) can be used to soak damage that would otherwise harm the ship.)

As I said, it’s a compelling idea – one that plugs right in to how I see stories like Firefly and Farscape and BSG – and since I’m currently running a Star Wars game, one of the first things I thought upon reading it was “should I port this over?”

The answer, surprisingly, was “no.”

As I said in comments on Deep Dark Blue, yesterday:

I’ve come to realize that Star Wars, in default mode, isn’t really this kind of “spaceship scifi.” (One of the reasons I didn’t set up a big complicated ship-designing sub-system for the current game.)

It feels weird to say, given how big a deal and how iconic an x-wing or the Falcon is, but in terms of it being a ship-based drama, in which the dynamic of crew and their vessel is central, it’s just not that kind of thing, by default: the ships, while sometimes important to and emblematic of certain characters, generally just get you around and let you shoot guys.

And, later in the conversation:

Or, to say it much, MUCH more succinctly, in Star Wars, the ships matter, but crew dynamics do not, and mechanics aimed at crew dynamics (ship stress built from crew unity, for example) aren’t really scratching an itch Star Wars has.

I can’t decide if this realization is more surprising, or the fact that I took this long to notice.

Consider a situation where you’re starting up a new Star Wars game with these kinds of mechanics. People make up their heroes and at all times during the process, we try to focus on the fiction the game’s supposed to emulate. We get a retired clone trooper, a semi-legit transport pilot with a crappy ship she’d be happy to replace, a Naboo noble on the run from the Empire, and so forth.

Then we try to shoehorn this entirely legitimate and tonally accurate Star Wars group into the Deep Dark Blue ship mechanics.

“Umm… well, Akana’s the pilot and owns the ship we’re on.”

“laughs Yeah. That’s not really her thing. Why do I need that?”

“Well, you don’t need it, but it helps your crew work together and increases certain –”

“Crew? I fly the ship pretty much on my own.”

“Right. Kelvin fixes things, but everyone else is pretty much just… passengers. Like on the Falcon.”

And Akana’s player is totally right – that’s how Star Wars works. Firefly-style crew-as-dysfunctional-family? That’s not a thing. BSG-style master-and-commander life aboard a naval vessel? Also not a thing. Ships are cool and important, but that’s just not a dynamic basic Star Wars cares about.

(Note: You absolutely could do something like this in Star Wars; the WEG-era Darkstryder Campaign did it, and I’d be happy if Disney did something in that style with a spin-off movie, in the style of Rogue One – but if your aim is a ‘classic’ Star Wars game, then this isn’t part of that.)

And again, I’m a little surprised it took me this long to realize it: it’s been there, right in front of us, all along.

There’s no place to sleep on the Millenium Falcon.

I mean… yeah, sure, there probably is, but we have literally never seen that space in anything but “schematics of Star Wars” and RPG books. Hell, there’s only one flat surface where you can sit a plate down and eat something, and it’s the size of a hotel nightstand. All the stuff that has to do with people living – the kitchen, the head, the bunks – it’s not there, or (more accurately) it’s not important enough to show. The Falcon is a ship for getting from one place to the next, and sometimes shooting guys in between.

Hell, for all it’s supposed to be a tramp freighter, it doesn’t really have any cargo space. Dig around the deck plans for Star Wars ‘transport’ ships as long as you like, and you won’t find more than 2% that actually look like they could do the job they were meant to do, because the maps have to match the exterior, and the exterior of Star Wars ships follow an aesthetic of cool pulp action that has very little to do with day-to-day livability.

It’s one of the reasons, I think, that the biggest Star Wars ‘tv series’ (Clone Wars) focuses more Band of Brothers-type stuff – the only time we see ships, they’re shooting at each other, taking off, or landing. No one lives in the things. Rebels tries, at times, to push things in that direction, but it doesn’t work at least in part because you can’t portray and build a crew-as-family dynamic (even with Hera, the best space-mom ever) when you have no place on the ship with enough room for everyone to sit down at the same time.

(Contrast Serenity: Can you picture the cargo bay? Does it feel like a real cargo bay, on a ship meant to haul cargo from place to place? Where does everyone sleep? Do we ever see those spaces? Do you know how the toilets work, and where they are? How about the kitchen?)

I’m not in any way saying that one type of “spaceship story” is better or worse than another – I like em all (even Star Trek, a little), but it’s really important to be aware of the kind of stories the setting (and design aesthetic) assume, and work out mechanics that match those expectations.