Pretty much since the beginning of this school year, Kaylee has been assembling a short list classmate/friends who have some RPG experience, or interest in same. However, nothing was really happening with that until the last month or two, when she and I hit on the idea of doing a game of Masks.

Right away, this presented some interesting challenges.

As someone who typically finds myself in the GM chair, I found my hands tied when it came to orgainizing the game – I only had contact information for one player (my daughter), and in any case I wasn’t about to start texting random thirteen year olds I’d never met, setting up get-togethers at local coffee shops – that’s a hell of a good way to get angry parental phone calls (and with good reason).

(One of my regular players in the Monday night game said I should just explain to parents that it involves Dungeons and Masks, and everything would be fine. Hmm…)

So it fell to Kaylee to gauge interest, get commitment, explain the game at some basic levels, and organize the first session.

In all these things, she was a STAR. The only help I threw in was, late in the process, sending over a link to a set of basic slides with high-level intros to the playbooks, and I honestly didn’t know if that would even be of use.

When things started to shape up, we ended up with four interested players, all aged ~13, in eigth grade:

Of the kids, only JC2 voiced much character preference ahead of time, but they voiced it loud and clear: Fire powers, driven by emotion. (Kaylee predicted a Nova playbook, or possibly The Star.)

Kaylee was, until about a week before, holding back on any character concepts – taking what I think of as a kind of ‘veteran player’ stance of “I’ll wait until everyone else decides what they’re doing.”

I pointed out that while that might work with a group of players with more genre and/or gaming experience, THIS group might benefit from demonstration – more specifically, I told her I was hoping to start off character generation with her, so her friends could see what was coming.

I also pointed out that picking a character who was a little more experienced as a superhero might be a good idea, because she could then bring her knowledge of the game and setting into play.

This proved to be all the constraint she needed to take off like a rocket, and she filled the next few days with discussions of background and history.

All I had to do was prepare to run a game for table of 13 year old girls, so… new experiences all around!

Kaylee was basically vibrating with anticipation by the time Sunday rolled around, and to be honest I was looking forward to it as well, but before we headed out to our local game/coffee shop rendezvous, I cautioned her that the Rules of Gaming Schedules would prevail, and she should be prepared for people to be late or, come to that, simply not show up. I didn’t want to kill her excitement, but better ahead of time than in the middle of the game. I’m a stoic; sue me.

Sundays at Enchanted Grounds are busy, but I was able to reserve a table for the morning, and we got set up before JC1 showed up. We already knew JC2 was going to be a late, due to a sibling birthday, so we loaded up on caffeine and got rolling.

Kaylee had already settled on her playbook, and it turned out JC1 had as well, thanks to the slides I had put together. (I was pleasantly surprised and glad making the thing hadn’t been a waste of time.)

So, with playbooks in hand, the two started working on their sheets. 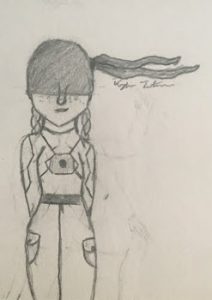 Abilities
You are someone’s protégé. Your powers somewhat mimic theirs, but each of you is in some way unique.

Mentor
Sil’s mentor is Vigil, who’s somewhere between Oracle and The Question for one of the city’s premiere adult superhero teams.

She does not do sidekicks.

Backstory
Casey wasn’t born blind. Her mother died shortly after she was born, due to complications with the birth itself. Her father tried, but being a single parent was overwhelming; at some point in her early childhood, there was a bad car accident. Maybe he dozed off, maybe he was drinking. Casey tries not to think about it.

The accident blinded her, and that added complication to their lives proved too much for Casey’s dad, who abandoned her to child services and a series of orphanages and foster homes.

Things were… not good, but somehow Casey’s positive (albeit sarcastic), bounce-back attitude kept her going.

Then her hypersenses started developing. THAT was fun.

In a way, she was lucky – if she’d had to deal with vision on TOP of all the other sensory overload, she’d have probably gone crazy. As it was… she had a rough couple months.

(Casey could find a silver lining around a tornado.)

She’d never really been very good at people coddling her for her blindness, but now that she could somewhat function with her other heightened senses (the flipside being she had to be careful not to be overwhelmed by too much input), she decided to get away from the foster system. Since she had superpowers… she figured she’d head for Halcyon City.

It didn’t take long for her to get into some trouble.

Finally, Kaylee picked out her Protégé moves, with an eye toward that ‘veteran’/leadership role she hoped to play.

Her mentor is also supposed to provide some resources to her and the team, but she decided to wait on that until she knew what was most needed. (I’m guessing a hidden base is on the list.)

Also, she drew up her character, which is awesome.

JC1 patiently let me run her through all the playbooks, and then selected…

… which is what she’d wanted in the first place.

HERO NAME: Palacene (both heroic and her ‘home’ name)
REAL NAME: Peggy J (She doesn’t really get how names work, yet)

Abilities
She can fly, and she’s pretty tough, also: 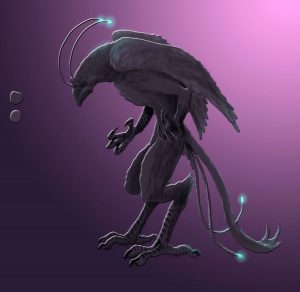 Both the shapeshifting and telepathy are native abilities of her people.

Kaylee and JC1 were both mostly done with their characters by the time JC2 showed up (family obligations). So… dad was a LITTLE bit right about that.

Anyway, JC2 is here! Also, she has a really strong idea for her character, and immediately grabs…

You all go to Phoenix Academy…

The players were all interested in an intensely school-focused game, so we’re using the “Phoenix Academy” playset from the Masks: Unbound sourcebook. Initially, this meant the next step in chargen was sketching out the faculty of the school and asking the players some questions.

I let them know about Hellbinder, the headmaster/demon parolee in charge of the school, as well as several other ‘stock’ members of the staff, and then went around the table asking questions:

After that, we went on to the standard –

When the team first came together…

This went pretty quickly. I first asked who the team had been fighting at the time. Kaylee remembered fighting Rampage in some other Masks one-shot, and thought they made a good one-and-done background enemy.

I asked Ember what part of the city had been destroyed during the fight, and found out it had been the downtown arts and theatre district.

Palacene let us know that the girls initially didn’t trust each other, but when Ember stepped out of the crowd and blasted Rampage off of Palacene at just the right moment, the trust started growing.

Finally, Silhouette explained that they stayed in touch afterwards through her efforts to keep communicating with supers her age, and the fact they were all going to Phoenix Academy. They’re not part of an official school club, just an unofficial clique – no school support, but also no school club rules.

After that, they mapped out relationships between each other (with three players, it went fast), and determining Influence (everyone has Influence over everyone else at this point, which is interesting).

We didn’t have much time at this point, so I framed them into a scene waiting for the ferry to take them to the Phoenix Academy island for their first day of sophomore year (2nd year there for Silhouette – 1st for Palacene and Ember). 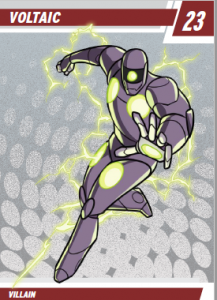 There was a bit of chit chat, until Silhouette noticed an ozone scent in the air and tingling static along her skin. She took stock (assess the situaiton), realized they were about to be attacked and, based on the environmental clues, guessed it was Voltaic – an AI who had gone rogue and decided the best way to keep humanity safe was kill all metahumans… what better target than a quay full of teen supers?

She’d read the files on Voltaic, though, and quickly let the team know they needed to get the thing into the water, before it could hurt anyone. Go go go!

Time to “Face a Powerful Enemy” – the girls decided Silhouette was the leader, Team points were generated, and we’ll start off next with a fight on the marina, surrounded by Halcyon City’s youngest supers.