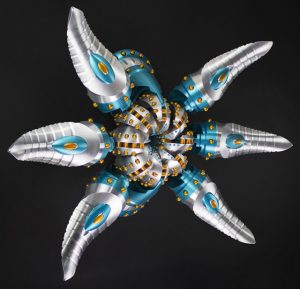 Charlotte faces the I of the Storm.

Charade is disarming traps around the Wound site. She confronts Doctor Infinity, whose tech is involved in the traps and who intends to send her back to her home time. Charade manages to spring some of the traps on the android. Ghost Girl, Mercury, and Jaysee confront Pandemonium. Charlotte conjures a talisman – a comb with an image of her mother – to attempt to gain control. Mercury attempts to save JC, but the pair have to go back to rescue Charlotte as well, and the storm strikes, leaving JC to parry it. Concord and Link quickly double-team Facet and Sablestar, leaving Jason Quill behind. Leo tears through Jason’s nano-armor, stunning and mentally dominating him with a backup of his teenage mind stored in the Heart Factory.