This weekend has been chock-a-block with face to face gaming goodness with cool kids.

Friday was the 14th session of Masks: Phoenix Academy game with Kaylee and the Jamies and, I think, possibly one of the best sessions so far. (Which is good, because we’re not going to be able to play again until something like mid-August. :sadface: )

Sunday morning had a return to the The Hollow-inspired game for Sean and Zoe and Kaylee (Ryu and Grace and Angel). Things are starting to come apart, and Mr. Weirdo came to them to ask for help(?!?)

And Sunday evening, we tried something new: a Hilda-inspired weird-little-town, with Sean and Zoe and Kaylee playing siblings who are all part of the family who traditionally deal with ‘weird stuff’ in the world. Mom and Dad handle the BIG weird stuff out in the world, because “the town kind of takes care of itself” – without realizing that it’s actually their KIDS who take care of the town.

Back in the old country, their family were the Swartwoods. Grandpa changed his name when he came here, though, so say hello the Smartwoods: Mar (Marzipan), Ken (Kennelworth), and Zo (Zoology) Smartwood. 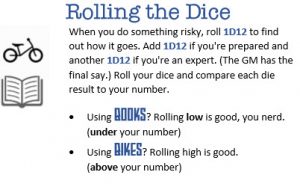 It’s basically a little bit Hilda (netflix), a little bit Courtney Crumrin, a little bit Goonies, set in the sort of town where this sort of thing happens and everyone sort of knows it, played with a Lasers and Feelings hack I made up called Bikes and Books.

The characters and game came together well and, after supper, we got ready for bed and played some more in lieu of bedtime stories. The Smartwood kids ran into a little trouble with the town deputies when Ken broke into the new Assistant Principle’s house to poke around, and they haven’t figured out why the town history seems to be … changing … but things are moving RIGHT along.