Last session, we talked with the village priest and buried the Burgomaster, which is about when we noticed the ghosts gathering at the graveyard gate, and I realized I knew one of them.

Specifically, it’s the spirit of Reinhardt, my old mentor.

I’m… guessing this next bit is going to suck a little bit. 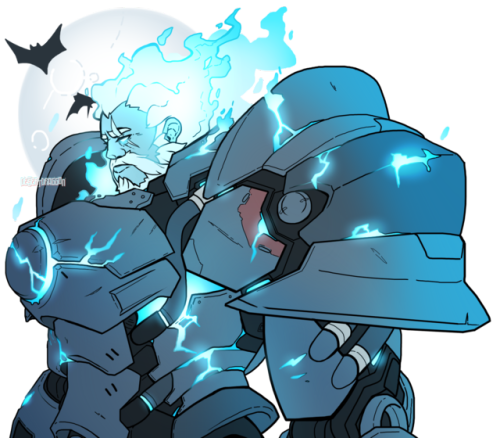 Brigitte does NOT want to approach Reinhardt.

First thing I’m going to do is Face Danger. I think there’s a chance I just can’t bear to approach my old mentor.

But no! That’s interesting and unexpected. Not sure what opportunity to open up here, and the oracles aren’t particularly helpful this time.

Reinhardt turns as I approach, and his vacant, waiting expression vanishes, replaced with a broad, albeit a bit sad, smile. I can’t help but return that smile, as always, though my eyes are damp.

I’m going to gather information. I’m not sure how much it can help. I don’t even know if the spirit can talk, but whatever.

My godfather’s smile immediately falls away. It’s worse than before – he’s not just waiting, he’s vacant – his face is twisted in mourning as he remembers something no one should have to remember – the moment they fell.

I need to Pay the Price here, and I think Reinhardt’s spirit is in trouble here, because of what I asked him, so I’m going to Test our Bond, because things between us can go badly here. 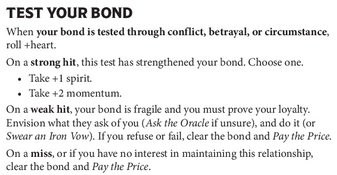 “No, Uncle!” I reach out, unthinking, and my hand passes through his shoulder, but somehow it gets his attention. He turns back to me. He is still sad, but he is not lost, and his hand rises to his chest, to his armor, and he taps the space over his heart. Eyes streaming, I do the same, and feel renewed.

I’m taking +1 spirit from this exchange, because it feels good to have that recover as a result of this. I haven’t learned much, but the bond with my mentor/godfather is strong. I’m also going to let this be a milestone on my backstory vow to investigate/avenge the freewardens, which fully tics the first box on that track.

Okay, so obviously I’m following the ghosts up the road at midnight. Fantastic idea – I don’t know what could go wrong.

In the meantime, let’s wrap up that vow to bury the Burgomaster – I’ve got 9 progress, so it should be an easy way to get the last XP I need for a new Asset.

“Oh no…” moans Ireena, looking over my shoulder as I return to them. “Oh, papa.”

I turn, following her gaze and see that the Burgomaster – silver-limned and sunken-eyed – also stands among the restless spirits waiting to walk to the castle.

“I will see his spirit at rest, Ireena,” I promise the woman. “I swear it. No matter what it takes.”

So I clear all but one progress and raise the quest to Dangerous. I’m also rewording it slightly.

That… kinda sucks. Not gonna lie. It’s cool, don’t get me wrong, but it sucks.

Okay, it’s moonrise, and hours until we depart. I don’t fancy hanging out in the church or the graveyard for the next four hours, so we’re going to do a bit of prep, and that means Sojourn. 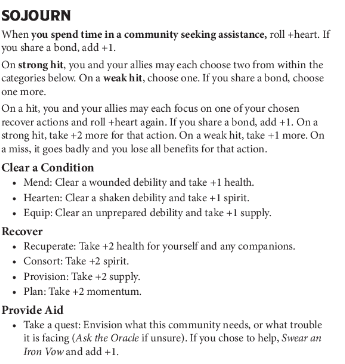 Well, that should get me by. With my community bond, that’s two selections off the list. I’m definitely going to Provision to get my Supply back up, and I’m tempted by Plan, but I think instead I’m going to Provide Aid and make another vow.

In this case, I make my way back to Mad Mary’s, knock on the door and, when the sobbing subsides, somewhat, murmur my vow through the door.

This is pretty good, since the strong hit gives me +2 momentum (back up to +9 after burning it on the priest). Between that and the resupply, I’m basically maxed out on all my resources as we head out of town and toward Strahd’s castle.

What could go wrong?

The climbing moon and the glances of Ireena and Ismark eventually get me going despite my reluctance. It’s not fear of the castle that has me dragging my feet, but of what I might see among the ghosts – who I might see – more farwardens.

Sadly my fears prove justified, as I see the sad solemn face of my friend Liqa among the many waiting spirits within the graveyard, and sigils of several other farwardens amongst the lost souls. She does not raise her hand or acknowledge me, and when the ghosts begin to walk up the road leading to the castle; she simply joins them, her expression resigned and tired.

“Did you know them?” Ismark asks, his expression a mix of confusion and concern, watching both you and Ireena (whose eyes are on their father’s faded form).

“Closely.” I say. “They are no threat to us, and we might learn more of what happened to them.”

We follow the spirits (both watching and trying NOT to watch those we know) for a few miles, winding through sparser woods toward the base of the nearest mountain peaks. It is an eerie experience. The ghosts largely take no notice of us – most don’t even seem to see us – but their presence is unnerving, and I find myself touching iron often.

We come, somewhat abruptly, to a fork in the road.