Okay, so I’m heading back up the street from the home of Mad Mary, to the tavern. The GM is droning on about atmospheric stuff or… you know. Whatever. GM stuff. They do that.

Now, somewhere in here, if you’re me (or most players I’ve played with since I was 10), you’ve tuned out the GM because you’re turning over what you’ve learned so far. (Or checking Pinterest for pictures of hot vampires.)

So let’s do that. The pondering thing, not Pinterest. What do we know?

Okay. Obvious facts that can be easily checked.

I head up to the bar, lay coin down for a drink, and say. “Ireena Kolyana. Who’s she to the Burgomaster of this town?”

I rate it “likely” a fact as simple as this will be shared for the asking without me needing to coax it out of anyone. I check the Oracle, which agrees with me.

The bartender nods to the boy who brought me, pours ale, but says nothing as you ask about Ireena Kolyana or the Burgomaster. He simply nods with his chin in the direction of the quiet man sitting near the fireplace. “There.”

Okay, it’s likely, but Barovia is a place of caution and paranoia. Fine. I head over. 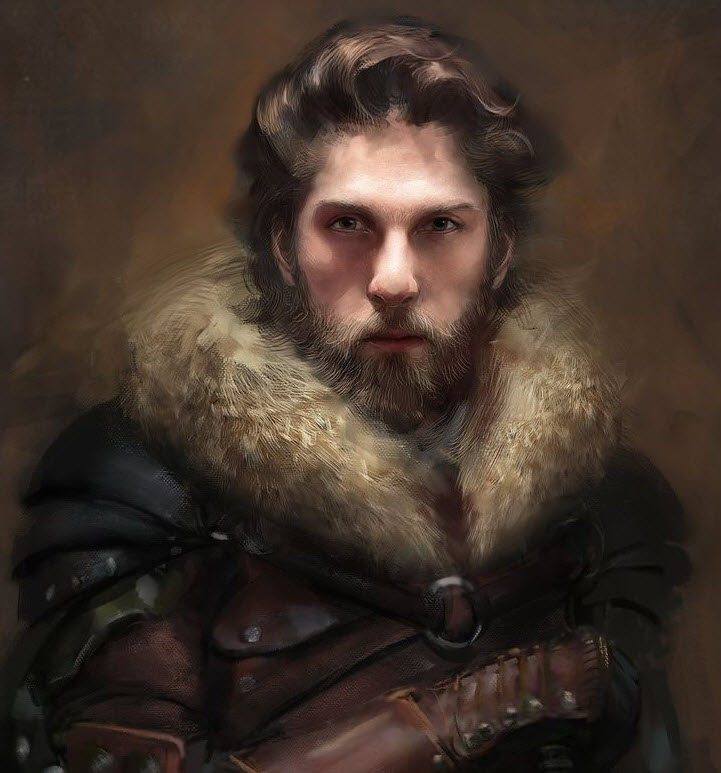 The young man looks up, but says nothing, as I approach – the locals seem quite tight-lipped, but he DOES react when I sit down and quietly ask him about Ireena.

“Ireena is my sister – adopted sister, if you insist. We are -” he pauses. “The Burgomaster was our father.”

Was. Fantastic. But at least I know which letter is true.

I pull out the battered letter I found on the tradesman just outside town and hand it over to him without any explanation.

I’m going for a Compel.

Okay, I’m going to get what I want, which is him opening up. I’ll roll right into a Gather Information with a +1, but I remember he wants something in return, which I’ll get to and agree to. 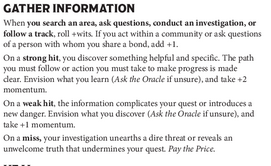 Well, okay! Strong hit with a favorable twist! I thought I knew what he was going to ask from me, but now I think I’m going to twist his request into an opportunity. We’ll see it coming here at the end of the conversation.

He looks mildly surprised to recognize the handwriting, but nods at several points as he reads, his expression increasingly grim.

“The Devil Strahd is fixated on my adopted sister – he’s been trying to take her away for nearly half a year – ever since he first saw her with his own damned eyes.”

“The Baron of these lands, or he once was. He’s ruled from his castle for almost 400 years, and is the last of his bloodline, though he’s hardly alone up there.” He takes a drink of his ale. “He’s all but waged war on us these last six months. As bad as it was before, when he neglected us, now…” He shakes his head.

“We had some protection thanks – my father believed – to a holy heirloom that’s been handed down to each Burgomaster, for centuries, but two weeks ago it was stolen, and a few days later, my father was killed.”

“Since then, it’s all we can do to keep our homes barricaded against assault, and pray.” He glances at me. “No offense, lady, and I can’t speak for anyone else in town, but *I at least was praying for more than one farwarden.”*

I nod. “I’d have asked for a company at least.” I reach over the table, extending my hand. “Brigitte.”

He looks a bit surprised, but smiles a bit and shakes. “Ismark Kolyana.” I move to sit back, but he holds onto my hand. His grip is strong. His eyes are steady on mine. “Take me with you. Whatever you decide to do, if you are here to help us, take me with you.”

He’s strong. Strong willed. And I like that smile – it’s a smile that says he might be able to hold himself together when things get dark. “Can you follow orders?”

He smirks. “Will you ask nicely?”

I roll my eyes, but my grip tightens a bit. “If I have to ask nicely, it’s not really an order.”

He tips his head in agreement. “Fair enough, and yes. Absolutely, farwarden.”

Alright. I’m going for this. 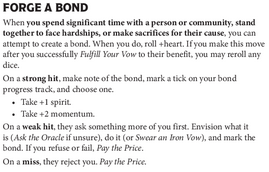 I maybe don’t technically meet the criteria here, but I like Ismark and I got a Strong Hit with a twist, dammit, so there it is – he asks to come along and I’m forming a Bond with him.

Dammit. I cannot catch a break on these dice. Man I could have used the Momentum, too. Ahh well.

Okay, so I still get the Bond on a weak hit, but he wants something from me. Either do whatever it is, or Swear an Iron Vow. Hmm.

Well, hell. I was going to wait on this, but I might as well get it over with.

Still holding his hand, I touch the other to the iron of my armor, over my heart. “I am Brigitte of the Farwardens, and I swear, now, on this iron, I will see this land free from the Devil Strahd.” 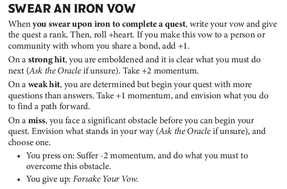 Okay, so first I’m going to swear the vow and write it out.

And… I mean… fuck it. I might as well set the challenge at Epic. It doesn’t get much more Epic than that. Finally, I’m going to attach a Threat to this vow (something with Strahd – I’ll figure out the particulars later), which is a really nice feature of Vows that’s being added in the new Delve expansion that’s in beta right now.

And I literally can’t ask for a better roll than that, so I’ll take it. That’s +2 momentum.

I release Ismark’s hand and sit back, but turn at a low, choked sound from the barkeep. His boy is staring, but the man has tears, actual tears, in his eyes.

“Bless you, farwarden,” says the barkeep. “Bless you.”

The Vistani at their table seem… less impressed, but one of their clan brought me the false letter in the first place, so I’m not exactly happy with THEM, either.

I’m going to mark a milestone for my vow to Come to the Aid of the Village, since everyone heard me just now and knows what and who I am. That brings my progress to four, and SIMPLY for the sake of cleaning up my sheet a bit, I’m going to risk it and Fulfill that Vow. (Note: This is stupid and I shouldn’t do it – my odds are bad, but I HAVE come to the aid of the village. I mean, I’m here, aren’t I?)

Ohthankgod. I complete the quest with a weak hit, which has me mark 1 experience for the Difficult vow, which isn’t enough to do anything with yet. HOWEVER, “You may Swear an Iron Vow to set things right. If you do, add +1,” and I’m pretty darn sure that swearing an Iron Vow to free Barovia counts, so I’m taking the extra XP. [Also, I’m taking a Bond with the Village as my third “free” bond that I just noticed I never took during character generation. Good thing I looked while I was writing down Ismark. The ‘free’ bond is with the Village of Barovia, thank you very much. Probably coming at that sideways, a bit, but something tells me I’m going to need all the help I can get.]

Ismark is still watching me. “Would you like to meet my sister, Brigitte?”

He nods, stands, leaves coin for the bartender, and the two of us depart.