After our conversation with Leif Lipseige, whining accountant, we set off up the stairs, following Leif’s general directions, and I hit the dice to Delve the depths. 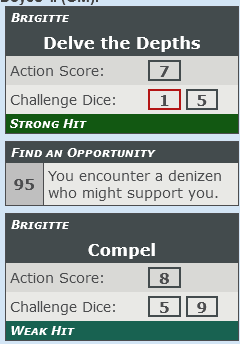 That’s a nice result. My Find an opportunity indicates I encounter someone who might support me. I give this a bit of a ponder (and check through the Oracle of the Ravenloft module) and think I’ve come up with something. (The Compel is explained a few lines down. Hang tight…)

We exit the stairwell at the next flight of stairs, head down a short hallway and through a door of delicately etched metal embossing.

Dust fills your lungs. The musty smell of death and decay swirls around you. Before you, a long table of polished oak lies beneath a blanket of dust. The rotting table cloth lies tattered beneath china plates and stained silverware. In the center of the table, a large, tiered cake leans heavily to one side. The once white frosting has turned green with age. Cobwebs drape like dusty lace down every side. A single doll figure of a well-dressed woman adorns the crest of the cake. A window in the south wall is draped with heavy curtains.

The room’s a bit of a mess, but what catches my eye is the movement on the far side of the table as someone gasps and hurries towards the doors to the north.

“Stop!” I call out. “We’re not here to hurt you.” (That’s a guess, but I don’t imagine I’m in a hurry to pulverize anyone whose first impulse is to gasp and run.

“Gertruda?” Ireena says, squinting in the gloom. “Is that you?”

It is. The daughter of the weeping “Mad Mary”, from back in the village. A quick check of the Oracle indicates Gertruda is largely oblivious to any danger to herself – she came here because she saw a castle in the distance and knew only good things of castles, thanks to years of fairy stories and tales of heroic princes falling in love with simple village girls. She’s been sheltered by her mother all of her life, and is innocent and naive to the point of being a danger to herself and others.

I’m less than charmed by the idiot girl, but I try to at least make an effort to be civil.

“Gertruda,” I say, “you’ve put a terrible fright and sadness into your mother. You need to go back home to the village. Now.” 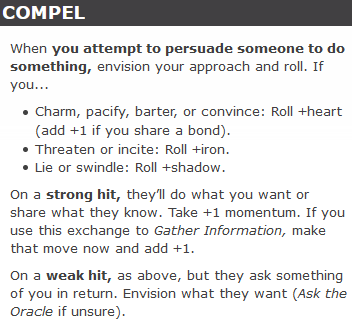 I try for that compel (see roll, above), but only manage a weak hit, which means she wants some in return from me. In short, she’s got enough sense to realize she might not have done the safest or smartest thing, and she sees a big armored freewarden in front of her.

But she’s not wrong, either. Dammit.

So, yes, fine, but we need to check out the room the accountant told us about. One more Delve the Depths move…

And, well, that’s pretty good, again. I choose to find some useful item – the thing the accountant told us about. According to the module/oracle, it’s the holy symbol of the Kolyana family, lying on a table in the study nearby.

A blazing hearth fire fills this room with rolling waves of red and amber light. The walls are lined with ancient books and tomes, their leather covers well oiled and preserved through careful use. All is in order here. The stone floor is hidden beneath a luxurious rug of a deep-patterned weave. A large, low table sits in the center of the room, waxed and polished to a mirrored finish. Even the poker next to the blazing fireplace is polished. Large, overstuffed divans and couches stand in order about the room. Two luxurious chairs face the hearth.

A huge painting hangs over the mantlepiece in a heavy, gilded frame. The rolling light of the fire illuminates the carefully rendered painting. It is an exact likeness of the Burgomaster’s daughter, Ireena Kolyana. Though the painting is obviously centuries old, the likeness is unmistakable. 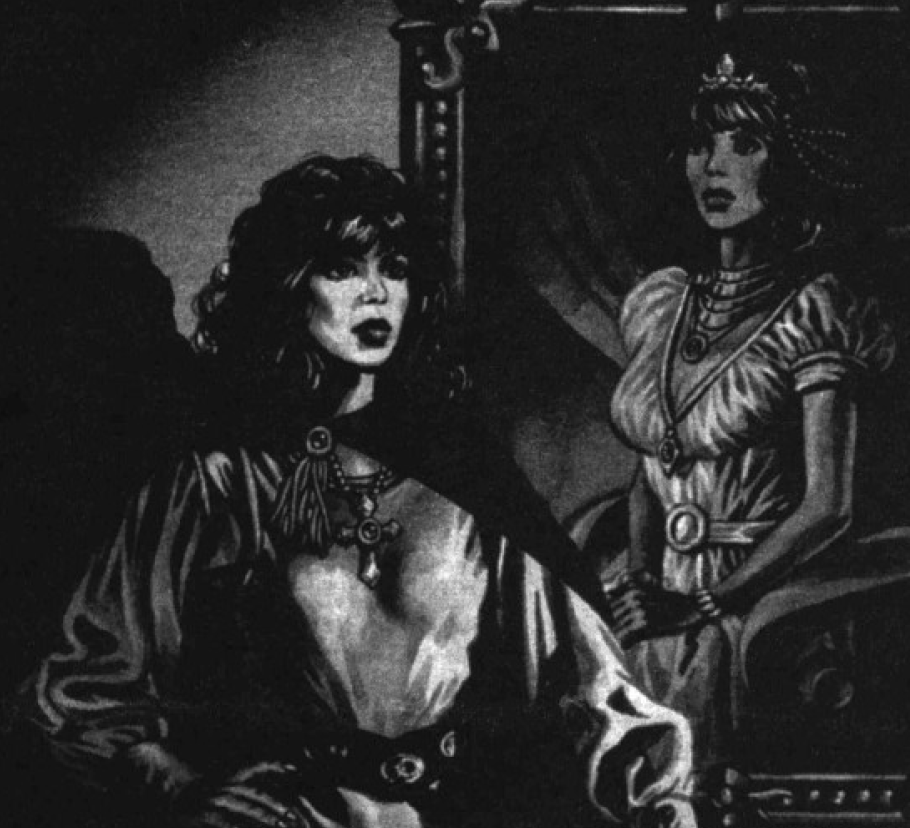 Another bit of the Delve “opportunity” move means I get to immediately make a followup move with a bonus, and get momentum on a hit.

So I reflect on the spirit of the Burgomaster being present, and the picture that looks just like Ireena, and decide this freaks Ireena out: she doubts everything, and I need to talk her down by testing our Bond. 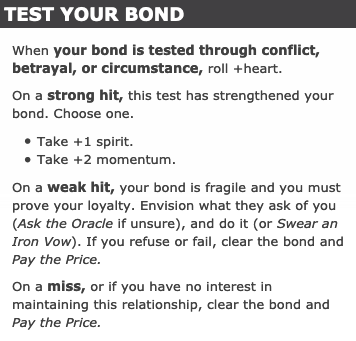 Well, lovely. That’s two more momentum and I’m counting this as progress on putting the Burgomaster’s spirit to rest – he sees Ireena has a loyal friend and ally. That’s hopefully enough progress, so let’ss see if I can’t wrap up that quest right here:

The burgomaster sees his daughter, sees how distraught she is, and sees her comforted by a friend. His soul finds peace, knowing his children are not alone in this dark world.

I’m keeping the “opportunity” this affords me simple: I’m going to use the XP I get from finishing this quest to pick up an a new aspect of one of my assets, or a new asset, right now, instead of waiting until I have some downtime – given what’s going on right now, I’m going to Ismark as a “Kindred” asset, for the same reasons as I had for finishing the Vow and putting the Burgomaster’s spirit to rest.

And now, thanks to Gertruda, it’s time to get the hell out of here. I’m going to Escape the Depths, using my Wits to retrace my steps. 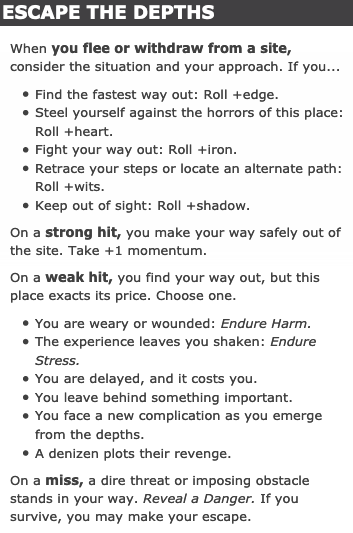 Okay, weak hit, because my dice kinda hate me. Fine. I’m going with “a denizen plots their revenge” and make plans for some kind of retribution sent out after me as soon as the dice offer any kind of opening for shenanigans while I’m back in the village.

Whew. Okay. We retrace our steps, stopping at Lipseige long enough to let him gawk at the Holy Symbol of Barovia, but he gets more than a bit miffed I won’t leave it with him. What the blazes did he expect? He got to see it. Call it good.

We hurry down to the main floor, and make our way quickly to the chapel (eyeing the gargoyles in the main entry more than little warily), and with one long last look at Reinhardt. Need to get his body out of here, but not this time. Not yet.

And then we’re back out in the courtyard and slipping through the dark and drizzle. It’s a miserable slog back down the road, but we don’t stop until we reach the village and the church.