I have this annoying little thing I do whenever anyone is telling me about some kind of personality conflict going on in the world.

Doesn’t matter if it’s Margie talking about stuff at work, Kate relaying the woes of multiple-sisterhood, Dave on the latest Episcopalian Brouhaha (a pairing of words so common I feel like it should get a trademark stamp), or Stan relaying the latest in politics —

I nod my head sagely and say: “Yeah… guild drama is the worst.”

Because, let’s face it; humanity thrives on interaction, and we’re all flawed in various ways, and the internet exacerbates those flaws — so as often as you’re likely to come into conflict when face to face, the chances quintuple as soon as the internet is added to the mix.

And what are MMO guilds? Big social constructs whose main product is an increase in Interneteraction.

Result? You will see interpersonal drama fifty times more online than in all other social gatherings, combined, and with that kind of weighting and repetition, it isn’t long before every OTHER kind of drama starts to look like something you’ve already seen online.

I spend a fair amount of time online. I’ve witnessed (and caused) my share of drama, going back as far as… 1991, when a friend and I nearly came to blows over some argument in a text based Star Wars mmo… and as recently as… well, last night.

I don’t like drama. I especially don’t like the effect it sometimes has on me, which is frustration that puts the Enter key on my keyboard at serious risk of mechanical failure.

So here’s the deal – I’m in a guild now that I don’t feel a lot of connection to. Decent enough people, but I just don’t feel like I know any of them. I already talked about this:

I’m acquainted with these guys, like people at my job, and they’re cool, but they aren’t my friends; not the way that Dismember or Yodi or Izmut were — or Mal or Sam or 76 were — or even Crystal and Staer.

Added to that was this thing where the guild had posted a need for some healing druids. I leveled a druid up, practiced healing, got geared up at no small expense (in-game) solely to myself, and told them “Okay… I’m ready! Put me in Coach”, and got back the empty sound of Nothing in return.

Right. No personal connection in what is an ostensibly SOCIAL passtime, and a lot of effort going to waste? Time to look for better options. 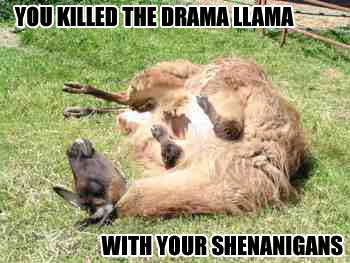 I’m on a smaller server, though, so I knew I’d have to look to other servers to find another option. In my poking around, I found a guild that not only seemed like a lot of fun, but which actually had a couple of my old friends in it — including the one guy I’ve really gotten along with this whole time.

And I posted to their forums, and the responses from the other guys in his guild were… well, it just clicked. I started making arrangements.

Last night, we have a raid going on, and beforehand I go to the head guy and tell him “damn, you just don’t seem interested in using this guy I’ve worked on. What’s up?”

There followed a conversation about the guild’s concern about me bringing my ‘alt’ and getting gear that someone’s ‘main’ might need. I assured him that I had no intention of asking for any gear beyond what would otherwise go completely unused — I just wanted to help the group out. Whatever.

((And honestly? I’m really not that worried about it at this point, because I’m thinking “I’m probably going to at LEAST transfer Syn to another server, if not both characters.” I just wanted to voice my thoughts.))

He said we’d talk later, and we got the group going, and not long after that, I get a /tell that says “Get Syn on, you’re healing this.”)

So I healed my first big raid (Serpent Shrine Cavern, facing the Lurker Below and Leotheras the Blind). It was fun. I learned alot (and the healing-boss-person said I was “Doing GREAT”, so that’s cool).

And on the last boss, two identical items dropped that I could use.

And someone in the group says “I’ll take one, in case I respec to healing.” (He is currently specced for damage.)

And there’s silence. One main said something, but there are two of these things.

So I say “Well, I’m in for one of em, if no one else needs em, for this guy.” Who is, as has been stated, an Alt character, and thus pretty much the crappy muck surrounding the bottom of the totem pole.

And just as I’m typing that out and hitting Enter, someone else says “I’ll take one too, in case I respec to healing.”

And someone quickly says in Ventrillo “You can’t get those if a Main needs em, Grez!”

Hmm. Bit over-emotional in the tone, there, but okay. Easy to diffuse.

“Why not?” someone asks.

“Well, that’s kinda dumb, he healed it, didn’t he? Those are healer items.”

“GUYS,” I say, “Seriously. I didn’t see the second person before I typed it. My bad. Don’t worry abo–”

Guild Boss Guy: “We’re going to give the second drop to Grezzk.”

Right. The best kind of game drama. Loot drama. (And don’t shake your heads at this online foolishness, tabletop players — the same damn thing happens in tabletops all the damn time, even in games without gear.)

1. I was all ‘even steven’ with the guild until last night — my time invested in raids perfectly ‘paid’ for the loot I’d gotten (you can go in the hole for items that drop and sort of pay it back later, though it would take some guys like… five months to do so). Now, I am not.

3. I got the gear, and I quote, “Because Syn getting it will be the best benefit to the guild in the long term.”

… so… how the hell do I transfer to another server NOW?

Unfortunately, while the raid was nice and all, I’m still stuck with this:

4. I don’t know anyone in the guild, really, or feel like there’s any sort of connection.

(A Side Note: is the concept of an “alt” vs. a “main” really… viable? I have two similarly-geared characters with completely different abilities, and I’m willing to bring either of them in, as needed. Am I, the player, not the character, the real asset to the group? Yes, obviously that is the case, if for NO OTHER REASON than the fact that the character’s can’t play themselves. Why not assign loot to the PLAYER who has the most ‘points’ to ‘buy’ the drop, and leave it at that?)