So I’m pondering Dungeon World with only one player, but player characters in DW need bonds with other characters, and maybe I can solve this with… companions? Persistent NPCs the player’s character can interact with in depth? This tickled something at the back of my brain – a region scientifically known as “that bit that makes me give BioWare too much money.” As I’ve mentioned, I like Dragon Age (the RPG) and that’s at least partly because I love the setting for the Dragon Age video games – Thedas is a rich setting, and more than that it manages a potent mix of fresh invention and classic tropes – one might almost say cliches – of the genre; in many ways, there’s nothing especially new about the world BioWare presents in Dragon Age. Rich history, countries VERY OBVIOUSLY AND DIRECTLY based on real-world cultures, a rising evil, and a hero leading a motley band of misfits to save the world. It has, to put it lightly, been done.

In short, it occurred to me that if I wanted to front-load some kind of heroic fantasy “thing” in a world with which I was quite familiar and which I already associated with the kind of “hero plus a double handful of role-play-linked NPCs”, I could hardly do better than starting with Thedas. 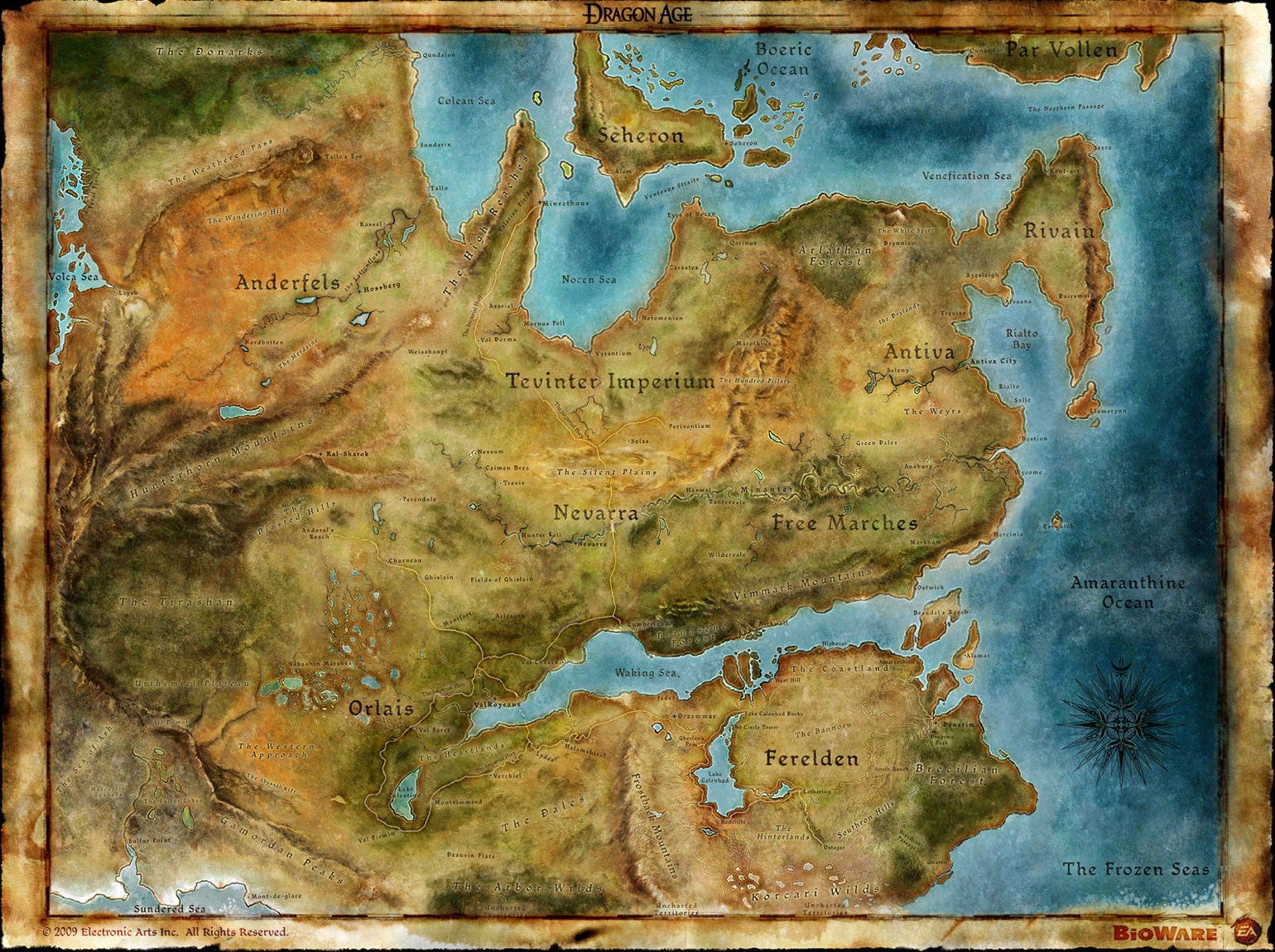 With that said, there are all kinds of potential red flags with using this sort of solution with Dungeon World, mostly having to do with the fact that the game expects a lot of world building to emerge in play. But I had a pretty solid counter argument to that:

Still, I needed to make sure Kaylee agreed, so one evening we sat down and I went over the setting from roughly -6400TE to Sometime Yesterday Afternoon to see if anything in there sounded cool.

Result: LOTS of stuff sounded cool to her. The challenge then shifted to narrowing down to one or two places (both physically and temporally) that really grabbed her. We eventually winnowed it down to:

We also talked about the various countries, and she really seemed to dig the reverse feudalism of Ferelden (where a noble’s job – one they can easily lose through incompetence or negligence – is essentially to protect local land owners and other civilians from predation, in return for… you know, payment).

So knowing she was into Grey Wardens, thought the Qunari were pretty cool, liked the idea of fighting a Blight, and liked Ferelden, it seemed pretty obvious we could basically start off in the same time-frame for Dragon Age: Origins, and then see how far we can blow those events to smithereens and do our own thing.

Thinking on it some more, I came up with a basic list of things to watch out for, and how to deal with them.

But mostly, I don’t think I need to customize things. As much as I like the Dragon Age RPG, there are lots of different game-system ways to present Thedas, if you focus on the fiction.

“Focus on the fiction” is one of those tricky rules-that-don’t-look-like-rules that tend to crop up in Lumpley games, and it kind of tripped me up in our first session, which I’ll write about next.